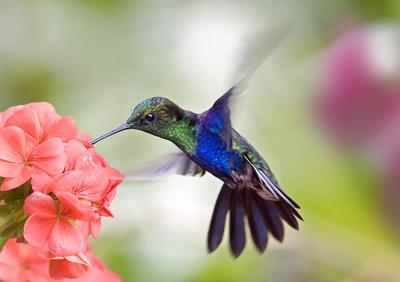 Saw the season’s first hummingbird yesterday.  He landed on a dogwood branch, just past my window.  The sun caught him from behind, turning his back an iridescent blue. Although we’ve been expecting hummingbirds here for a couple of weeks now, this one’s arrival still managed to astonish me.

I’m not sure it’s the birds themselves that are so arresting, though their electric speed and superabundant alertness never cease to amaze.  So does their story.  Hummingbirds that summer here migrate from as far away as Central America, flying up to 25 miles per day.  It’s said their wings can beat 85 times per second.

All this is wonderful.  But what may matter more than anything is the sheer fact of the hummingbird’s arrival.  It’s like a declarative sentence.  Spring is here.

Most years the coming of spring is not exactly headline material.  Winter ends and snow melts.  The first buds appear.  One day you look up and realize the world’s turned green.  You’re not wearing winter clothes.

The pandemic’s altered this routine.  Indiana’s first stay at home order took effect on March 23.  What had been a relatively mild winter was sputtering but still hanging on.  Since then we’ve had one and then another call from the governor to shelter in place, as the known numbers of infected people have jumped from day to day.  We’ve heard about surges and flattening the curve.  And been told that staying home is actually brave.

I was reminded of P.J. Hoff.  He was a cartoonist who doubled as a weatherman on Channel 2 in Chicago when I was a little kid.  Long before psychedelic green screens, P.J. would illustrate the weather by drawing cartoons on a giant pad of paper.  One character he often sketched was called “the Vice President In Charge of Looking Out the Window.”   This, it seems to me now, is an apt job description for many of us living through the COVID-19 quarantine.

When looking out the window becomes your occupation, the change of seasons is news in a way that makes what you see on a screen even more abstract than usual.  This does not discount the actual toll this virus is taking.  So far we can only guess the costs and there is no telling when this will end, or if “end” is even the right word for what is still to come.

According to CNBC, a Simon Malls internal memo indicates Simon wants to reopen a number of its shopping centers, including Lighthouse Place, its Michigan City outlet mall, around May 1.  If true, this might not only jump state and local stay at home orders, it could constitute an attractive nuisance, as Lighthouse Place draws a significant number of out-of-state shoppers.  This used to be considered a good thing.  It made Lighthouse Place a “destination” — another word whose meaning has become a lot more complicated.

I know Michigan City is desperate to get back to something like normal.  I know people are desperate for the work.  It’s spring.  The weather is getting warmer.  I wish this could be like seeing the hummingbirds, a sign that change is here.  But I’m not ready to stop looking out my window.  Not yet.