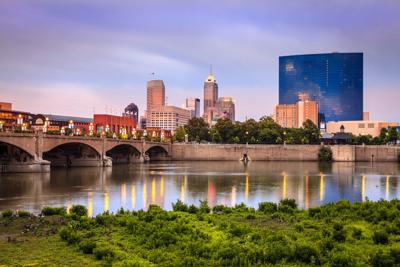 On June 7, 1820, the members of the State capital selection committee located Indiana’s new state capital at the confluence of the White River and Fall Creek. This is where on February 26, 1820, War of 1812 veteran John Wesley McCormick, Jr., arrived with his family and his brothers James and Samuel at the east bank of White River, near what is now 10th and Washington streets.

Jeannette Covert Nolan, in her Hoosier City: The Story of Indianapolis, published in 1943, lets us in on the politics of the time. “Probably most citizens thought the capital would be in the southeastern part of the state, where the settlements were.”

She cites Corydon as the most likely location since it had the distinction as the seat of territorial government since 1813. But then again, Vincennes could lay claim to its long history.

“But,” inserts Nolan, “Governor [Jonathan] Jennings and a faction of Indianians had their own — and different — notions. In time…the entire state would be populated; these stretches of virgin forest were only temporary. This was the moment, contended Jennings, for envisaging future needs rather the present conditions.”

Thus, Nolan leads us into how Jennings implemented his concept, formulated as early as 1815 when he obtained from the federal government “a donation of land on which to locate a permanent capital,” which for him had to be in the center of the state. Nevertheless, while acting with due diplomacy, “Governor Jennings hoped that the commission often named by the [Indiana] legislature to make the selection would look carefully at the scattered cabins on White River at its junction with Fall Creek.

He intended that the commission should do so,” she inserts emphatically.

And they did, after looking at other proposed middle-of-the-state sites, including the Bluffs of White River, near Waverly, where pioneer trailblazer William Wetzel built his cabin, about sixteen miles below the mouth of Fall Creek; and most certainly at the site of William Conner’s well-known trading post in what now is Noblesville.

“The spring was wet and rainy in 1820,” informs Nolan, “and the commissioners had to delay their meeting until the roads dried. At last, on May 17, Governor Jennings rode forth from Corydon and headed for the west fork of White River and the home of William Conner where the meeting would convene.”

At this time, the Delawares, whose home-place had been along the White River, were still in residence. It would be later in 1820 that their forced removal would take place.

While Nolan does not mention the hospitality by Mekinges, William Conner’s wife of twenty years and a Delaware, her role is documented by Charles N. Thompson in Sons of the Wilderness: John and William Conner [1937,  1988].

Thompson notes,  concerning Mekinges, “In the hubbub of this …company of guests she moved quietly about, attending to their needs and keeping the children out of the way….”

Interestingly, the transformation of William Conner from Indian trader, husband to Mekinges and father of their six children, and son-in-law of Delaware Chief William Anderson, to a white man interested in a political career, would be part of the transformation of the wilderness at the confluence of the White River and Fall Creek, into the capital city of Indianapolis, on the site where the Delawares once lived.

Following the June 7 meeting to name the capital site,  to be built from the ground up, Nolan adds a postscript: “That same evening occurred an incident which seemed to augur well for the decision. At twilight a boat was seen on White River, nuzzling into the shore just below John McCormick’s cabin…”

“‘It was a small ferry flat,’ wrote Tipton in his journal, ‘with a canoe tied alongside, both loaded with the household goods of two families, moving to the mouth of Fall Creek.’”

Nolan adds, “Tipton and Governor Jennings must have exulted.”

Corydon continued as the state capital until January 10, 1825, when the state legislature convened in the newly built Marion County Courthouse.

If you miss a chance on June 7 to visit the site where a marker sits in White River State Park, you can celebrate more dates significant with Indianapolis as the capital city. January 6, 1821, the General Assembly approved the site selected by the commissioners and adopted the name ‘Indianapolis.’