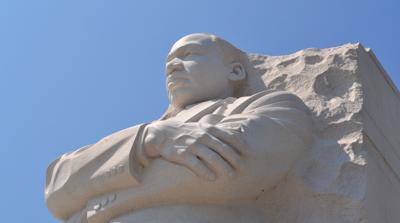 NUVO asked me to contribute a column. I’d written a weekly piece from 1993-2013, when I moved to Texas, so one more should be easy enough.

I was going to early vote in the Texas primary the next day, which should have been a good news peg. It was the last week of January, 2020, a time which in retrospect will seem not unlike early September, 2001. I had all kinds of colorful details from the day: an old man who’d seen President John F. Kennedy’s motorcade in San Antonio the day before JFK’s assassination; an old codger who insisted only Mike Bloomberg would be able to fix things for us; and a scary contingent of clear MAGA sympathizers ready to set fire to the polling place.

I got to vote for a man I admire greatly. I vote in every election but I’m definitely prouder to vote in some. This choice ranked with my first presidential primary vote was way back in 1984. I cast my preference for the Rev. Jesse Jackson, a personally flawed man but one who learned firsthand from the Rev. Dr. Martin Luther King Jr. on empowering poor people and workers. When King was shot, Martin’s blood was on Jesse’s shirt.

Bernie is certainly no Dr. King but his guiding principles are the same. If the moral arc bends towards justice, Bernie was going to help it move. The upside is phenomenal: generations whose ability to receive medical care doesn’t depend on wealth, whose ability to obtain higher education depended on academic ability and a president with a sense of morality.

Things were looking up that day for me, Tuesday, Feb. 25. Bernie was the front-runner. It seemed like a coalition was building that could propel a real-live socialist to the White House. It made me wonder what Jesse Jackson might be thinking. I saw a huge American flag at a business and I felt patriotic.

Of course, any longtime student of American history should know that it will break your heart. The Democratic establishment coalesced behind the most ineffectual candidate possible, Joe Biden, whose purpose seems not to win the presidency but to prevent losses in the House and Senate.

Just a few days later, after the silencing of Bernie, the real live Jesse Jackson appeared at a rally together. The live feed I saw didn’t show whether the song Kris Kristofferson wrote in the 1980s, lyrics which resonate today:

He was walking with your brother on the streets of Alabama

He was marching next to Martin when he died

Working face to face in Cuba and Managua Nicaragua

He did not yet beat the devil, but he tried

Where a man can hope a man will show some heart

There is very little heart being shown by our leaders today. It’s hard to tell if Trump wants to stop the COVAD deaths or not. Fewer poor people, black folks and white homeless people have been a stated goal of his for years. I even question his statements of prayer because he gives off a vibe straight out of a 666 horror movie.

The bad guys have won again. They never gave Brother Jesse Jackson a chance and Bernie Sanders never got a real one either. It’s a time to grieve for Sanders and ourselves and hope that one day a politician who shows some heart will prevail.

If we can make a single request, it’s that Hillary Clinton keeps her fucking mouth shut now and forever. By being the most unlikable candidate in history, she literally brought the Trump death and pestilence to the United States. And her sex-offender husband can shush too.

The one thing we can take pride in, as Bernie noted in his withdrawal speech, is that progressives are winning the ideological battle. Medicare for All is at least on the table for discussion. Workplace improvements aren’t dismissed out of hand. We’re a long way from smashing the corporate state and returning to democracy but Bernie brought these issues to the mainstream.

At their very best, Donald Trump is a criminal fool and Joe Biden the embodiment of the incremental mainstream.

That pretty much sums it up. The arc of justice bends toward the mediocre. But Bernie’s name will live in history with Eugene Debs, Dr. King and Rev. Jackson. Great men whose words will be quoted by historians for centuries.