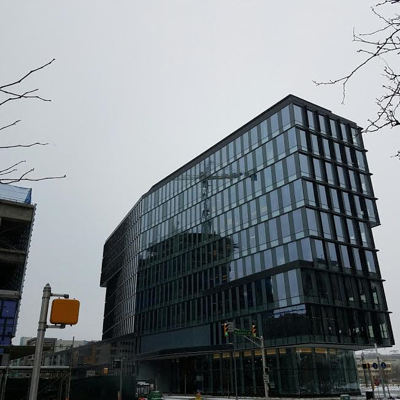 The last performance Elvis ever gave was at Market Square Arena in Indy, which no longer exists. In its place sits the Cummins Distribution Headquarters. The anvil-shaped structure has a smartly-curated array of art, but no black velvet Elvis paintings.

Architectural and Artistic Innovation (but no Black Velvet Elvis Paintings)

The year Presley died, 1977, was also the year my family came to Indianapolis. But my parents weren’t into the music icon. I can, in fact, say with certainty that they weren’t at Market Square for his last concert.

I was never into Elvis, and none of his songs have made it into my 220-song-long YouTube playlist. The Living Colour song “Elvis is Dead” has a space there, however. The song is a hilarious exploration of Elvis mania, of Elvis sightings in shopping malls and supermarkets. But there’s also a serious note; Elvis, after all, copped his repertoire from Black performers who never got near the level of adulation and monetary compensation as that the King (who, as the song points out, died “on his throne”.)

While Elvis was on the way out, the rocker Tom Petty was on the way in: his first album came out in Nov. 1976. While none of his songs have made it into my YouTube playlist, I’ve always liked his angrier songs, particularly “Refugee”.

The first scene in the film Echo in the Canyon, about the evolution of the California pop sound, features Petty talking with Jakob Dylan (son of Bob) in a guitar shop. They were fawning over a 12-string Rickenbacker guitar, the favorite instrument of Roger McGuinn, the lead singer and guitarist for the Byrds, a group that had a clear influence on Petty.

I think the film’s biggest contribution is that it shows how all musicians are stealing from each other; the Beach Boys stole ideas from the Beatles and the Beatles returned the favor. (There’s a wonderful moment in the film where Eric Clapton admits, before playing Stephen Stills’ “Questions” that the song heavily influenced his hit “Let it Rain”).

It’s a film that I’ve basically set on repeat — it’s on Netflix and I’m a new Netflix subscriber — while locked down during COVID-19. It’s one of the movies that makes good background while I’m typing away on my computer.  Call it “NetFlix and Skill”.

Anyway, not having seen such stars up close and personal in my life never really bothered me. But I’ve known a number of people who feel differently. That is, they feel driven to be close to stars of the stage and screen. This includes some of my mom’s New York friends who have New York friendships with the likes of Carly Simon and Meryl Streep.  A New York friendship, for those of you unfamiliar, means that — because you once talked to such and such in an elevator or a stairwell —  you are now best friends forever.

And that kind of friendship, I suppose, is what the following prose poem is about.

Joe and I were sitting at the bar counter at the Red Key when he started talking about his “friend” Tom Petty. “It was the fall of ‘89,” he said. “After Tom had performed at Market Square Arena, we were chilling in his hotel suite on the highest floor. In the room —  it overlooked the arena —  his entourage had pulled chairs in a circle and we were all having a good time, laughing,” Joe took a gulp of his Bud. “So the bassist Howie Epstein pulls out the biggest doobie I ever saw and starts passing it around. I have a toke myself and it’s not bad at all, Hoosier skunk, you know? But when it gets to Petty, he takes it and rolls it around looking at it, giving his classic smile, you know the one where you see all his teeth. And then he looks up at Epstein, and says, ‘Where did you get this?’ and Epstein says, ‘Got it back at the steak house; The waiter brought it to me with the shrimp cocktail.’ And Petty goes, ‘no shit,’ still looking at it, rolling the damned thing in his hands, and says, ‘Been trying to quit, but it looks like my band wants me to have one last dance.’ Then he takes a long inhale.” Joe chuckled, while I was thinking of the song’s lyric, “There’s pigeons down on Market Square / She’s standin’ in her underwear." And then I asked Joe, “So you’re saying that’s where Petty got the inspiration for “Last Dance with Mary Jane.’” “Yes sir,” he said. But our bartender, who was listening the whole time, was giving serious cut eye to Joe. “That must have been a big hotel room,” he quipped. “I’ve heard that story a hundred times from a hundred different people.”