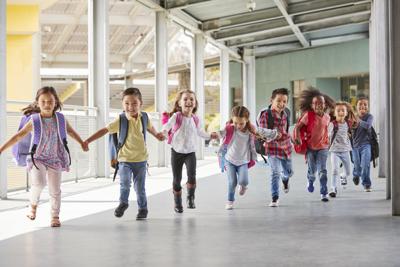 In its push to fully reopen schools this fall, the Trump administration has repeatedly pointed to guidance from the American Academy of Pediatrics, which emphasizes the benefits of in-person schooling.

Dr. Sally Goza, the organization’s president, was also part of a White House event on reopening schools earlier this week. Now, though, the group is distancing itself from the Trump administration in a joint statement with three public school groups.

“Returning to school is important for the healthy development and well-being of children, but we must pursue re-opening in a way that is safe for all students, teachers and staff,” reads the statement, also signed by the American Federation of Teachers, National Education Association, and AASA, the national superintendents association. “Science should drive decision-making on safely reopening schools.”

“Schools in areas with high levels of COVID-19 community spread should not be compelled to reopen against the judgment of local experts,” the statement continues.

This contrasts with rhetoric from President Trump, Education Secretary Betsy DeVos, and other administration officials who have called for a nationwide reopening of schools while downplaying public health concerns, even as case numbers continue to rise in many parts of the country. The statement is significant because it weakens one of the key arguments that those officials have advanced: that they are simply listening to the country’s pediatricians.

But despite the administration’s suggestions, there was always significant daylight between their positions.

The American Academy of Pediatrics’s original guidance said that the organization “strongly advocates that all policy considerations for the coming school year should start with a goal of having students physically present in school.” But the document makes clear that all decisions about reopening should be made with public health considerations in mind.

“It is critically important to develop strategies that can be revised and adapted depending on the level of viral transmission in the school and throughout the community and done with close communication with state and/or local public health authorities,” it says.

Goza, the AAP president, also said in an interview with NPR Wednesday that schools shouldn’t be forced to open in places where virus caseloads are surging.

Trump has not offered those caveats when he has said that schools must reopen, and threatened financial consequences for schools that don’t follow through. He reiterated this view in a tweet this morning: “Schools must be open in the Fall. If not open, why would the Federal Government give Funding?”

The Friday statement from the AAP rebukes Trump without mentioning him by name.

“We call on Congress and the administration to provide the federal resources needed to ensure that inadequate funding does not stand in the way of safely educating and caring for children in our schools,” it says. “Withholding funding from schools that do not open in person full-time would be a misguided approach, putting already financially strapped schools in an impossible position that would threaten the health of students and teachers.”