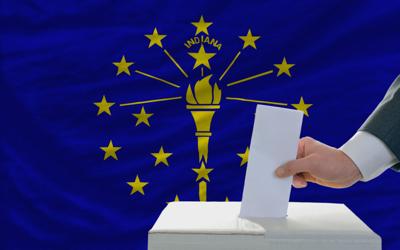 “Uncivil War: U.S. Elections Under Siege” screening on March 19, 7 p.m. at Indiana Landmarks, 1201 Central Ave., is followed by a discussion and reception.

Be informed,vote informed,” reads the promotional material. “Uncivil War unravels a web of threats to American elections, separates truth from fiction, and exposes a hidden war against democracy itself. Through conversations with experts, politicians, and activists fighting on both sides of the partisan divide, [Who Counts] examines our system of government and searches for a way to renew it.”

The Indiana premier of Uncivil War, a documentary film directed by Richmond, Indiana native Tom Glynn is hosted by the Indiana Coalition for Independent Redistricting. Julia Vaughn of Common Cause Indiana and Debbie Asberry of the League of Women Voters of Indiana are leading the discussion.

“It’s important that Hoosiers understand how voter suppression is happening here in Indiana with partisan gerrymandering,” said Julia Vaughn, during a telephone interview on March 3. “The film is entertaining while being hard hitting about how people are repressed. “

The program aims to educate Hoosiers about what their power can be as individuals and as members of a community whose interests are not served by the way voter districts are being drawn by a party in power, explained Vaughn. “There is a noticeable groundswell nationwide for just and fair voter districts, but not in Indiana,” cited Vaughn. “The Indiana Coalition for Independent Redistricting is determined to create citizen participation for the 2021 map of voter districts to represent the interests and needs of all residents.”

Vaughn explains how voters have their voices suppressed by cutting them out of a cohesive community and placing them in a voting district where they always are a minority opinion about what matters most to them, be it funding for public education, arts and culture, or protecting natural habitats, or equitable housing options.

“In order to protect the institution [democracy] voters have to be the map makers,” said Vaughn. She points out how, for decades, communities adversely have been impacted by suppression of the best interests of people who care about issues in a way different from the majority whose priorities always are uppermost in the way office holders govern.

“We can’t leave it up to the Indiana legislature to draw fair and just districts, she said. “We have lacked leadership in the Indiana General Assembly to govern with all points of view in mind, Voters have to be the electoral mapmakers.”

The Coalition has created a way for every voter to have input that is in the public interest, not in the self-interest of legislators who protect themselves to be re-elected, not allowing another point of view to be represented.

“We want everyone to have a chance to draw a map for where they live, how they want to live,” said Vaughn. The Coalition intends to place the citizen drawn maps in front of the officeholders to show them what all, not just some, of the people deem essential for how they want to be governed. The Coalition has created a public process focused on competition for representing a community or a neighborhood, said Vaughn, pointing to why now even within a party diverse voices are suppressed in favor of continuously keeping one person in office.

Attendees to the program can learn how to access a computer program to draw a voter map that allows multiple concerns and ideas to “rise to the top.” The voters should be the power brokers, said Vaughn, pointing to the necessity for everyone to step up as “we the people.”

One good thing has been happening over the past decade as awareness has surfaced about how the system has been rigged, said Vaughn. She perceives a willingness for voters to make their voices heard, and “for their voter plan to be put on the table.” From the response to the Coalition outreach, Vaughn perceives minority voices no longer are content to be suppressed.

“Show up, speak up” for your vote to count.”

All 50 states are redrawing their congressional and state legislative maps within the coming year. “Our actions between now and then will determine whether those districts are fair and representative... or whether politicians can gerrymander to pick and choose which people they represent. The time is long past overdue to END politicians’ ability to gerrymander,” reads the news release.

If you want more information about the March 19 program, or can’t attend but want to put forward your map contact jvaughn@commoncause.org