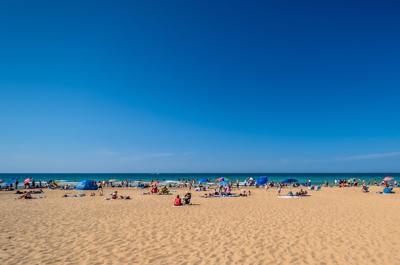 Practically lost amidst the onslaught of COVID-19 last week was a landmark victory for the people of Indiana and their right to enjoy the Lake Michigan shoreline.  When you say the words out loud, House Enrolled Act 1385 sounds pretty anonymous.  Like an empty suit hanging on a rack in a department store closed until further notice.  But this legislation is a big deal.  It promises to finally put a stop to repeated efforts to privatize one of our state’s most valuable natural resources.

It was clear going into this legislative session that bills were in the works intended to subvert the Indiana Supreme Court’s 2018 Gunderson v. State ruling that the shoreline of Lake Michigan up to the natural ordinary high water mark has been state property since Indiana’s founding.

That ruling followed a series of legal challenges by the Gunderson family in Long Beach. The Gundersons were beachfront property owners who claimed their land extended all the way to the water’s edge.  When, during the course of their unsuccessful appeals, the Gundersons sold their property and left Long Beach, their cause was taken up by deep-pocketed proxies who eventually tried (and failed) to have the case heard by the U.S. Supreme Court.

Though besieged by rising lake levels and what appear to be climate change-induced storms, Indiana’s Lake Michigan shoreline is still a beautiful place — so much so that some have called it Chicago’s Maibu, or even Chicago’s Riviera.  No wonder then so many people of means, especially Chicagoans, have wanted to claim it for their own.

On the flip side, many native Hoosiers, especially those from central and southern parts of the state, have rarely if ever visited their lakeshore.  That’s why it was so important Carmel’s Jerry Torr, Chair of the House Judiciary Committee, took the time to visit Long Beach and see what was at stake for himself.

Time and again since the state’s Supreme Court ruling, bills aimed at limiting the ways people have used our beaches to renew and recreate have been floated in the legislature.  But grassroots efforts by citizen activists like the Long Beach Community Alliance and Save the Dunes got legislators’ attention by repeatedly rallying write-in and call-in campaigns.  Reaching out, it seems, can actually work.

House Bill 1385 was approved resoundingly: 78-15 in the House and 36-13 in the Senate.  If private property is close to sacrosanct in Indiana, this legislation demonstrates that our history and traditions also count. This codifies the Supreme Court’s Gunderson ruling, affirming the public’s right to access the shoreline for any recreational purpose for which Lake Michigan is ordinarily used — and that beachfront property owners are not entitled to claim the beach or the water as their private property.

The bill is now on Gov. Eric Holcomb’s desk.  Given the overwhelming support it received in both houses, he should sign it before this month is through.  By doing so he will close a long, fraught but ultimately gratifying chapter in favor of the public trust in Indiana.