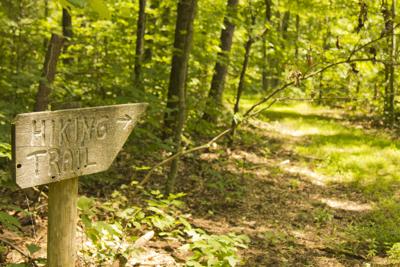 A new caucus has been created to continue the momentum started in 2018 by Gov. Eric Holcomb’s Next Level Trails Program when the administration set aside $90 million for the development of hiking trails across the state.

The Indiana Legislative Trails Caucus was announced at a press event Thursday and is a bipartisan initiative that will continue efforts in the General Assembly to help grow, connect and maintain Indiana’s network of trails and greenways. Among the co-chairs include Rep. Carey Hamilton, D-Indianapolis, working with Rep. Anthony Cook, R-Cicero, Sen. Eddie Melton, D-Gary, and Sen. Dennis Kruse, R-Auburn.

Indiana Greenways Foundation President Mitch Barloga said the new caucus will help to develop trails throughout Indiana as his nonprofit organization works with lawmakers and the Rails-To-Trails Conservatory (RTC). He said the Indiana Department of Natural Resources has been working expeditiously over the last 15 years on trail development to continue to grow and repair trails.

As more trails for walking, hiking and biking are developed, Barloga said he hopes to see children bicycle and walk to school more and cars being used less often.

“These are seriously life and death situations,” he said. “People are dying from obesity because we can’t get around and we don’t have places to go and trails offer that opportunity.”

Barloga noted that 73% of Americans feel they have no choice but to drive as much as they do and 57% would like to spend less time in a car. He said if we had more trails, we could walk or bicycle safely to our places of work, for shopping or school.

Hamilton shared her experience when, as a child, she first fell in love with the outdoors while hiking with friends at McCormick’s Creek State Park. Later during college summers, she became a runner after being inspired by a 60-year-old school teacher who starting running at age 50.

Hamilton also quit her first job out of college to hike the Appalachian Trails from Georgia to Maine. She said it was a life-changing experience made possible by a simple path through the woods. She said she has seen firsthand the significant economic impact of trails and has personally benefited both mentally and physically

Bryan Housh, Midwest policy manager for RTC, works directly with Barloga and the legislative chairs on the caucus. Housh talked about the Great American Rail Trail, which is a separate, protected trail that starts in Washington D.C. and ends in Washington state. The initiative, that is currently 52% finished, will traverse the state and connect Indiana with the Ohio Trails System, as well as Illinois, Iowa and many other states across the nation.

“When we first started this vision, we compared it to the interstate system and the idea that it creates a spine across the nation that allows other roadways to get people to smaller towns and places they want to go,” he said.

The spine they are building with this trail will connect every district in Indiana in the same way.

Housh also said that although there are many successful caucuses in the Midwest, one of the things Indiana is leading with right out of the gate is having two co-chairs in each chamber.

The Indiana Legislative Trails Caucus plans to meet in August to further discuss their plans for next year’s legislative session.

Haley Carney is a reporter for TheStatehouseFile.com, a news website powered by Franklin College journalism students.