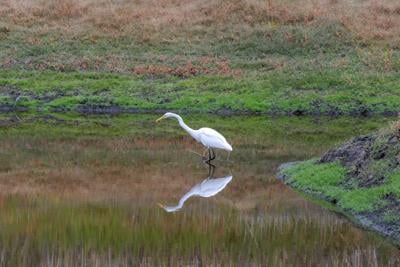 Current law doesn’t prohibit reconstruction but it does require projects for repairing open ditches or field tiles in rural, urban or suburban areas to go through a permit process to preserve as much wetlands as possible. It passed the Senate by a 32-17 vote with one person excused, and it sailed through the House 55-29, with 16 excused from voting.

Indra Frank, water and environmental health director of the Hoosier Environmental Council, said the legislation, if it becomes law, could damage and possibly destroy wetlands by exempting drain reconstruction from wetland regulations.

The bill is problematic because it opens a broad exemption that will hurt remaining wetlands, contains a key provision which is undefined, creates regulatory confusion with federal wetlands and will force the Army Corps of Engineers to become involved, she said.

Frank also said Hoosiers should be concerned because only 15% of Indiana’s original wetlands from the 1800s remain.
“Wetlands purify water, absorb storm water which reduces flooding and are essential habitat for many species,” she said.

Spartz defended her bill saying it offered clarity to the proper and long-standing framework under home rule for local governments. She said she is not sure why the HEC is pushing so hard for a veto, but she was worked with experienced professionals on this issue, including county surveyors, the Association of Counties and the Indiana Farm Bureau.

“This bill will eliminate unnecessary taxpayers spending and allow surveyors to fix broken tiles without newly created and costly delays from IDEM,” she said. “We have to remember that one of the primary functions of the government is to protect private property rights.”

But Rep. Carey Hamilton, D-Indianapolis, said the legislation will undermine the limited protections for the small amount of wetlands that exist in Indiana today.

“If I lived downstream of a project exempted [from these protections] storm water could easily come onto my property damaging my home and business,” she said. “This bill is economically and environmentally short-sighted.”

Hamilton also said the bill caused confusion in the final days of legislative session over how it would be implemented and could lead to more litigation in the future.

“Again, the bill is very short-sighted,” she said. “It does open up wetlands for destruction and in Indiana today where we have so few left and so much more rain than before, we’re really setting ourselves up for more downstream destruction.”

Hamilton said she hopes Holcomb vetoes the bill instead of signing it into law. SB 229 had not yet landed on the governor’s desk as of Tuesday afternoon.

Haley Carney is a  reporter for TheStatehouseFile.com, a news website powered by Franklin College journalism students.