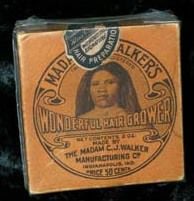 "Madam C. J. Walker, the first American woman of any race to become a millionaire by her own earnings," inspired Jon Keller, of  Ancestry.com PR firm, SAE • Zeno Group to reach out via email to pitch "a timely story idea in advance of the series premiere of the new Netflix original show, Self-Made, on March 20, which I'm sure many of your readers will be tuning in to."

Keller added, "Ancestry recently uncovered real-life records about Madam C.J. Walker's story from rags to riches." He offered an interview with an Ancestry researcher. I sent Keller a list of topics, and then I looked up ancestry's connections with Madam C.J. Walker.

The first post by Juliana Szucs , on March 3, 2015, followed a standard summation of Madam Walker biography, and was attributed to an earlier post in Website, Women in History

An Ancestry post on February 17, 2017, went a bit further with analysis, including this: "Though there is some debate on whether her fortune was worth $1 million when she died in 1919 at age 51, there was no question about her success, her mansion in New York, and her philanthropy. She supported anti-lynching campaigns, black colleges, and civil rights, while providing work for thousands of African American women. Madam Walker said she was not in business "for myself alone, but to do all the good I can for the uplift of my race,".

An Ancestry post about great-great-granddaughter A'Lelia Bundles features a video of Bundles in her research quest at the National Archives in Washington D.C., and directs a searcher to:

Where we further learn about the books, articles and speeches Bundles has shared over the past quarter of a century, and they connected with a December 23, 2017 post by Andre Kearns, on https://medium.com/@andrekearns/madam-c-j-walker-my-great-grandmother-d13a6e98792b, "Madam C. J. Walker and My Great-Grandmother," as a 150th birthday greeting to Madam Walker. Following an inspiring overview of his great grandmother's success story, is this: "I learned about my great grandmother's connection to Madam C. J. Walker while digging through a box of family documents my mother shipped to me a few years back. The box included a 1917 contract for Georgia Joyner to become a sales agent for Madam C.J. Walker in Suffolk, Virginia. The year 1917 was a particularly important time for Walker as she traveled throughout the south recruiting and organizing agents for her first annual convention of Walker beauty culturists held in Philadelphia. I wonder if my great grandmother attended this convention.

"Madam C. J. Walker served as an inspiration for women like my great grandmother, representing what was possible for strong black women with ambitions as entrepreneurs to achieve, despite the circumstances into which they were born. Both women also shared a commitment to education, understanding it to be the key to success for future generations of African Americans."

In closing, Kearns mentions meeting with A'Lelia Bundles "at a Harvard Alumni event on the future of education, hosted at the National Museum of African American History and Culture. Whenever we see each other, we enjoy sharing stories of family history. The evening — the museum, my conversation with A'Lelia, the panel discussion on education — left me completely filled with gratitude for the extraordinary lives our ancestors lived."

A post on https://www.wikitree.com/wiki/Breedlove-4, informs, "Madam C.J. Walker left her mark on history as an African-American businesswoman, entrepreneur and philanthropist whose beauty products empire led her to become the first self-made female millionaire (according to The Guinness Book of Records)" and closes with this now oft-quoted statement: "Don't sit down and wait for the opportunities to come; you have to get up and make them."

"Walker's reputation as an entrepreneur was matched only by her reputation for philanthrophy," encapsulates her biography posted on https://www.history.com/topics/black-history/madame-c-j-walker. "She established clubs for her employees, encouraging them to give back to their communities and rewarding them with bonuses when they did. At a time when jobs for black women were fairly limited, she promoted female talent, even stipulating in her company's charter that only a woman could serve as president. She donated generously to educational causes and black charities, funding scholarships for women at Tuskegee Institute and donating to the NAACP, the black YMCA, and dozens of other organizations that helped make black history…Her plans for her Indianapolis headquarters, the Walker Building, were carried out after her death and completed in 1927. Today, she is remembered as a pioneering black female entrepreneur who inspired many with her financial independence, business acumen and philanthropy."

"Every time I walk through the doors of Villa Lewaro -- the mansion my great-great-grandmother, Madam C. J. Walker, called her "dream of dreams" -- I always take a moment to imagine the ancestors and the magic they must have felt in these rooms," writes Bundles, adding while "she wanted a place to relax and garden and entertain her friends…She also wanted to make a statement. Villa Lewaro, she hoped, would inspire young African-Americans to "do big things" and to see 'what can be accomplished by thrift, industry and intelligent investment of money.'"

"Do not fail to mention that the Irvington home, after my death, will be left to some cause that will be beneficial to the race -- a sort of monument," she instructed her attorney, F. B. Ransom. As the largest contributor to the fund that saved Frederick Douglass's Anacostia home, Cedar Hill, she understood the importance of preservation as a way to claim and influence history's narrative.

"As one of the grandest and earliest mansions built and owned by an African-American and by an American woman entrepreneur, Villa Lewaro is one of the few remaining tangible symbols of the astonishing progress made by the first generation after Emancipation," emphasizes Bundles. "Without this evidence, our history is easily misinterpreted and dismissed. Without something to touch and see, our children and grandchildren have no way to verify the accomplishments of the ancestors."

Indianapolis has other legacy reminders, including artist Sonya Clark's massive portrait of Madam Walker constructed from combs, permanently installed at the Alexander Hotel; the Indiana History Center exhibit, You Are There 1915: Madam C. J. Walker, Empowering Women, open until January 2021; the IHS Library and Archives Madam Walker Collection, that forty years ago became an inspiration for scholars and ordinary citizens to pay attention to members of their own family who have done "big things" in their own time, on their own terms.

Maybe they aren't as towering as Madam Walker's, yet they are significant, and that's the point made by Jenn Utley, Director of Research at Ancestry, who wanted "to provide some added background into the life of Madam C.J. Walker before people watch Self Made on Netflix."

But we add a coda here, quoted from A'Lelia Bundles' sterling overview of the Indiana Historical Society Madam Walker Collection. At the close of her essay in Traces Magazine, Winter 2020, Bundles writes, "While it [Self Made on Netflix] is "inspired by" my book, On Her Own Ground, it is a fictionalized Hollywood version that veers wildly from the facts of Madam Walker's life and distorts key aspects of her business and personal relationship. Nevertheless, it is an opportunity for millions of viewers to hear her name, perhaps for the first time, and to want to visit the IHS to learn more about her."

The more than 40,000 items at IHS Archives and Library have been digitized and can be accessed at http://images.indianahistory.org/

Here's the March 18, 2020, email Q/A with Jenn Utley, Director of Research at Ancestry:

NUVO: What has led you to pursue this research regarding Madam C.J. Walker?

Jenn Utley: Madam C.J. Walker was a trailblazer in the business world, where she marketed and advertised her products in a completely new way by using her own face in before and after images. Usually advertisements for the African American community showed a white woman in the after images. Madam C.J. Walker was also a trailblazer, being an African American woman in the business world in the early 1900s to eventually become the first American woman to be a self-made millionaire. The real-life records, including the old advertisements and historical records about her, help round out that story and showcase how she revolutionized the beauty industry in the African American community.

NUVO: What do you believe are the essential impacts Madam C.J. Walker made upon Indianapolis during her relatively short sojourn here, and why has that impact continued to matter?

Jenn Utley: We can intuit that Madam C.J. Walker made a big impact as a business owner in Indianapolis. The local Indianapolis advertising campaigns found on Newspapers.com demonstrates the business she was able to drive locally, especially targeted to the African American community. Madam C.J. Walker would place her advertisements in independent African American newspapers and those advertisements were, in some cases, the only reason the newspapers stayed afloat.

We thought it would be of value to your readers and an interesting opportunity for people, especially in Indianapolis, to see some of the records that go along with the true story of Madam C.J. Walker that inspired Netflix's upcoming Self Made series.

At the height of The Madam C.J. Walker Company's success, it employed more than three thousand people, many of them included African American Indianapolis locals. In addition, in 1910, Madam C.J. Walker was unable to attract big-name investors so she invested $10,000 of her own money to create the Walker Manufacturing Company headquarters in Indianapolis.

NUVO: How should Madam C.J. Walker be viewed as a role model for young people now embarking on an entrepreneurial lifeway?

Jenn Utley: Madam C.J. Walker was doing things that had never been done before in the advertising world. She was a trailblazer in so many ways, including tackling the need for African American hair products, featuring herself in advertisements with "before and after shots," and using product packaging to showcase the benefits of her products.

NUVO: What do you hope will happen as a result of increased interest in the contributions of Madam C.J. Walker?

Jenn Utley: The real-life records, including the old advertisements and historical records help showcase how she revolutionized the beauty industry in the African American community. We hope this gives viewers a deeper understanding of her impact, as well as build up excitement, before watching Self Made on Netflix.