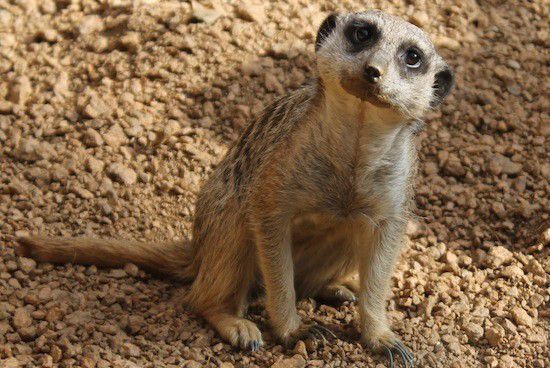 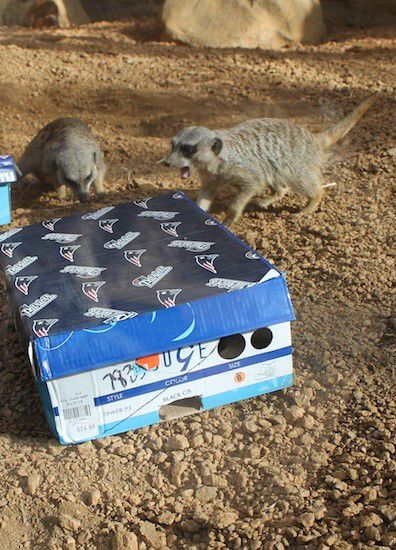 Meerkats make cogent arguments for their respective teams before heading to the ballot boxes.

Meerkats make cogent arguments for their respective teams before heading to the ballot boxes.

It's the question on everyone's minds: What will be the outcome of this weekend's big game at Indianapolis's Lucas Oil Stadium, Super Bowl XLVI, featuring the New England Patriots and the New York Giants? We consulted a some key sources — oddskeepers in Vegas, a local numerologist, the field of color psychology, and five meerkats at the Indianapolis Zoo — for guidance.

Studies have shown that color — specifically, the color red — can have a big influence on the outcome of an athletic contest. Why? We don't know. Something to do with rhesus macaques, male stickleback fish, optical illusions, Crips and Bloods, testosterone levels, and general pissiness. What we do know is there's actual documented proof of this claim.

Exhibit A: Since 1947, English football clubs wearing red shirts have been champions more often than expected, based on the proportion of clubs playing in red.

Exhibit B: During the 2004 Olympic Games, when competitors in boxing, taekwondo, freestyle wrestling, and Graeco-Roman wrestling were randomly assigned red and blue uniforms, the athletes in red won 55 percent of the time. Moreover, wearing red appeared to tip the balance between winning and losing in close matches. In contrast, when competitors in Olympic judo events were randomly issued blue or white uniforms, researchers detected no winning bias due to color.

All this would be extremely relevant if either the New England Patriots or the New York Giants were to wear a red jersey for the big game. In actuality, the Patriots' jerseys will be blue and the Giants' will be white, just as they were the last time these teams met in the Super Bowl. However, New York's jerseys will have big red numbers. So we'll call it for them.

Longtime local numerologist Jacquelyn Grady readily concedes that she does not typically use numerology — the study of the energy, significance, and symbolism of numbers and how they can relate directly to one's life — to predict the outcome of any competitive sports game. In fact, using numerology, which Grady calls, "sensible, not psychic," in this way was particularly difficult because the comparable numbers on each team kept canceling each other out. Nonetheless, she gamely attempted to build a numerology chart to determine the outcome of Sunday's big event (although she freely admits wouldn't want anyone to place a bet based on her prediction).

A typical numerology chart is based on an individual’s date of birth and the name given at birth. Because there was no clear date of inception for both teams to equate to a birth date, she instead used the birthdates of the starting quarterbacks, the birthdates of each of the two coaches, and the date of the first game of this season.

Using these six dates, Grady determined the personal year numbers, personal month numbers, and personal day numbers for the QBs, coaches, and teams. She then calculated who had a better number for a positive outcome. Her pick: the New England Patriots, by one point.

In odds we trust

Vegas oddsmakers — the guys behind the betting lines at every major sports book in the greater Sin City metropolitan area — are the obvious go-to guys when it comes to forecasting the outcome of any major sporting event, and the Super Bowl is no exception.

Beyond that, such factors as the playing surface (a draw, since both teams play on the same synthetic turf found at Lucas Oil Stadium); home-field advantage (technically a draw, since neither team is the home team, but we'll call it for the Giants since every self-respecting citizen of the great city of Indianapolis loathes the Patriots; and plus, the Giants quarterback is our quarterback's little brother); and the weather forecast (moot, as the game will be played indoors) come into play.

Finally, oddsmakers consider injuries, especially of star players; team morale; and even events in the personal lives of the players. All this is to say that if Giants quarterback Eli Manning has a hangnail, or if Pats quarterback Tom Brady's wife, supermodel Gisele Bundchen, suffers from a general malaise, you can be sure the oddsmakers have factored that in.

The current line in Vegas has the New England Patriots winning by three points. That being said, these were the same guys who thought the Pats would defeat the Giants in Super Bowl XLII back in 2008—and were wrong. (Incidentally, that was the year Nevada casinos lost the most money ever on the Super Bowl.)

Animals can do more than just predict earthquakes; some can also predict the outcome of sporting events. Like Paul, the German octopus who, during the 2010 FIFA World Cup, correctly predicted the winner of all eight matches played by his nation's soccer squad, including the final. Or Princess, the camel in New Jersey who, according to the Associated Press, has correctly picked the winner of five of the last six Super Bowls. ("Her only miscue in the big game," notes the AP, "was picking the Indianapolis Colts over the New Orleans Saints two years ago, indicating that even camels know it's generally risky to go against Peyton Manning.") Having since gone suckers up, Paul is no longer available for consultations on such matters; Princess's pick for Super Bowl XLVI, however, is the New York Giants.

Not to be outdone, keepers at the Indianapolis Zoo have enlisted the help of a few sagacious species to make their own predictions. To set the early line, zoo staffers placed two boxes brimming with crickets and worms in the meerkat exhibit, one box marked with the Patriots logo and the other festooned with that of the Giants.

If the meerkat's subsequent behavior is any indication, four out of five meerkats agree: The New England Patriots will win Super Bowl XLVI. (Note that the zoo's line is subject to change, as other animals, including dolphins, elephants, tigers, and stingrays, will be making their own picks in the coming days. The meerkats will also take a second shot at a pick. For info about dates and times, contact the zoo.)