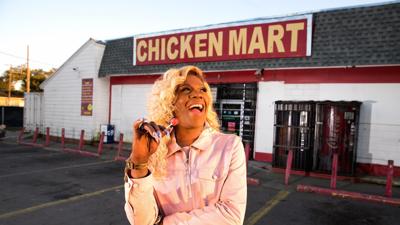 When Big Freedia performs a show, there’s one primary goal in mind.

“I just want people to have a great time and a great Freedia experience,” says the New Orleans native. “[I want them to] live their best life and be free for the moment. I just want to lift and lighten up people’s lives.”

SETH JOHNSON: I know you opened for LCD Soundsystem on a tour of theirs a few years back. As a big LCD fan myself, I’m curious to hear more about what that experience was like.

BIG FREEDIA: It was an amazing experience to become family with them. It was shocking for a lot of people who were their fans. They didn’t know what to expect, which was the fun part about it. But they were fans of mine. They had a list of people that they could’ve chosen from to go on tour with, and they chose me. I was just very grateful and humbled by that.

We had an awesome time. We connected. We became a little family.

JOHNSON: Going way back in the time machine now, can you tell me what it was about bounce music that you were originally drawn to?

BIG FREEDIA: The sound and everybody [being] all excited about it. Just the whole feeling of going to a block party or a high school or middle school dance and really getting into the music. Just how amped it would have the audience and the crowd.

JOHNSON: Is there a particular place or moment in time that you affiliate with bounce music?

BIG FREEDIA: All of the DJ Jubilee performances would just have me super excited to see him and his guys cut up. They would be rapping all over New Orleans. It was just amazing to see this straight male and all of his team performing on another level with routines and stuff.

JOHNSON: As someone who’s been in the business for a long time, would you say that queer artists are represented better now than they were back when you started your career? How has queer artist representation improved over the years?

BIG FREEDIA: It definitely has grown over time. A lot of times were just local. So for me, it has grown to a more national level. I’ve gotten a lot more exposure, and people are more accepting now. Queer visibility is just much more out there now in music TV, and film.

But there’s still so much more improvement that needs to happen with people educating themselves of the culture and really understanding the culture of the LGBTQ community and the support system that we need in order to keep on pushing. A lot of times, the younger queer individuals need a great support system. So there are still a lot of things that need to grow over time.

JOHNSON: You collaborated with Lizzo on the song “Karaoke” last year. Lizzo is known for her message of self love, which ties into my previous question a bit. What did you enjoy about working with Lizzo, and what about her message do you particularly admire?

BIG FREEDIA: It was amazing working with Lizzo. Lizzo is a friend of mine, and it was a great time doing the project together. Lizzo is a sweet individual, and I love her message and what she stands for. I stand by a lot of that as well, so we’re kind of in the same realm with what we stand for and using our platform for people who want to use their voice but don’t have a platform to speak on. We represent a lot of those people.

JOHNSON: It wasn’t until rather recently that you released music under a major label. From your experience, what are the pros and cons of major labels versus independent labels?

BIG FREEDIA: A major label just has more resources and more people on the team to get things done. Financially, it takes a lot to  do a marketing project with music and the whole nine yards to get it out there.

So it’s definitely better in a sense, but you also have to wait for the right moment to put stuff out. [You have to] deal with all the stuff in the backfield that people don’t know about. Sometimes artists figure, “Why is my stuff still on the shelf?” Because things take time to get together.

So in this [major label] process, I’m learning you have to be a lot more patient, and you have to work hand-in-hand with the record label to make things happen. Versus…if I was still independent, I could just put stuff out at any given moment I chose. So now, I kind of have to ride the fence with my label and do things a little bit differently.

JOHNSON: You talked about wanting to increase queer visibility, as well as Lizzo’s message of self love and how it’s similar to yours. With all that being said, what do you hope attendees take away from a Big Freedia show?

With a new album out on Bloomington-based label Secretly Canadian, the Chicago indie-rock band discusses why the Midwest just feels like home.