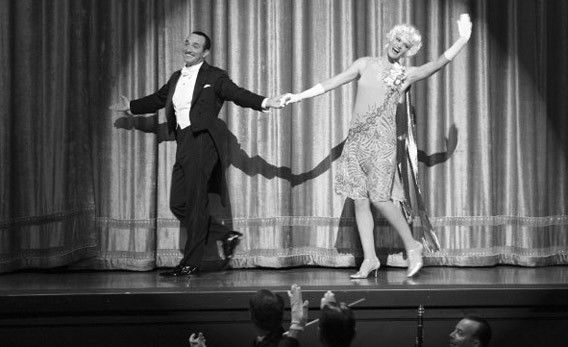 Jean Dujardin and Berenice Bejo in 'The Artist' 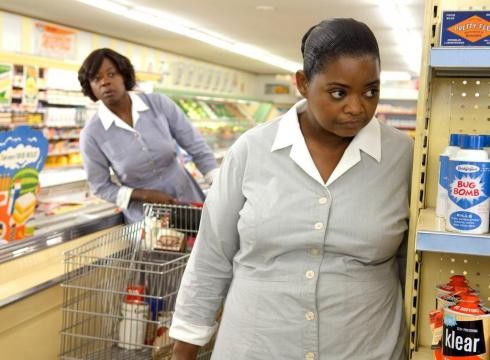 Viola Davis and Octavia Spencer in 'The Help'

Jean Dujardin and Berenice Bejo in 'The Artist'

Viola Davis and Octavia Spencer in 'The Help'

8:30 pm on ABC, following an hour and a half show titled Oscars Red Carpet Live (you'll have to fill me in on the red carpet

goings-on, as I am committed to doing absolutely anything other than listening

to insipid chatter and ogling evening gowns during that time frame).

Now about the actual awards show, let's hope somebody

technical awards section. A dig at another celebrity, a radical political or

genitals - I don't care, just give me something stimulating!

With that, let's take a gander at the major awards.

The Tree of Life

and Incredibly Close (too manipulative and gloppy), Midnight in Paris (too insouciant), Hugo (too stiff) and War

Horse (too many Disney-esque moments mixed with

the harrowing war story). The Help

will win acting awards, but the film's sitcommy

sections and "white girl saves the day" premise put off a number of people. The Tree of Life won't win - Academy

them up. Which brings us to Moneyball (very entertaining, but

so many statistics!), The Descendants

(excellent, but the morbid aspects may bum out some voters) and The Artist (charming and

richly entertaining, but you have to read it!). I'm opting for The Artist, partly because it's won most

every other major groups' awards, but mostly because

it transcends the gimmick factor.

Based on other recent major awards, this appears to be a

there is a contingent that considers his suave nature

to be smug, plus they're jealous because he's so good looking. Dujardin is a new face for Americans, but he won over

viewers with his portrayal of a self-absorbed, but extremely likable silent

Rooney Mara, The Girl with the

Michelle Williams, My Week with Marilyn

At first, Meryl Streep was considered a shoo-in for her portrayal

of Margaret Thatcher in The Iron Lady:

+ another knockout performance by the incredible Streep = big gold trophy. But

Thatcher, which opens the door to Viola Davis, who has done exceptional work in

television and film for years. Even better, a vote for Davis is a way to honor

the maids and nannies celebrated in The

Help without reinforcing its "whites to the rescue" premise.

Kenneth Branagh, My Week with

because Christopher Plummer is taking home the prize. A legendary actor and a

showy performance including a fatal illness - the man is a lock.

Melissa McCarthy was wonderful in Bridesmaids and BereniceBejo was radiant in The Artist, but Octavia Spencer was so real, so distinct in The Help, it's hard to imagine her not

Terrence Malick, The Tree of Life

After years of being annoyed by Terrence Malick's films, he

won me over completely with his ambitious, challenging, soul-searching The Tree of Life. A lot of people held

other opinions, though. The Descendants

was Alexander Payne's best work yet, and that's saying a lot. He could take the

prize, which would indicate a strong chance for an upset Best Picture win for his film. But much more likely is an Oscar for

win for The Artist, though J.C.

a doozy. Wouldn't it be a hoot, though, to see Annie Mumolo

and Kristen Wiig take the stage for Bridesmaids?

Will Win: The Artist

The Ides of March

Alexander Payne's screenplay for The Descendants was the

Should Win/Will Win: The Descendants

Haven't seen A Cat in

Paris or Chico and Rita, but how

surprising is it that Tin Tin and Pixar's Cars

2 were skipped? Of the three nominees I've seen, Rango will stomp all over Puss In Boots and Kung

Documentary, but the studios did not see fit to share all the nominees with the

press. I can tell you this much - as regards the Best Foreign Language Film,

the omission of Pedro Almodovar's The Skin I Live In is a crime. Pedro,