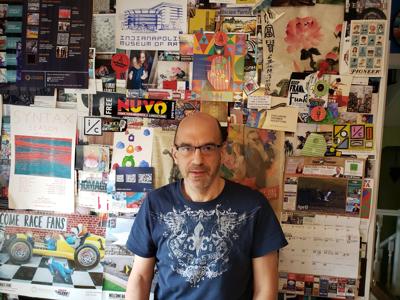 After 30 years as a trusted news source in Indianapolis, it was time to put NUVO to bed. Or so I thought.

Publisher Kevin McKinney had announced, on April 30, NUVO's imminent dissolution. Not long afterwards, the web platform TownNews offered NUVO a reduced-cost package that would make it possible for us to continue our coverage of  COVID-19, the George Floyd protests against police brutality, and whatever pops up next on the horizon. In response, McKinney changed his mind and hired me as managing editor.

After I recovered from the whiplash, I decided to write this brief history of my involvement with the publication.

While we're happy to have you as a reader, we hope you'll consider a membership.  We're also happy to have your feedback. If you have an idea about you think we should cover, or want to write for us, email me at dgrossman@nuvo.net. I’m looking forward to your ideas, pitches, and suggestions.

In November 2001, I wrote my first column —  my first NUVO piece ever —  about a body found in the lake at Lake Nora apartments. My (then) wife and I, who were residents of the northside apartment complex, were taking a walk when the police cars and ambulances arrived. The news crews followed. Residents watched from behind the yellow tape as the divers pulled the body out. The atmosphere was simultaneously sad and circuslike.

Before this story, I had published a lot of surreal poems in the Indy-based literary zine pLopLop. So it was fitting, I guess, that my first story in NUVO was so strange.

I started writing regularly for NUVO as a freelancer in early 2008. I frequented Indy’s First Friday gallery scene and wrote hundreds of visual art reviews over the span of 10 years. I also wrote art features. My first cover story was on Walter Lobyn Hamilton, who made (and still makes) dead-on mosaics of African American icons and pop heroes using broken vinyl records as his medium. The story did what it needed to do. Mostly. However, I should’ve spent a little more time interviewing Hamilton and a little less time interviewing all of his family members.

The editor at the time, Jim Poyser, told me as much. He also taught me that oftentimes the best way to end a story, rather than try to force an ending, is with a good quote. It was a good bit of advice, and it stuck with me.

I also learned that a car interior is a good place to record a phone interview. I interviewed the novelist Jhumpa Lahiri from my car, in the BP parking lot at 38th St. and Fall Creek Parkway, in 2012. It was also from my vehicle, in early February 2014, when I placed a call to the artist Robert Indiana. The interview was scheduled during my lunch break from my job at Goodwill. My car was the only quiet place available. The interview went well. This might have had something to do with the artist’s impression that I worked for The Indianapolis Star. I tried hard to disabuse him of that notion, but not too hard.

I never had to disabuse myself of the notion that Indianapolis is a city chock-full of high-end art collectors interested in local art. It isn’t. The closure of the Mark Ruschman Fine Art Gallery in 2009 proved that point. Ruschman, who is now chief fine arts curator for the Indiana State Museum, cited the 2008 financial crisis as one reason for closing shop in this interview with NUVO’s David Hoppe.

The gallery closure was seen as a loss by many in the arts community because of its support of local artists. But Ruschman doesn’t wax nostalgic. As he wrote recently (before COVID-19) in Pattern: “The model has changed. People say there are fewer places for showing art but those people are envisioning an older model. The truth is, there are more places showing art than ever before.”

I watched as the nonprofit Big Car Collaborative, then called Big Car Collective, emerged as a major exhibitor of visual art. (Their first gallery/studio was located in Fountain Square’s Murphy Art Center from 2005-2011.) But Big Car, now a much larger organization, has never just been about art for art’s sake. Their brand of social practice art has always emphasized engagement in the community. After their move to Tube Factory artspace in the Garfield Park neighborhood in 2015, this engagement accelerated. Currently, Big Car is providing affordable housing for artists.

Big Car isn’t the only nonprofit doing important work. The Indianapolis Art Center, the Harrison Center, the Arts Council of Indianapolis, and the Kheprw Institute are a few organizations that have also grown in importance over the past 10-15 years by sustaining not just an arts scene but an arts economy.

Journalism was undergoing a transformation on both the local and the national level during my time with NUVO. As social media rose in influence and market share and the internet grew more powerful, newspapers and newsrooms became smaller. As the new millennium wore on, publishers’ ad revenue shrank.

NUVO’s print edition also became smaller over time, and much of its advertising revenue evaporated. Not long after I landed my gig as NUVO arts editor in August 2017, the New York City-based The Village Voice —  the most prominent alt-weekly in the country —  ceased print publication. It has since gone out of business entirely. It wasn’t just alternative weeklies that were hurting, however. 1,800 papers have gone out of business in the US since 2004, including more than 60 dailies and 1,700 weeklies, according to USnewsdeserts.com. (The Columbia Journalism Review defines a news desert as “essentially an uncovered geographical area that has few or no news outlets and receives little coverage.”) The papers that remained often faced budget and staff cuts, or were hollowed out by hedge funds.

According to the Indiana Economic Digest, The Indianapolis Star newsroom is 75 percent smaller than it was 20 years ago.

“You should certainly subscribe to local media outlets and support them,” says Amanda Kingsbury, who worked as the Indy Star’s arts and entertainment editor until she was laid off in January, 2019.  “These reporters are working around the clock to provide real-time, verified, and accurate information, even as that information is changing rapidly. One of my former journalism colleagues said something very wise: ‘You are going to need local journalism, not only to tell you what's going on with COVID-19 now but also how our everyday lives begin to recover and change and how we relate to one another as individuals as a society.’"

(Kingsbury is now director of marketing and communications for the Arts Council of Indianapolis.)

As arts editor, I wanted to cover as many stories as possible, even if that meant working through my weekends. I worked through a lot of weekends. I think, in particular, of a cover story I wrote on artists and health insurance. I wanted our readers to sign up for Obamacare as Trump was actively trying to kill the program. The story involved six interviews, and took countless hours to write, edit, and fact check. These are the stories, I thought at the time, that people need more of. But like pornography, journalism is something that a majority of people aren’t willing to pay for anymore.

In November 2018, NUVO switched from weekly to biweekly print publication. At the same time, NUVO began to shift its approach to a more community-based journalism approach, following the example of the Dutch web-based publication De Correspondent. Basically, the idea was to take direction from our readership about where our stories should go. But it was hard, we found, to get readers to comment on the articles on the website, rather than on Facebook. Our goal was to convert readers to members, but our membership numbers fell far short of our goals.

NUVO ceased print publication in March, 2019 and went through a restructure. NUVO became a nonprofit, website-only publication. The three staff writers, music editor Seth Johnson, news editor Rob Burgess and I were able to hold on to our jobs for another three months. After our employment ended, Johnson and I continued to write for NUVO as freelancers. Right now, COVID-19 and the George Floyd protests are priorities in terms of coverage, and we need more of both.

Whether the issue at hand is COVID-19 or systemic racism, we need writers who will give us their unvarnished perspectives and let readers stand in their shoes. We need writers who consider inconvenient facts that challenge their own preconceptions.

As writers and readers, we need to build trust and find solutions together. If it's true that people have lost trust in journalism as an institution, then this is how we build it again.

You’ll soon see some changes to the NUVO website. Having access to the TownNews network of news sites will allow us to republish locally-relevant stories. We hope this partnership represents a new and economically sustainable paradigm in publishing. In any case, we’ll still have complete editorial independence. So, if we give you whiplash, we hope it’s in a good way.

Coronavirus Diary: A Stay-at-Home Order Protest at the Governor’s Mansion

You too can navigate a safe passage to healthcare

This is awesome Dan! Congratulations! Can't wait to see all the things you will do!