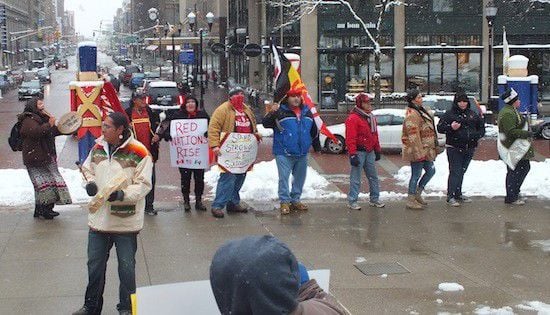 Protestors braved frigid temperatures during a traditional native Round Dance on the Circle. 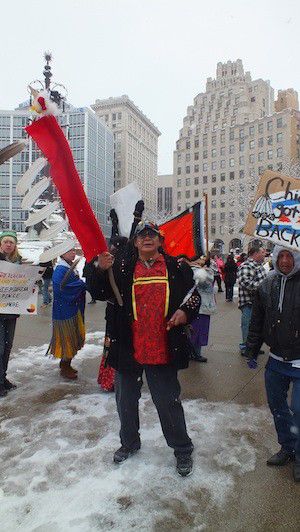 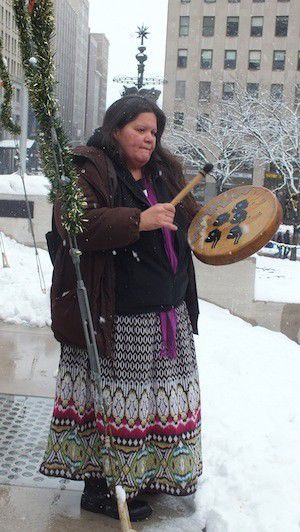 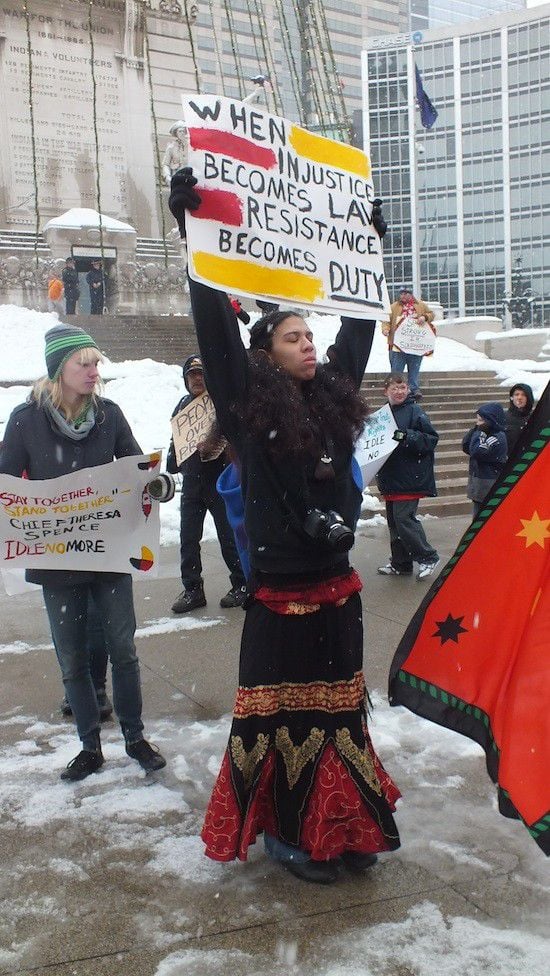 Protestors braved frigid temperatures during a traditional native Round Dance on the Circle.

Braving blowing snow and frigid temperatures on the final Saturday

in December, people came to Downtown Indy from as far away as Ohio, Minnesota,

Wisconsin, Montana and Canada to participate in Indiana's first Idle No More rally

and Round Dance flash mob.

The effort to stand for

environmental justice and against further erosion of native peoples' rights is

in solidarity with an ongoing grassroots First Nations campaign in Canada. Dismay over Canada's omnibus

sparked the movement. Opponents of the bill believe it will strip the First Nations people

A week later, many of the same people traveled

Plaza to the Consulate General of Canada.

producer of WBND International Radio from London, Ontario, a man of Ojibwe and Cherokee heritage who attended both rallies. "It's

experiencing rapid growth in Canada and the U.S. It

The budget bill at issue includes

unilateral changes to the Canadian

regarding reforms in land management

from the First Nations people.

reserve land and that it merely expedites the lease procedure, streamlining the

designation process by simplifying the referenda required to grant an interest

in reserve lands. A simple majority of meeting attendees is now the only

the support of a majority of eligible voters.

addition, the amended act would authorize Canada's Minister of Aboriginal Affairsto call a referendum to consider total forfeiture of a band's

territory. The minister could also ignore a resolution from the band council in

opposition to a decision at the meeting.

object to other provisions of the 400-page bill, as well, such as changes to

the Fisheries Act, the Navigable Waters Protection Act and the Environmental

Assessment Act that would remove protection of 99.9 percent of Canada's

Renee Kincaid, co-organizer of the Indianapolis rally and a woman

of Potawatomi, Miami and

Cherokee descent, said the bill has already removed thousands of lakes and streams

from the list of federally protected bodies of water in Canada. "On Dec. 4th, there were 2,500,000 protected lakes,

impact waterways not on the transportation minister's shortlist.

The government said its

goal is to maintain environmental protection, strengthen enforcement and reduce

overlap and regulatory uncertainty, which it maintains will permit safe

Reasons behind the rallies

Kincaid's goals in staging the protest that saw dozens of Native

Americans march from the Eiteljorg Museum to Monument Circle for a

peaceful rally include protecting land, water and mineral rights and getting

the government to honor treaties.

"I want [the Canadian government] to stop

Minister to meet with Chief Spence," she said.

First Nations Chief Theresa Spence became the face of Idle No More, a

Native American women outraged by the controversial government budget bill, when she began a hunger strike on Dec.

Vowing to die for her beliefs unless Canadian

Prime Minister Stephen Harper and a

indigenous peoples, she is currently living in a teepee on Victoria Island,

Ottawa, just outside the Parliament buildings.

Harper announced he would meet with First Nation leaders in Ottawa on Jan. 11. Spence intends to be at

the meeting. However, when pressed by protesters during the Chicago rally about

meeting with Spence, a spokesperson for the prime minister replied, "No

Citing caution due to historical precedent,

"I will continue my hunger strike and await

the outcomes of the meeting," she said in a news release. "Our

government with no true tangible results. We look forward to re-establishing

and strengthening our treaty relationship with Canada and the ongoing

discussions that lead to the recognition, implementation and advancement [of]

battle is not Spence's first with the prime minister. In early 2012 she

declared a state of emergency on her

of essential human services such as housing, water, sanitation and education.

seized control of the band's finances. Spence filed suit and won in court.

Her current hunger strike, emblematic of

indigenous oppression and resistance, is for all aboriginal communities, she

"I am here for my people, for our rights,"

Inspired by her strength,

Native Americans have expanded the campaign of public protest into the U.S.

to know America supports her," Pillow said during the Indy protest.

By standing beside her in

solidarity, the intertribal movement is achieving unity among all nations and

putting a stop to the bickering between tribes, said Chief Gordon Plain Bull,

one of the Indianapolis organizers and an enrolled member of the Fort Peck Assiniboine & Sioux Tribes.

Bull said he believes it's important to lend support to his Canadian neighbors.

"What's happening there could happen here,"

Dubbed the Round Dance Revolution because

thousands participate in traditional circle dances in public, the movement is

closed last week when large numbers of protesters showed up. Similarly, a blockade on the main rail line between Toronto and Montreal disrupted Via Rail

In response to the disruptive protests in

Canada, Kincaid emphasized the peaceful, legal nature of their protests in

Indiana. Pillow noted that other rallies are being planned in various Indiana

cities, across North America and even in Japan, as well. Additional details

about upcoming events in Indiana will be announced at a future date.

we don't stand up for them, we'll all fall," Kincaid said.

Just as it's grown geographically, the Idle No

More movement has expanded into a movement for political transformation beyond

its Canadian genesis. It's developed into a crusade for Indigenous sovereignty

and rights, seeking respect for Mother Earth and this land's first peoples.

"We want Indian people to be recognized,"

Kincaid said she believes the struggle is even

isn't just about Indian rights," she said. "It affects everyone

because it affects the environment and our natural resources."

Can we be better stewards of the earth and all of her sentient beings?