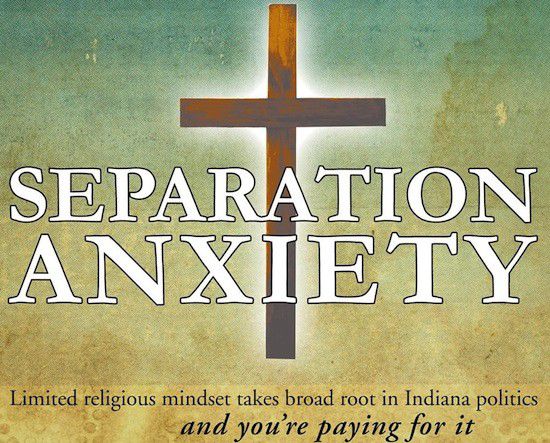 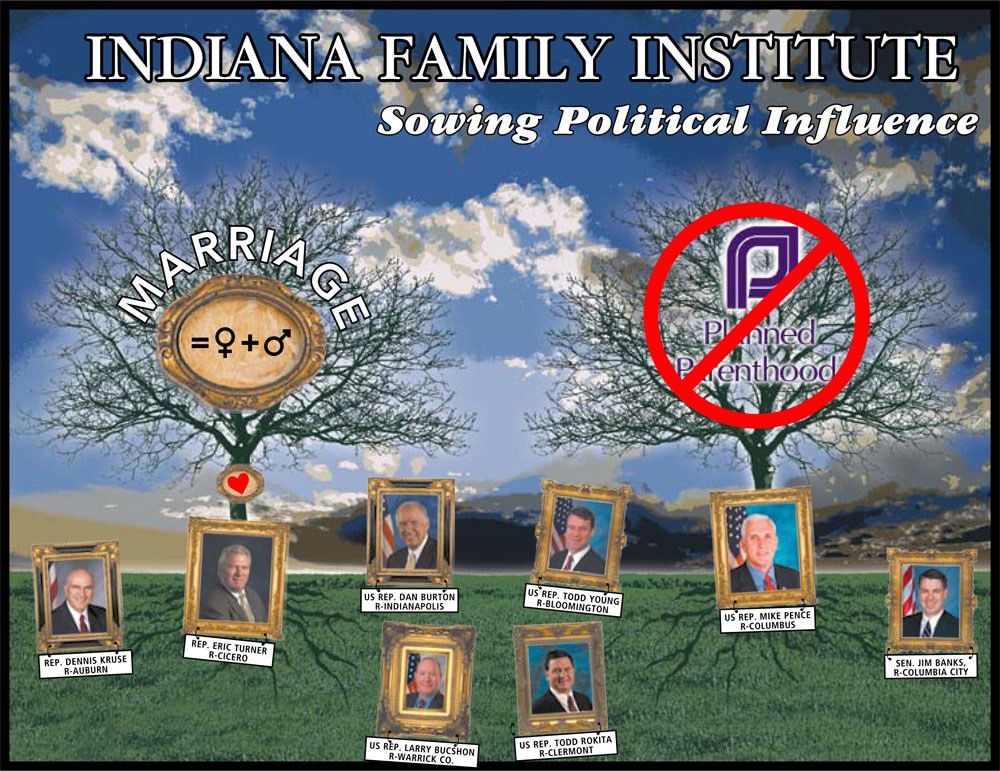 influence of evangelical Christian ideology on Indiana politics can be gauged

state's definition of marriage to heterosexual terms and defunding Planned

The Indiana Family Institute, described on

its website as "a 16-year-old non-partisan, public education and research

organization," supported both the aforementioned pieces of legislation. The

state supports IFI, as well, with a federal Medicaid waiver grant aimed at

it pitches itself as non-partisan, IFI's other core project involves running

meant to "inform citizens of

IFI website counts as a legislative victory passage of HJR 6, which seeks to

marriage as an institution between a man and a woman. And at a $75-per-plate

for signing the defunding of Planned Parenthood bill, which

in our state's history."

moralistic underpinnings as it engages in a $1.5 million collaboration with the

the face of multiple requests for information, the state has been unable to

produce any evidence that oversight and accountability measures are in place

and functioning. Multiple calls and emails to the Indiana Family Institute

The story that can

connection between IFI and Indiana politicians at the state and federal level,

was all over the media. As Indiana Right To Life's legislative

director, Swayze was the public face of the Planned Parenthood defunding

last year that Planned Parenthood's "corporate brand is the

face of abortion ... their mission," leveraging the well-known anti-abortion

meme that the women's healthcare provider pushed abortion to turn a

law bars public funds from paying for abortion, Swayze still maintained in that

that, in addition to her lobbyist roles, Swayze is a regular contributor to a

and a hetero-centric definition of marriage.

Swayze, it isn't her master's degree, being a former Indianapolis Chamber of

executive director that is most important in her work at IFI. According to her

IFI online bio, being "daughter of the Lord

" is her most important credential, which shapes how she "approaches

the political arena," which she calls the "mission field" for

for Swayze's — as well as the IFI's — public mission work are

issues, to be sure, are front and center for Swayze, but also relationship work

goal of the DCS project , according to the grant agreement is to "test new

strategies to strengthen the Child Support Enforcement program ...The primary

designed to serve 1,872 couples and parents in Marion County and about 200 more

in Hamilton County over a five-year period ending in 2013.

reports are to "detail the major activities and accomplishments of the

period covered ... the status of achievement of project goals and objectives,

data regarding the number and characteristics of participants recruited and

enrolled, and the number and characteristics of participants who have left the

program, including the reason(s) for leaving." Also, any experienced or

to the grant agreement, the state's evaluation activities may include "collecting

when such materials are requested, the state will not produce any evidence that

such information is being collected.

review and comment" on progress reports before releasing them to the

public. Research for this story began about a year ago and around that time an

was issued. No outcomes analysis was ever made available.

The state failed to

administrators to explain the relationship between the state and IFI.

such as John Covey's The 8 Habits of a

Successful Marriage. And it allows for incentives to referring

organizations and celebrations of successes.

DCS offered no accounting of these expenses. In fact, the only area for

zeroes. Only total scheduled payouts were listed, annual installments of

grant agreement also has a provision relating to the media. It says IFI will "cooperate

with DCS in utilizing the media to promote this project." The amendment

Yet DCS and IFI rebuffed numerous requests to discuss these goals.

No stranger to politics

While the flow of

public information remains clogged, the communication links between IFI and

state director and chief of staff for Sen.

Coats introduced a group of bills known as the Project for American Renewal,

which his website describes as "a comprehensive initiative aimed at

shifting power and funding from Washington directly to local, faith-based and

for a "capacity growing program"

Roll Call, the Capitol Hill newspaper, in the article,

of $500 each from Indiana Reps. Larry Bucshon, Dan Burton and Todd Young and a

, now running for governor, has appeared at IFI

fundraisers and operates in lockstep with its agenda to defund Planned

Parenthood based on erroneous claims that the women's health provider uses

federal funds to perform abortions. Mike Pence is a "founding

IFI has scores of

, R- Cicero, is a prime example. At IFI's annual

session, Turner authored both "the marriage amendment," HJR6, and the

representatives signed on as co-sponsors to HJR6. Fifty-two signed on for

the Senate side, Sen. Jim Banks, R-Columbia City, stepped up to sponsor both

Tomes, R-Wadesville, as a primary sponsor of HJR 6 last session. Kruse is

currently listed as an IFI advisor.

staff "absolutely are the driving force behind [HJR6] É they worked very,

during a phone interview last year. "They have had

a huge impact on LGBT issues in Indiana."

support gay-rights legislation throughout the country.Morris was president during passage of

must approve the amendment another time before it could be

added to a 2014 ballot. If the voters approve it, the amendment defining

declaring HJR6 a "featured victory" of the 2011 session, Smith posted

long-term plan to ignite an enduring cultural transformation. If pro-marriage

majorities in the Indiana General Assembly are retained in November 2012, and

talked about the far-reaching impact IFI has on anti-gay legislation, as well

as public opinion, in Indiana. "Of course they have had a huge impact on

addition to its role in launching the anti-gay marriage amendment, the IFI also

transgender (LGBT) persons, calling the effort "the brain-child of

IFI said in a Huffington

article that IFI was "lying" when it "claimed the

legislation would only protect the LGBT community. ... They're simply playing

to personal prejudices and bigotry as well as the fear of "the other.""

All in the family

IFI filed articles of incorporation in 1989. The group is a state affiliate of

Focus on the Family (FOF) and the Family Research Council (FRC), two of the

most well-known, well-organized and politically influential Christian groups in

hate group status by The

due to its anti-gay "hate-speech." The

Work to Normalize Sex with Boys

Perkins wrote in 2010: "While activists like to claim that pedophilia is a

disproportionate overlap between the two. ... It is a homosexual problem."

it did with Daniels, Pence and Clinton prosecutor Kenneth Starr, IFI bestowed

upon Perkins its "Friend of the Family" award.

in the Criterion quoted a Swayze

exceeded expenses by $2.1 million. In that same year, it received taxpayer

subsidies of almost $2.9 million, an estimated $1.8 million of which was

asked for a comment on this story, Jon Mills, director of communications and

marketing for Planned Parenthood of Indiana sent the following statement:

than 100,000 Hoosiers across the state, providing services such as life-saving

sexual health education and health counseling. Planned Parenthood is a

major provider of health care to underserved populations including those

most. At a time when health costs are skyrocketing and many families are struggling

to make ends meet, we should all be working to expand access to health care,

Swayze nor her boss, Curt Smith, offered the applied the same enthusiasm demonstrated

revenue in one category — that of marriage education training

—while deficits in other

its core activities of "providing education and events on issues impacting

is unclear whether IFI is accounting for the DCS money separately from its 990.

2010, the form said, Hoosier Commitment served 347 people. This is the most

detailed statement of accountability that extended research and open records

lobbying expenditures to influence public opinion at the grassroots level or

direct lobbying of a legislative body. But the spaces of the required schedule

are all blank. So no transparency of the lines between lobbyist, policy wonk

and social worker are apparent to the average citizen.

The state is not worried

bound by the full Code of Ethics. Contractors, such as grantees [IFI] are not

bound by the full Code of Ethics — only the donor restriction rule,

meaning they may not offer gifts to state employees."

are not allowed, but questions remain unanswered what sort of compensatory

wiggle room may be found in the unaudited, multi-year grant.

2010, officials added amendment No. 1 to the DCS grant agreement with IFI first

signed in 2008. The change allowed the state "to match federal child

for conflicts of interest? This question also remains unanswered.

of the DCS grant. But IFI has made no public accounting of these donations. The

contractual or financial relationship with the state that could raise a

question of conflict of interest or any appearance of impropriety."The packet then refers to the ethical

requirements "that apply to persons who have a business relationship with

the state" in addition to complying with all "state, federal and

utilization of federal grants are governed by many rules. IFI must abide by the

1964 Civil Rights Act, any funds from a grant must be kept in a separate

account and apart from any political activity and proselytizing. State civil

rights laws apply as well, along with the Americans With Disabilities Act and

other employment and beneficiary rights guarantees.

complaints about discrimination against LGBT

people would have no legal outlet for relief in Indiana. IFI and the Indiana

groups such as ACLU

and associated political action committees is difficult because smaller

organizations tend to occupy the same space and utilize the same employees.Furthermore, according to a

representative of the U.S. Department of Health and Human Services, officials

realize overlap is likely even though it's not technically allowed.

similar program to Hoosier Commitment run by the Iowa Family Policy Center, another

FRC affiliate, resulted in an Iowa ACLU investigation and

unanswered questions about the "beneficiary rights" of gay couples

education and counseling services — but also funded employee salaries and

utility expenses as the group fought against gay marriage on multiple fronts.

According to one University of Iowa

researcher who consulted on the grants, the center also refused to provide

of the School of Public and Environmental

of interest, "where a person makes a decision in his official capacity

that results in personal financial gain" are broadening as conflicts

the Founders to create our system of checks and balancesÉ Increasingly,

conflicts of interest are now conceptualized as a form of biased judgment.If — due to some particular

judgment or decision, the existence of that bias may constitute a conflict of

, a watchdog group that works to protect the constitutional wall

keeping religion out of politics and politics out of religion.

two decades of experience monitoring the religious right behind him, said the

a nationwide lobbying effort is afoot to advance IFI's particular, but by no

means universal, interpretation of Christian theology in the government sphere.

Boston notes that examples of taxpayers funding such groups are common.

this kind of relationship," between Christian conservative groups,

politics, and their receipt of federal funding "is par for the course,"

contributed to this report