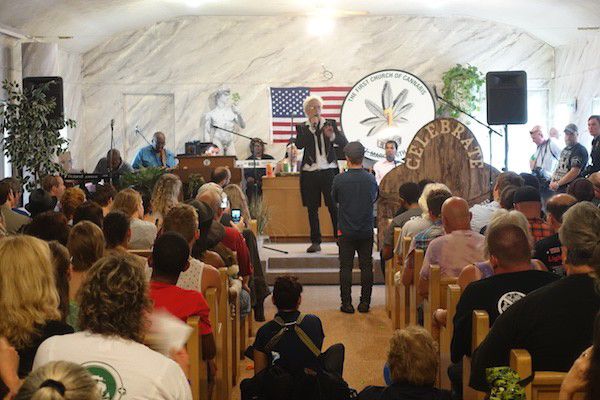 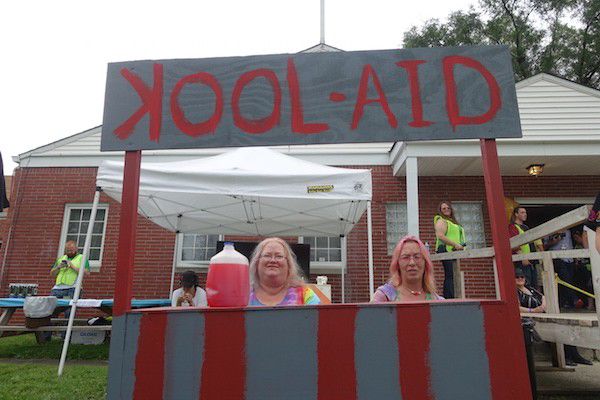 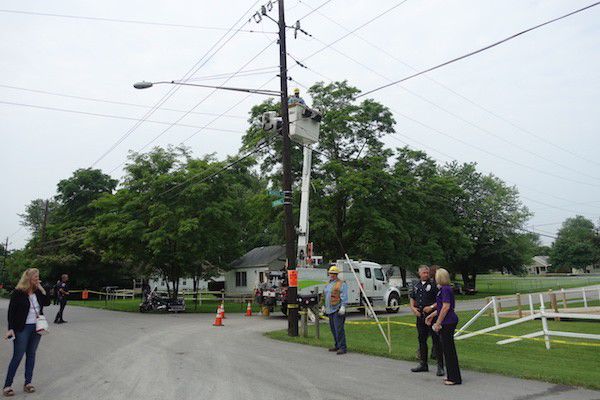 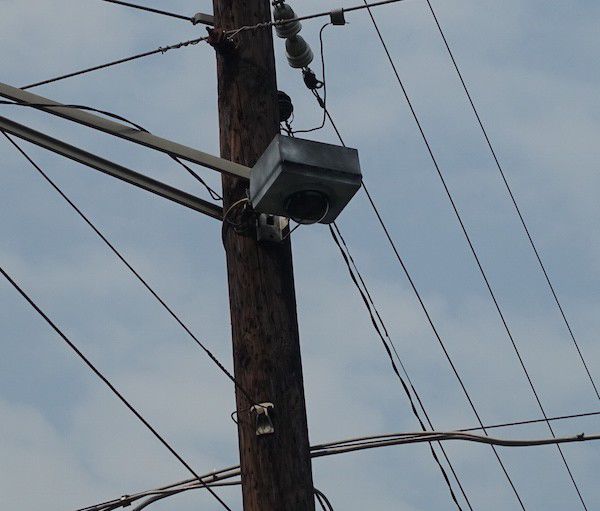 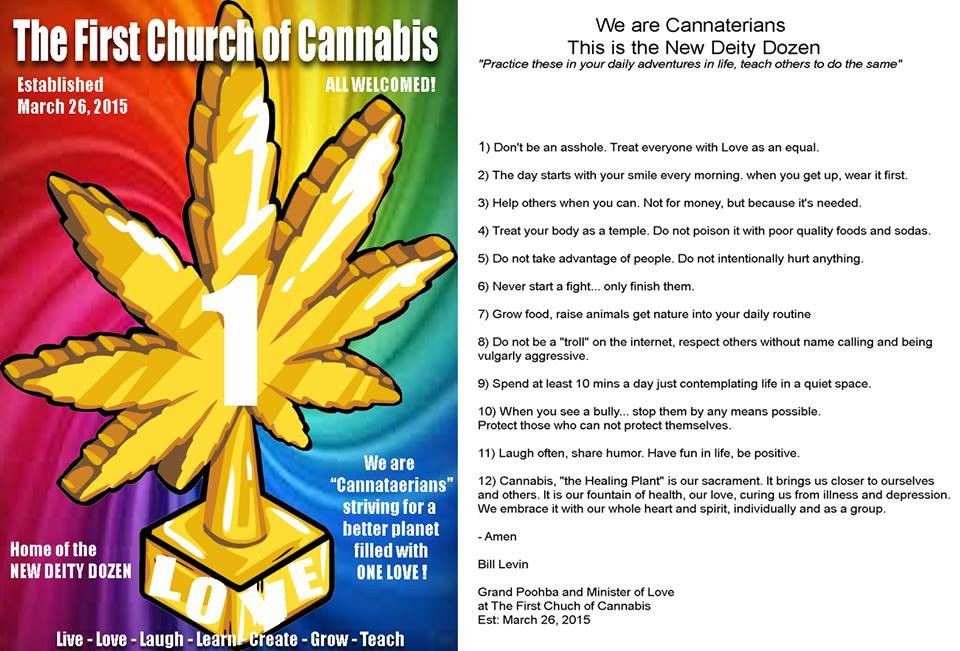 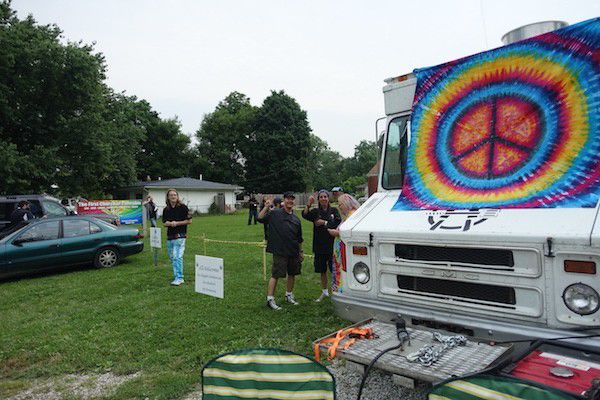 Charlie Doss stood outside his house on South Rural Street and watched the cops rumble by on their motorcycles.

“You’d think they were gettin’ ready for World War Three,” he muttered. The police presence in his neighborhood was making Charlie cranky.

Roughly two dozen patrol cars and a mobile IMPD unit sat at the ready in the parking lot of the Carpenters Local Union building two blocks from the First Church of Cannabis. Officers seemed to be everywhere; on foot, on bicycles — like so many other cities in America in recent years, Indy’s police department looked less like a group of peacekeeping constables and more like an occupying force.

IMPD was out in strength for the opening services of Bill Levin’s brainchild, the First Church of Cannabis, an “unintended consequence” of Indiana’s Religious Freedom Restoration law. After gaining tax-exempt status from the IRS, Bill had planned his inaugural ceremony for the day the law went into effect — July 1, 2015.

Bill had initially stated that his congregants would partake of their sacrament — weed — at the end of the service.

Marion County Prosecutor Terry Curry had responded to Bill’s intentions with a press conference. Curry expressed monumental frustration with the Indiana legislature, but made it clear IMPD would have all the plastic cuffs it needed: “Anyone caught in possession of marijuana will be subject to arrest … anyone caught giving marijuana to another individual will be subject to arrest for dealing.”

And further, as NUVO’s Amber Stearns reported on June 26:

Curry outlined all of the potential causes for arrest at the church service. Anyone attending the service, if marijuana is present, could be subject to arrest for probation violation or for visiting a common nuisance even if they choose not to partake in the church’s “sacrament.” Anyone who tries to drive away from the church while high is subject to arrest for operating under the influence. Any and all possible criminal code violations will be enforced. He also stressed that no minor child should be in the vicinity of the church.

Worried about a mass bust — including those who simply might’ve shown up to sing and not smoke — Levin prohibited weed at the church for the July 1 services.

As he told the Indy Star, Levin was horrified by the suggestion.

On the morning before Levin’s first service, NO PARKING signs popped up around the church. The media trickled in: all the local TV stations, radio, the Associated Press, Al Jazeera. Two representatives from the police-monitoring activist group Cop Block turned up to videotape the police and ask questions.

Roughly an hour before the scheduled start of the service, a service truck loaded with hard-hats and a cherry-picker began work on the utility pole that sat just across the street from the church’s front entrance. If there had been a problem in the neighborhood with, say, a transformer, the coincidence would’ve been suspicious. Some congregants speculated that the city planned on cutting power to the church. As the crew worked — rather quickly, it seemed — it soon became clear what they were doing.

A surveillance camera had been installed on the pole the very day the Church began its worship services.

The IMPD spokesman at the scene, Lt. Richard Riddle, said he knew nothing of a camera installation.

Levin Tweeted, "Love is knowing the city is mounting an IMPD security camera on a power line pole by the church.”

Church members stared up at the camera mounted on the pole. A few danced on the lawn.

Geri Twitty shook her head. Twitty, the tie-dye adorned founder of “High on the Hill,” Speedway’s “one-stop hippie shop,” was manning a Kool-Aid stand on the lawn in front of the church — a not-too-subtle dig at Chief Hite.

“I wonder if the cops want some of this,” Geri said. She wasn’t kidding. The patrolmen must’ve been thirsty in the midday heat.

Levin had set up a video screen behind the Kool-Aid stand to deliver his message to the folks who couldn’t make it inside — the sanctuary couldn’t have held more than a couple hundred souls. A fire marshall was on hand to enforce the building capacity code.

Outside the church, two food trucks lined the driveway. A portion of the church lawn had been tilled — the “Cannabiterians” intend to grow produce and distribute the food to the neighborhood free of charge.

Protestors from other denominations began to arrive outside the church. A bank of television and web-streaming cameras lined the rear wall of the sanctuary.

And just after noon, right on schedule, the service began.

The church’s “Minister of Music” — a man who identified himself as “D-Roq” — began by welcoming the crowd and introducing a performer named Carson Dearson. Dearson began a guitar/harmonica rendition of “Amazing Grace” that would’ve seemed completely at home in any country church, ending with a double-time tempo change that began a revival-style stomp.

The band kicked in after, and people stood and danced in the aisles. The eight-piece combo played a full set of songs with D-Roq interjecting between numbers: He was raised Pentecostal; yes, he believed in God, believed in Jesus.

And then, as he danced and played, he announced: “I’m 47 — cannabis is good for a brother!”

Forty minutes after the service began — a longer intro than even James Brown ever had — D-Roq introduced the founder of the First Church of Cannabis. With the crowd still on their feet, Bill Levin entered the back of his church, decked out in tails and holding his signature cigar. Bill walked up the aisle, hugging everyone he saw. When he reached the altar, Bill explained that the congregants, not the Rev, were going to speak: “It’s better than hearing a preacher for 45 minutes. That’s damn boring.”

Bill called out names, and one by one, churchgoers took to a platform on the right side of the stage. Bill explained that the podium was the opposite of the “sin box” that other churches had.

Longtime activist Steve Dillon urged political involvement. A man who identified himself as an ordained minister insisted that cannabis was a natural gift from the Lord.

Others, though, spoke with passion about the healing power of weed.

The testimony of one woman named Diane Richey was exceptional — she’d lived in pain for years; medical marijuana had offered her untold comfort. She’d seen specialists from Chicago to New York for a variety of conditions — and after 12 years, she told the crowd tearfully, she could walk without a cane. Others reminded the crowd about weed’s ability to ease chemo symptoms and the seizures suffered by kids with Dravet syndrome.

As the service progressed, it seemed fairly clear that Bill’s message was about love first, pot second. The self-proclaimed Grand Poobah might not have converted anyone that day, but Bill laid the groundwork for an argument that’ll soon be played out in the courts: Cannabiterians are religious practitioners, and their sacrament is weed.

“We BUILT this on LOVE,” Bill exhorted, and the crowd gave him a good, old-fashioned “Amen.”

“This may sound odd, but take out the Cannabis controversy and this is just like any other charismatic Church service.”

Levin’s been called a huckster, a mere pothead and a carnival barker. OK, granted — if Willy Wonka and Keith Richards could’ve somehow had a kid, it’d be Bill. He’s been a candidate, a raconteur, a promoter. But Bill’s a lot more than that. He’s an activist, and sure enough, it looks like he’s found enough like-minded souls to form a congregation that could last well beyond the media circus of day one.

After the celebrants had spoken, Bill asked the crowd for a call-and-response reading of the church commandments, the “Deity Dozen.”

Bill began with the first commandment: “Don't be an asshole. Treat everyone with Love as an equal.”

The crowd repeated it. There was a murmur. Nope, no one had ever heard the word “asshole” as part of a worship service before.

Bill smiled. “You don’t know how beautiful that sounded from up here.”

After the dozen had been read and repeated, Bill produced a box — it was the container intended to hold the sacrament.

“If we hadn’t been intimidated,” Bill explained.

Instead, the churchgoers lit various tobacco products — which explained why congregants were carded at the door. 21-and-over, please.

“Enjoy the fellowship!” Bill shouted, arms in the air. The crowd turned to one another, hugging, laughing.

As I left the church and started the long trek back to my car, a motorcycle cop caught my attention.

I stopped. I paused. “It was really, really nice.”

The cop allowed himself a slight smile. “Good,” he said. “Good.”