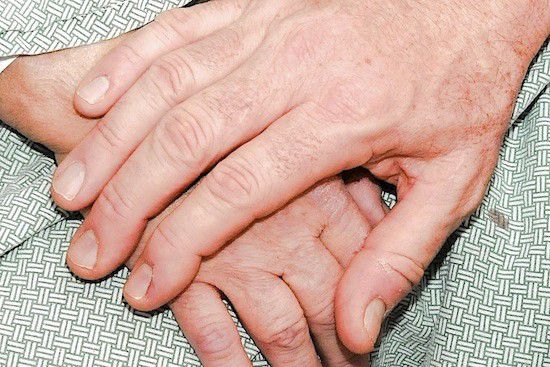 No One Dies Alone volunteers act as bedside companions. 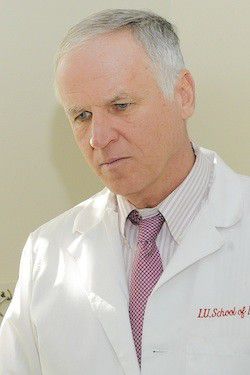 No One Dies Alone volunteers act as bedside companions.

sessions, Dr. Gregory Gramelspacher reads a poem by Jack Gilbert in which he wishes

where she was going."

Hospital called No One

. When enough volunteers are trained — perhaps as soon as

this month — people who die at Wishard will not die alone, even when

nurses are busy and family members are miles away.

people who are traveling alone; other times family members can't do it all:

They can't work, eat, sleep, and manage their families while keeping a bedside

vigil at the hospital. In either case, the No One Dies Alone program offers

relief for dying people as well as the families, friends, doctors, and nurses

who care for them.

The relief of suffering is a

basic goal of every doctor, yet it often competes with the need for painful

medical treatment. At the end of life, though, relief from suffering should be

paramount, Gramelspacher suggests. To hold a hand, offer ice chips, or tuck in

a blanket is to bring a "loving presence," he said, and those small

gestures can be profoundly meaningful at the end of life.

No One Dies Alone (NODA) was

the brainchild of a nurse in Eugene, Ore., who planned to sit with a patient so

he wouldn't die alone. But Sandra Clarke got

busy, and her patient did die alone.

Afterward, Clarke created NODA, and the program has spread from Eugene

Adam Campagna signed up for

Wishard's two-hour NODA training because "some force was saying, 'Get down

appreciates the requirement that volunteers show religious neutrality, and he

However, in addition to NODA training, volunteers must also complete a hospital

services volunteer orientation, which includes a tuberculosis vaccine, a

criminal-history check, and some e-learning. "When they come out on the

far end, they're ready to commit," Whitehead said. "If I get 10 more

volunteers, and their availability matches up, I can launch almost immediately."

Up to 24 volunteers per

vigil might be needed to work in three-hour shifts, either sitting solo or

paired with another volunteer, Whitehead suggested. Between vigils, volunteers

experiences and learn more about palliative care — which focuses on

relieving and preventing the suffering of patients.Many volunteers come to NODA because they were with loved

ones at the time of death. "I was in the room when my best friend died of

cancer," Whitehead said. "I was very humbled by the experience."

Gramelspacher often reads "By Small and Small: Midnight to 4 A.M."

the poem written by Gilbert. Mary Smith-Healy might discuss what volunteers can

expect at the end stage of life from a nurse's perspective, and Karen Estle

urges volunteers to "be honest, be yourself. Provide comfort. Hold a hand.

Wipe a brow. Don't put yourself in the position to think, 'I wish I would have

launched its No One Dies Alone program three years

ago, and it's been "an incredibly popular volunteer program," said

Eric Clabaugh, public information manager. The community is so aware of NODA,

Clabaugh said, that the local media recently publicized the fact that a

when no one else was available.

Volunteers are drawn to NODA

experience and more of a human experience," Gramelspacher said. "The

companion during a profoundly important and meaningful time."

the ratios that currently rule end-of-life care in the United States: "Eighty

percent of Americans say they want to be home at the time of death, surrounded

by friends and family. But 80 percent instead die in a hospital."

focus on providing patients with relief from the symptoms, pain and stress of a

serious illness. The No One Dies Alone program is part of Gramelspacher's

larger message about end-of-life care. If doctors were truly doing their jobs,

he said, fewer people would die in hospitals; instead they would discuss their

own last days well in advance. Their doctors would offer plans for end-of-life

care right at home. A patient would see his imminent death as "an

essentially human experience, not as a medical problem to be managed by doctors

and nurses in a hospital," Gramelspacher said.

because their doctors did not discuss end-of-life road maps, he suggests. Often

Gramelspacher thinks to himself: "If anyone had been practicing medicine,

he would have prevented this person from ever getting into the ICU."

Doctors must step up, provide end-of-life road maps, and honor their vow to

"Our focus is to return

death and dying to the community," he said, "to let more people die

at home surrounded by family and friends." Other countries, including

Canada, the United Kingdom, Australia, and New Zealand, are way ahead in this

effort. In those nations, 70 percent of hospitals with 300 or more beds have

with blazing the palliative trail in Indiana. The IU Simon Cancer Center on the

IUPUI campus doesn't yet have a palliative care program.

feel like I'm sticking my finger in a dike that's about to burst,"

Gramelspacher said, because families are clamoring for palliative care, but

hospitals have been slow to provide it. "There are some aspects to the end

of life that need expert attention by skilled health care providers, but

primarily death and dying is a human experience, not a medical program to be

solved with medicines or technology."

"We spend more on

world combined," Gramelspacher said, and he should know. He was team

care for people who die in American hospitals, but $500 million less —

$2.4 trillion — is spent annually on end-of-life care elsewhere on the

planet which Americans share with another 6.5 billion people. Those excessive

U.S. dollars often buy lonely and painful hospital deaths, the opposite of what

of the hospice movement in the United Kingdom, who said, "You matter to the

last moment of your life." Palliative care is "not so much about

death and dying as about life and living," Gramelspacher said. "It's not all doom and gloom. It's pushing the