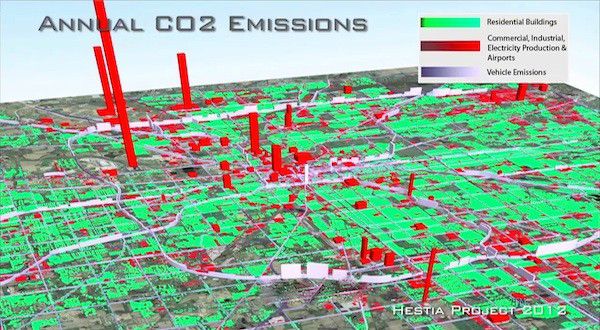 An example of how Hestia "envisions" carbon emissions. Image courtesy of Hestia. 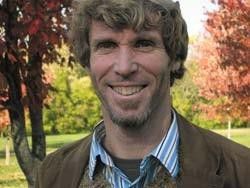 An example of how Hestia "envisions" carbon emissions. Image courtesy of Hestia.

A team of researchers led by Kevin Gurney, a professor and

researcher at Arizona State University, has recently developed a model that can

predict carbon emissions on the street level. This model, named "Hestia" after

the Greek goddess of the hearth, may prove essential in curbing and perhaps slowing

the effects of global warming.

One of the model's first publicized runs utilized Indianapolis,

providing the city with tangible emissions data while positioning Indianapolis

as a strong representative for carbon emissions modeling nationally.

carbon dioxide, the compound most responsible for global warming.

Carbon dioxide is one of many greenhouse gases. Other

common belief, carbon dioxide and other greenhouse gases are beneficial to

Earth, and, without them, human life would not exist. Greenhouse gases trap

gases, on average, Earth would be a chilling -0.67 degrees Fahrenheit, a temperature well below

dioxide traced to human activity, are released into the atmosphere, however,

concentrations and their effects on the atmosphere. One of the first, and

perhaps most famous, carbon dioxide stations in the United States is the Mauna

Loa Observatory in Hawaii. It has been tracking atmospheric carbon dioxide

concentrations since the late '50s.

Scientists have developed a number of computer-based models

to measure carbon dioxide emissions. Taking data from various points across a

region, researchers are able to project carbon dioxide emissions for a large

area, typically the county- or Census tract-level. These models have left much

to be desired. While these models can numerically predict carbon emissions on a

regional level, they fail to pinpoint the exact coordinates of carbon emitters

within a county. Instead of providing a precise location, they merely bunch all

carbon emitters into one geographic result. The county itself becomes the

buildings. "I think we are the first effort to do something at this scale. We

have taken a very different approach to solving this problem," Gurney

Hestia uses traffic reports, among other data, to predict

exact carbon emissions. The model can be modified for every part of the day and

week, outputting results every hour. This flexibility allows researchers to compare high traffic times of the

Gurney and his team chose Indianapolis for a number of

reasons. For one, the majority of Indianapolis fits snugly within the

boundaries of a single county. Furthermore, most of Indianapolis' carbon

dioxide emissions data is reported on the county level. Indianapolis also has

flat and symmetrical terrain, and the city's population is distributed fairly

equally in all directions from the city center. Perhaps most important,

Indianapolis is an "island" city, surrounded primarily by rural landscape.

Because it is surrounded by rural land, most of the city's pollution is from

the city itself and not from surrounding areas.

Using Indianapolis was also simply practical for Gurney and

his team. "I was at Purdue at the time [of the research]. Indianapolis being

physically proximal was helpful," Gurney explained. By being so close to the

team, Gurney could take regular trips to Indianapolis and talk with the city's environmental

staff. In addition, Indianapolis has an ideal terrain, which increases the

As expected, Indianapolis' major roads are the largest

source of automobile carbon emissions. While the city's major roads,

interstates and highways make up just 15 percent of Indianapolis' roadways,

they are responsible for 62 percent of the city's roadway carbon emissions.

Moderately busy roads, which account for about 10 percent of Indianapolis'

roads, are responsible for approximately 22 percent of the city's vehicular

carbon emissions. The remaining 75 percent of Indianapolis' roads, which are

used lightly, account for the rest of the city's roadway carbon emissions.

According to Hestia, the Harding Street Power Station, a

coal power plant on the Near Southside, and Indianapolis International Airport

are the largest individual sources of anthropogenic carbon emissions in the

city. Both of these emitters are located in Decatur Township, which,

coincidentally, emits more anthropogenic carbon than any other Marion County

Station particularly interesting. When asked if the power plant's carbon

footprint was surprising, Gurney responded, "I would say they were what we

expected. The power plant within the city limits is distinct, large and very

noticeable. It is not necessarily surprising, but it is still alarming." His

from the Commission for Environmental Cooperation, an early 2000 study, says

the power plant released more than 3.6 million pounds of carbon dioxide per

Still, city officials say they should not just focus on the

largest emitters in the city. "While some sources are highlighted as larger

emitting facilities, it is important to not lose sight of an important educational

message from this project. Everyone can play a part in reducing emissions

associated with energy and transportation," explained Matt Mosier of the

Indianapolis Office of Sustainability. While smaller emitters may not output as

much carbon dioxide as the Harding Street Power Station and Indianapolis

International Airport, together they release a substantial amount of air

Elsewhere, Hestia found that the majority of carbon

emissions from residential properties are emitted during

the evening hours. The majority of carbon emissions from businesses, on the

other hand, are emitted during the day. Seasonally, homes and businesses have a higher carbon

footprint during the winter months, due to increased energy usage for heating.

Gurney and his team have big plans for Hestia's future. They

plan to implement methane in their model, considering it is the second most

expressed interest in implementing Hestia. Still, Gurney and his team want to

do more with Indianapolis.

Other research groups have already taken note of Hestia and

recognize what it may bring to carbon mapping. "This is a visually compelling

view of carbon emissions, identified down to the individual building level,"

explained Gabriel Filippelli, a professor and biogeochemist at IUPUI. "Given

that no limits currently exist for carbon emissions, this model does a better

In the future, Gurney could see Hestia being used as a

officials can use it with ease on a day-to-day basis. City officials, such as Mosier, could

"[Already] the City has proactively led by example with

operations and in promoting alternatives to residents and businesses," Mosier

said. "The Hestia project is an easy to understand simulation of carbon dioxide

emissions from the Indianapolis community."