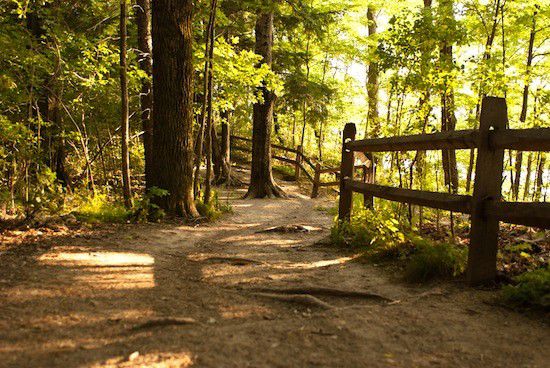 The Hoosier Mountain Bike Association would like to upgrade lesser-used trails on Eagle Creek's west side for mixed-used purposes — including bike traffic. Opponents counter that such an upgrade could carry detrimental consequences for park wildlife. 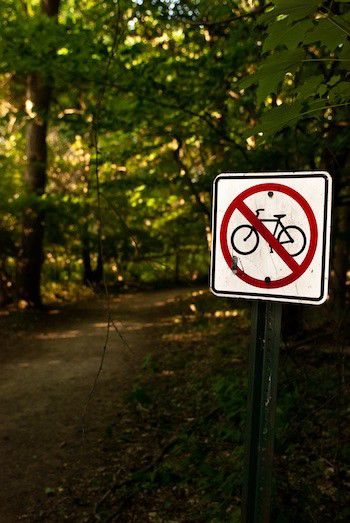 Bikes are currently banned on Eagle Creek's nature trails. Riders are asked to stick to the roads.

The Hoosier Mountain Bike Association would like to upgrade lesser-used trails on Eagle Creek's west side for mixed-used purposes — including bike traffic. Opponents counter that such an upgrade could carry detrimental consequences for park wildlife.

Bikes are currently banned on Eagle Creek's nature trails. Riders are asked to stick to the roads.

For more than a decade, Hoosier mountain bikers have been

transforming parks across the state, building and maintaining dozens of

Bikers have now set their sights on Eagle

, the city's largest, hoping to turn a mishmash of poorly

Supporters argue the new trails could bring in hundreds, if

not thousands of new users to the park, and bring in much needed additional

revenue to the cash-strapped Indy Parks.

pedal pushers invading their trails and potentially disturbing the wildlife

they love to observe.

"If you bring in hundreds of people (to that section of

the park), it changes the character, serenity and quaintness of it forever,"

, said. "That has to be heavily considered."

nature? Is mountain biking an appropriate use of space so close to a nature

preserve? Can bikers, hikers and other trail users co-exist on the same trails?

Officials have long been opposed to mountain biking at Eagle

Creek, but a recent change of leadership at the parks department and Mayor

support of bicycling in the city have thrown open the

possibility. Hundreds of remonstrators from both sides of the issue packed the Pike

recently to give their thoughts during an Indy

There's currently no timetable for a decision to be made,

reality at the park. Trail designs would have to be approved and then brought

to life by Hoosier Mountain Biking Association's army of volunteers.

According to information supplied by trail opponent Mary

Bookwalter, the west side of the park is home to several bird species that are

rare or imperiled in the state, including the black-crowned night heron,

Henslow's sparrow and the blue-winged warbler. Birdwatchers consider that

Nature Preserve and the more heavily trafficked east side of the park.

A similar situation unfolded in Fort

trails, claiming birds would be affected. A comprehensive Purdue naturalist

area. Studies are ongoing, but there has been no evidence so far the trails

have had a negative impact on the bird species at the park.

president and one of the loudest proponents of

the trails, believes building better, sustainable trails that can be used by

both hikers and bikers would be a better for the birds in the long run.

"The current fall-line trails cause erosion and are

ultimately damaging the environment," Arlinghaus said. "We want to

build trails that will keep people on them, and not traipsing through the woods

Birds do nest on the west side of the park, but it's far

from pristine, virgin forest. Much of the property is reclaimed farmland and

filled with barbed wire and garbage. Because that area of the park is so

acts there. Adding trails and mountain bikers to the mix would keep the area

Bookwalter was sympathetic to the bikers, but scoffed at the

notion they could observe nature the same way she does.

the snake on the trail," Bookwalter said. "You're running it over."

Arlinghaus said many of the trail opponents have outdated

and false notions about mountain bikers that have led to their consternation.

trail with little regard for other users, he said.

and other areas of the city and state. It's hard to get

Many opponents are open to bike trails, but only on the more

disturbed. They also insist on a one-to-two-year trial run before the trails

side would spark battles with other, much larger user groups, namely hikers and

Mountain bikers seem amicable to a compromise but are

reluctant to spend months or years building trails for a mere trial period.

Arlinghaus said his group has more than proven itself over the years, referring

to its close relationship with the Indiana

, which gave HMBA its Trail Organization of

Mountain biking is currently permitted in three parks in

Park on the Northside, and Southwestway Park on the Southside. At each park,

HMBA volunteers not only build and maintain trails, they often clean up trash,

fight invasive species and other tasks.

Although the mountain bikers built the trails, other groups

use them, as well, and are given right-of-way. At Fort Harrison, signs line the

When city officials do decide on the trails, at least one

group is likely to be left angry.

"Nature is at a premium here (in Indianapolis),"

said Jeff Stant, a new trail opponent. "It's a shame two groups with

overlapping interests have to go to war over it."