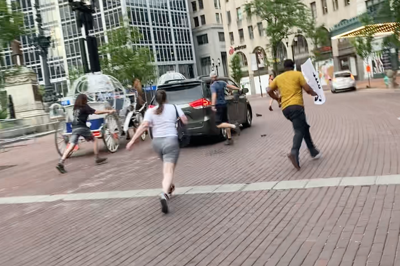 According to court documents, Diane Goebel, 68, has been charged with criminal recklessness with a deadly weapon after running her van into protesters June 8. Before her identity became public, demonstrators referred to Goebel as “Minivan Karen.”

The incident was widely documented on camera and video, with several members of the demonstration at Monument Circle struck, four with minor injuries.

Despite documentation, Indianapolis Metropolitan Police Department (IMPD) officers did not arrest Goebel after the crash.

“There are conflicting accounts of what occurred,” IMPD said in a statement. “At this point in time, investigators are still gathering and analyzing information. We continue to ask residents who may have witnessed the incident or know of additional video to contact investigators.”

According to the statement, Goebel called the police immediately after the crash – which occurred at roughly 8:30 p.m. — and was cooperating with the investigation.

However, several protesters, including Mat Davis, were upset with what they deemed to be inaction on the part of IMPD.

“’Minivan Karen’ didn’t face any consequences,” Davis said in an interview  after the crash. “Now, if that was minivan Keisha, she wouldn’t have made it off the Circle.”

A person drove a minivan through a small crowd of demonstrators downtown June 8 on Monument Circle.