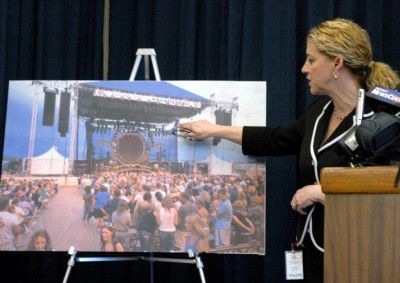 Indiana Department of Labor Commission Lori Torres pointed out the spot Wednesday where a stagehand was located when the rigging collapsed before a concert last summer at the Indiana State Fair. 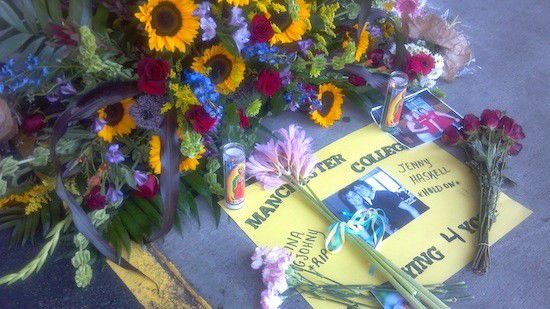 Indiana Department of Labor Commission Lori Torres pointed out the spot Wednesday where a stagehand was located when the rigging collapsed before a concert last summer at the Indiana State Fair.

The Indiana Department of Labor

announced Wednesday that three groups will be fined a total of $80,800 for

workplace violations that could have contributed to the Indiana State Fair

on Aug. 13 that resulted in seven fatalities.

A 175-day investigation by the Indiana

in violation of safety and health standards.

Mid-America, the company that made the

load-bearing roof that collapsed, received the largest penalty at $63,000.

But company officials said later that

if wind speed reached 25 mph. Also, Mid-America said one of its employees

warned the commission and Sugarland management to evacuate.

"On the evening of the incident

lightening or wind speeds of 40 mph or more, the area should be evacuated,"

"Despite these warnings, the

Indiana State Fair Commission, who controlled the venue, and Sugarland, who

controlled the concert, refused to postpone the concert and failed to implement

an evacuation plan away from the temporary roof structure," she said.

violations. Among them: a failure to consider the soil of the fairgrounds when

State officials did not blame any of

the organizations for the fatalities, but they said all are accountable for

safety violations that might have contributed to the incident.

"Despite the heroism that we

Department of Labor Commissioner Lori Torres said. "My hope is that today

represents at least a partial step towards closure for

all of those that were affected."

The state issued the second largest

penalty to Local 30 of the International Alliance of Theatrical Stage

Employees, a union that IOSHA determined was the employer of a stagehand and a

security guard who were killed by the collapse.

was acting as an 'employer' is nothing short of absurd."

He said the union's contract repeatedly

refers to the union members as employees of the fairgrounds.

has never made a case against a union for safety and health standards before.

"The union provided the

supervision, the discipline, the training, and had the authority to discharge

IOSHA found that the union failed to

provide fall protection equipment and training to the workers, among other

The appeals go to the Board of Safety

Review and can then be challenged in court, Torres said.

$6,300 for its IOSHA violations, which include failure to assess safety

measures on the fairgrounds. The commission released a statement following the

"Though the IOSHA report focuses

on employee safety standards, the commission initiated a review of all of its

According to IOSHA Deputy Commissioner

Jeff Carter, one problem in the stage collapse was that no one person had the

authority to cancel the show in an instant. Every group involved had a

"I think that is part of the

problem, when it comes to these concerts," Carter said. "It was quite

a learning experience. There's an awful lot of people

that seem to be in charge up there."

The state fair has been working to

improve its safety measures since the incident.

"We have created a new

plans, and completed emergency evacuation training for all employees,"

Lawmakers are also considering an

The Indiana General Assembly is moving

functionality of the structures.

Cox is a reporter for TheStatehouseFile.com, a news website powered by Franklin