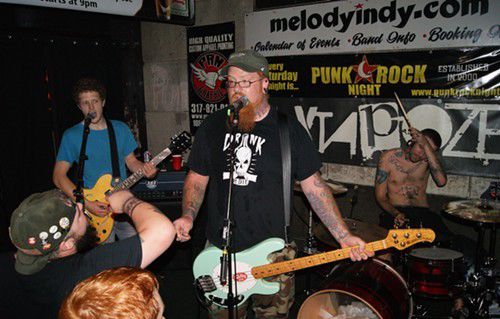 From Barfly: Damon Lyden of The Involuntary's

From Barfly: Damon Lyden of The Involuntary's

Every so often, when I start taking life too seriously and my low decibel hearing gets too acute, I head down to the Melody Inn to catch their weekly Punk Rock Night. There, every Saturday since 2000, you can find a lineup of local/regional punk and metal bands, along with a cast of characters in the audience, who will rock the house from 10 p.m. until well into the morning, just like they did last weekend, with a lineup of four or five Indy-based bands.

Seriously, if you want to know what it feels like to have your face burned off by sound vibrations, or to have an NFL-lineman-sized bassist screaming in your face and possibly spitting beer at you, stand front-and-center at the Melody’s pint-sized stage on almost any Saturday night, or at least on any Saturday night when The Involuntary’s are playing.

The Involuntary’s are fronted by Damon Lyden, founder and owner of the Sinking Ship, a new bar up on College Avenue and 49th Street which caters largely to the punk crowd. Lyden and The Involuntary's are well known on the Indy punk circuit, a fact that was evidenced by the number of fans who stayed at the Melody into the wee hours Saturday night to catch the band’s closing set. It must be some kind of tradition to spit beer on Lyden as he plays, because no less than a dozen drunken fans did so during the set, and had the same done to them in return. The Involuntary’s burned down the house with their raw, angry, thrash-punk laced with a sardonic sense of humor, as displayed by tracks like “Helen Keller Was a Socialist.”

The Classless had warmed up the crowd the set before with their fast, riotous punk, delivering some of their own catchy tunes like “Every Night” and “The World is in Your Hands,” while nailing a punk cover of “Runaround Sue” that made it astonishingly clear how punk developed in the first place: you take old fashioned rock, speed it up, dirty it up and add more attitude. Catch these guys on Saturday (Sept. 10) at the Hoosier Dome, opening up for Three Bad Jacks.

Before them were the foursome Squared Away, whose testosterone-heavy swagger (and one awesome moustache) makes them seem like a pack of unruly British sailors from the early 1800s. You can just see chaps like these falling victim to a press gang in some rural Irish town in a bygone era, and then being forced to spend the rest of their lives at sea: loud, drunk, and slightly pissed off, but not so much that they don’t forget to enjoy themselves. They played a few of their own songs and a few great covers, totally grunging-up Steve Earle’s “Devil’s Right Hand.”

Opening the night was Subatomic, a trio that features the brother and sister team of Ken and Krystal Keener on guitar and drums respectively, and their newly acquired bassist Nick Vampire. Saturday was the first Punk Rock Night for these kids, and they really put it down, especially on songs like “No," and "Insecurity," on which they called their roadie and sometimes bandmate on stage to play drums while Krystal took over on vocals for “Insecurity,” screaming and wailing the frustrated, morbidly angry lyric “Look at me!” and tapping into the desperate, attention-seeking teenager trapped inside all of us.