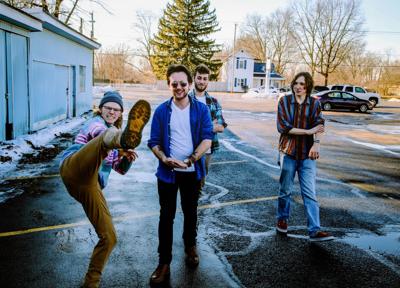 Final ranking will be determined by a combination of judges' votes and audience votes. Each audience member will vote for three bands, and the outcome of those votes will make up 62.5% of the final scores. My goal with this series of articles is to give you a chance to get to know each of these eight finalist bands a little better before the finale at the Vogue.

Dudes you meet at house parties are better than college classmates

Porch Kat will have been an official band for two years in March. The members all met at Ball State University, where ironically they were all TCOM(telecommunication) majors even though they never had a single class together as a group.

Alex Kilmer and Matthew Keyser had known each other since high school, and they even had started working on music together back then. They went to Ball State together and ended up being roommates. Through house shows, Alex and Matt gott to know Brandon Gick, who then introduced them to Tyler Padgett.

At first, the group would just get together and hang out, maybe jam occasionally. But they had good musical chemistry and decided it wasn’t something they wanted to leave to chance. So they started working on original music.

The band members are split between two cities. Matt and Alex still are living in Muncie until their lease ends this summer. Tyler and Brandon live in Indy. This has been a challenge in scheduling practices and shows. They used to perform at gigs consistently, but now with over an hour’s distance between them all it is more daunting to get their schedules to merge.

The name Porch Kat comes from a cat that became their unintentional mascot. Matt and Alex shared an apartment, and there was an outdoor cat that belonged to their neighbor that decided their porch was going to be his new residence. The neighbors eventually just gave the cat to them, and he was dubbed Porch Cat.

The cat began attending practices and was a regular visitor, so when they were stuck on deciding their name it only seemed fitting to name the band after their mascot. Porch Cat has since passed on, but his legacy is still going strong.

The eclectic stylings of Porch Kat

The influence and inspiration for their music come from a variety of genres, including punk, progressive rock, jazz, hip hop, the blues, and classic rock. In their first EP they tried to showcase their diversity and all of the different genres they want to represent in their music, while still sounding fluid and eclectic.

They recently released their second EP and are working on writing an album. Their second EP was more cohesive in its sound than the first was. They describe it as a Latin jazz and chill vibe inspired sound.

The band has no plans to nail down a predictable sound anytime soon.

Says Tyler: “The philosophy of this band is kind of we do whatever we want. It's a creative outlet for us. And since we all listen to such different shit, we feel like that will keep coming out. Because when we sit down to write, we have so many types of music that we listen to and that we get inspiration from, and we hope that it keeps coming through like it has been.”

For their first EP they did a release show, which went well. They will be doing one for this EP as well. They say that when the album comes out they may switch it up and go to a listening party, since it will be a lot longer than the EPs have been.

Alex and Matt both dropped out of Ball State to pursue music full time. And while being in four bands has caused some scheduling complications, Alex says he feels like he has to fill as much time as he can with music because he left school to pursue it.

TSwift, Katy Perry, Billie Eilish, Lynyrd Skynyrd, Blink-182, Czarface, Infant Annihilator, and Ghostface Killah are just a few of the artists that Porch Kat members listen to who might surprise you.

Alex is a big pop fan. Matt has a soft spot for old twangy guitar riffs. Brandon’s range expands into a lot of rap. And they will continue to explore all genres of music in the future. Brandon actually has a tattoo of Blink-182 on his ass. He got it there because his parents are very conservative, and even though he was 18, his parents threatened to kick him out if he got a tattoo. So he got it where it could be easily hidden. Now he is glad that it isn’t front and center, just because he feels like Blink-812 are not as good as they used to be. But he still loves them and loves the tattoo.

Almost a year ago, the members of Porch Kat sat down and created a five year plan. To their surprise they are about to check off what they thought would be their five year goal, playing on stage at The Vogue. Their most memorable show to date was the first time they played at the Hi-Fi. They played at a “new faces” night that happened to fall on Brandon’s birthday. And now the show at The Vogue is going to be on Tyler’s birthday. So since they have checked off their biggest goal already, they are planning on going bigger

In the near future Porch Kat would like to expand their presence in other midwest cities. They have already played in Cincinnati and would like to begin doing shows there more regularly. They also would like to play in Chicago, Louisville, and other big cities in close-by states. For Indiana, their next big goal is to play on a stage in the Old National Centre like the Egyptian Room.

The band would like to tour this summer, and they are exploring the possibility of working with a local band, or a few local bands, to do a smaller regional tour. They would love the opportunity to work with local bands like Dizgo, Huckleberry Funk, The Palace, Side Hustle and many others. The members have a passion and love for the Indy music scene and want to work with other artists who feel the same way.

“I'm going to have a shark tank in my house. That's how I’ll know I’ve made it.” This was Matt’s response to being asked what he felt like he needed to achieve to have made it as a musician. Other members agreed that playing a venue like Red Rocks would be their point where they felt successful enough to say they made it as a band.

For the Fans and Potential Fans:

For the bands we will be playing with:

“Everyone was so worthy of being there on that stage. We feel so new but so lucky to be playing with all of you. Everyone is amazing. We can’t wait to work with you. And hope to keep working with you forever because Indy music is amazing.”

A group of cats is called a clowder, and since they have yet to have a fan name present itself, how would the fans feel about being called the klowder (clowder with a k)? If you have any better ideas, send them the band’s way on social media!

Porch Kat will be playing on April 3 with Joshua Powell and Chief Muncie.

Porch Kat has active social media. They use Instagram and Facebook regularly. They are on all of the mainstream streaming sites, as well as even having their music available for people to use on TikTok. One of the coolest things for them has been having fans reach out through social media, so give them a shout out if you get the chance!