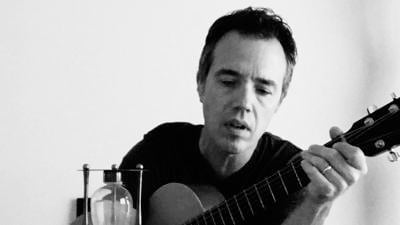 Legendary singer-songwriter John Prine passed away on April 7, 2020 after a battle with COVID-19, leaving the music world at large in an overall state of mourning. For longtime John Prine bandmate and Indiana native Jason Wilber, however, the unfortunate loss of Prine was even more devastating.

“He was a prince,” says Wilber, who played in Prine’s band for 24 years up until his passing. “He was a one-of-a-kind person, and not just in his artistry and unique style. He was just a wonderful human being.”

Days after the loss of Prine, Wilber graciously took some time to chat on the phone with our Seth Johnson, discussing how he first met Prine and what he gained from playing in his band for more than two decades. Additionally, Wilber elaborated on his forthcoming solo album, Time Traveler, which is due out on May 29 and was made possible with the help of esteemed producer/engineer and Indiana music legend Paul Mahern.

SETH JOHNSON: I know you’re originally from Bloomington. What was it like growing up there?

JASON WILBER: I was actually born up in Fort Wayne, but I moved down here to Bloomington just before my sophomore year in high school. So I went to Bloomington South for my last three years of high school, and I’ve lived here in Bloomington ever since.

Bloomington was a great place to be back then just because there was such a vibrant live music scene. There were a bunch of record stores, music stores and places to go hear music, as well as lots of really great bands and musicians. So I just soaked it all in, and played in a lot of different bands with all kinds of different people.

JOHNSON: What were some of the bands you played in there?

JOHNSON: I see that you’ve made your past three records with Bloomington producer and Indiana punk legend Paul Mahern. How did you first get connected with Paul?

WILBER: It’s funny. The first time I worked with Paul was when I was in the Mere Mortals 30 years ago. And then, he was just someone I’d see every once and a while, and then maybe occasionally work with on something over the years.

I knew he was a really good producer and engineer, and I just reached out to him for my Echoes record, which we recorded in 2015. I reached out to Paul to produce and engineer that one. It just went so well that I went back for the next two as well.

Paul is a really great engineer and has really great musical sensibility. We have some of the same influences and interests, but we have a lot of different ones too. So we think of things that the other doesn’t think of and bring different perspectives to it.

JOHNSON: How did you first meet John Prine?

WILBER: The first time I met him I was actually about 16 or 17 years old. I think he was in Bloomington working with Mellencamp on something, but I don’t know what. It would’ve maybe been around ’86.

I played in a little band called Tumblin’ Dice. The Bluebird here in Bloomington used to have Happy Hour music pretty often, especially on Thursdays and Fridays. One night, we played that Happy Hour, and I stuck around to hear the Ragin’ Texans. John Prine came in. I think Larry Crane [of Mellencamp fame] might’ve brought him in. But he [John Prine] came in and was hanging out with the band in the dressing room. They said, “Hey. Why don’t you get up and play some of your songs?” He said he would. Jim Bracken of the Ragin’ Texans said, “Man, I don’t know what to play with this guy. Why don’t you go play with him? I’ll just watch.”

So I got up there, and we played a little 45-minute set. We just kept playing, and it was really fun. Somewhere, I have a great picture of me, Gordon Bonham, Brian Lappin and John Prine all on stage that night. So that’s the first time I met him, but I really didn’t get to know him.

Years after that when I was about 24 or 25, John had asked Larry Crane to help him put a road band together. David Steele, who was about my age, had been playing guitar in Larry Crane’s solo project. He [Larry] convinced John Prine that he needed another guitar player and should hire David. So he did, and they toured for about a year after John’s Lost Dogs + Mixed Blessings record came out.

Towards the end of that year, Steve Earle offered David Steele a job. David took it and recommended me as a replacement. Since I also knew Larry, he gave me the recommendation as well. So John’s manager just called me up and asked if I wanted to audition to be John’s lead guitar player. I did and got the job. I had no idea it would turn into a 24-year odyssey.

JOHNSON: What do you remember about that audition?

WILBER: I had a couple recordings of their current live show. I had a part-time job working at the university then. And every night when I’d get home, I would sit down with that tape and play through all the songs. I did that pretty much every night for the month leading up to the audition, so by the time the audition rolled around, I really knew the material backwards and forwards.

It’s funny. John actually had the whole band come to Bloomington, which makes no sense. We played in this little warehouse somewhere down on South Walnut Street. It was the whole band. We basically went in there and played the whole show they’d been doing. At the end, John offered me the job, and I took it.

JOHNSON: You had played with many musicians before John, and are also a solo musician in your own right. What stood out about playing in a band with John though?

WILBER: John is one of the all-time great songwriters. [laughs] I’d never played with anybody like that. Not to take away from anybody I had played with, but…he was somebody where I had a bunch of his records and was a huge fan. So to suddenly be the guitar player in his band was pretty mind-boggling.

JOHNSON: In what ways did John influence your own songwriting?

WILBER: His songwriting was so uniquely his own. I’ve known different songwriters over the years that would occasionally email or come up to me and say, “Hey man. I wrote a John Prine song.” Meaning they thought they’d written a song that was kind of in the style of John’s music, but it would never even be close.

John wasn’t writing in a style. If you spent any time with him at all, you would realize that the way he talked, saw the world and told you about things…it was just like his songs. That’s just who he was. In some ways, he was so unique that it was hard to take away much from his songs that you could apply to your own songs.

JOHNSON: You have a new solo album titled Time Traveler due out on May 29. When did you start piecing that album together?

WILBER: We recorded it last summer. Some of the songs on that record I wrote within the month or two before we were recording them. But the oldest song on there is called “The Disappearance of Bigfoot,” and I wrote the first draft of that in 2006 or 2007. It’s so hard to be objective about your own work, and I feel like one of the devices you can use is to get away from things for a while.

I guess one of the things that I did learn from John but haven’t necessarily applied very well is to have really high standards when it comes to songwriting. There are more than a few songs that I’ve written and recorded where I think, “Ah, I never quite got that one part right, but I just went ahead and put it out there anyway.” But a lot of times John wouldn’t do that. He would either get it right or just never let it come out.

JOHNSON: What significance does the title Time Traveler carry? With how strange of a world we’re living in right now, it oddly seems very fitting.

WILBER: I can’t exactly remember what inspired the “Time Traveler” song. Part of it was that I liked the juxtaposition between folk music and science fiction.

Also, when I’d been looking for artwork for my Reaction Time album, I stumbled into this genre of artwork called retrofuturism, which was from the ‘40s through ‘60s. It was artists’ illustrations of what they thought the future would be like, with people living on other planets and space colonies. I just found that really fascinating. Looking at it now, it looks so kitschy and campy. But to them, it was like, “Wow. We’re drawing these amazing pictures of what the future will be like.”

It’s funny how much science fiction has turned into reality in our lives over the years, but how a lot of it is not quite like we thought it would be. The funny thing is…I had no idea that any of the themes on the record would be any more timely right now than they were a year ago. So it’s really just kind of a coincidence.

I guess this could maybe be another lesson from the world of John Prine, but…so much of good art is just feel. If you go by your instincts and have a feeling about something, that’s usually what you should go with. So that’s something I try to do more of — to respect my feelings and my instincts when it comes to creativity.

An Honest Interview with Crescent Ulmer

Keeping It Real with Courtney Barnett

Jason Isbell Reflects on a Life In Music

A Quarantine Conversation with Peter Oren

Fresh off the release of his latest album, ‘The Greener Pasture,’ the Bloomington singer-songwriter reflects on life in isolation and much more.