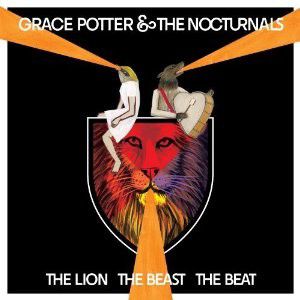 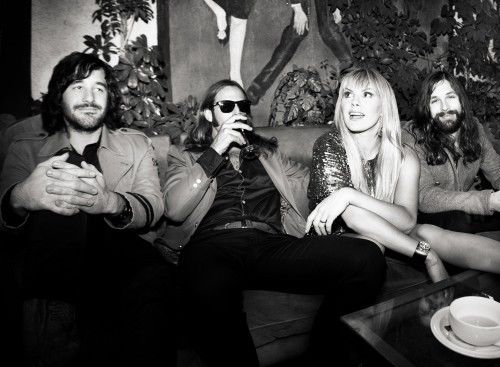 Grace Potter and the Nocturnals

The Lion The Beast the Beat

Nearly two minutes into the title cut of their new album The Lion The Beast The Beat, Grace Potter and the Nocturnals break into Who-like power chords and drop in a disco backbeat. It becomes a huge sound, with a reaching-for-an-anthem quality - like Heart or Pat Benatar might do in their prime.

It's a different sound for Potter and her group; the new album is less blues, and more of a full body leap into radio-friendly pop music, with disco thumps and sweeping choruses. Yet, it's still a record that rocks and can move listeners within the big sounds and lyrical turns; it's especially effective when Potter bares her emotions.

There's no doubting Potter's majestic voice - whether a whisper or a shout, hers is one of the great sounds in rock.

While her 2010 self-titled album featured Grace and the band in a black and white cover photo, the new record's cover image is more art, less grit. And that's the sound of the music, especially compared to the pretty-and-loose outing of the last record.

"Never Go Back," produced by Black Keys' Dan Auerbach, dives into programmed beats and loops, with Potter's voice rescuing the piece with her cooing, razor-edged vocals.

"Stars" is a beautiful, acoustic-based tune of redemption, with gorgeous piano and soaring vocals. It appears twice, the second time as a bonus track duet with Kenny Chesney. "One Heart Missing" is a winner, taking a U2 arena rock trajectory to hurt and love. "Parachute Heart" echoes Fleetwood Mac, sounding much like Nicks and Buckingham, circa Rumours.

Is this latest release a grasp at finding a more wide-ranging fan base, or will it alienate her current fans? Hard to say, because her voice is still something marvelous. In the end, music is always redeemed in the live performance, and Potter and her band are a great live band.

"Turntable" bites like the Potter of old, with an urgent guitar strapped to a disco beat.

The album is a melting pot of new sounds with a whiplash personality, breaking a blues and rock stereotype that may have existed with the band's listeners.

Producer Jim Scott, best known as a go-to engineer and mixer for bands wanting an earthy, homegrown-but-polished sound (Tom Petty and the Heartbreakers, Wilco, The Tedeschi Trucks Band), helms the majority of the record.

The lyrics are sometimes buried by more musical weight then the songs can shoulder. Much of the record feels like it is trying to make a "grand statement"; simplicity lost in the chase for a bigger sound.

Still, it is a record that blossoms through repeated listens, softening the new layered sound we get from the guitar-drums-and-keys rockers.

Potter closes the album with a duet with Willie Nelson on her song "Ragged Company", originally from her 2005 Nothing But The Water album. The majesty of the song and the brilliance of Willie lend gravity to the music and the pairing serves as reminder that as Grace Potter and The Nocturnals are growing, they can do it without forgetting a simpler past.