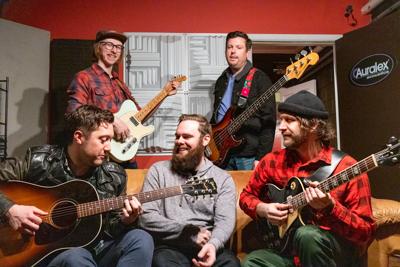 Final ranking will be determined by a combination of judges' votes and audience votes. Each audience member will vote for three bands, and the outcome of those votes will make up  62.5% of the final scores. My goal with this series of articles is to give you a chance to get to know each of these eight finalist bands a little better before the Finale at the Vogue.

The Jake Schlegel band in its current composition has existed only since September. Most of the members have known each other for years in some musical capacity. Jake Schlegel and Jason Barrows have been working together since the creation of Jake’s last record. They met when Jason sold Jake an acoustic guitar, at a time when Jake had just begun performing music at a local church. Jake has been actively making music for about three years. Last year he released his first full length record, which Jason plays guitar on.

With Battle of the Bands coming up, Jake decided he wanted to get a full band together to compete. He initially reached out to Jason. Jason has been entrenched in the Indianapolis music scene for almost 10 years. The next member brought in was Preston Ott. Preston has played guitar with Jason off and on since he was 14. Jason brought him into the band because he knew Preston’s playing style would work with the type of sound and experience Jake was trying to produce.

Jason then reached out to Ryan Freeman. Ryan is the drummer for the band. Ryan and Jason both had played with Danny Napier in the past, and he was brought into the group as the bassist. Preston credits Jason for bringing such a well suited group of people together so quickly.

“Jason is the glue that keeps us all together. He knows everybody.”

While the band hasn’t been playing together long in their current composition, they all are talented musicians who have sound profiles that work well together. They plan on continuing to work together after Battle is over and have already started working on new projects and new music as a group.

“We are at heart a rock band. We are musicians, producers, engineers, music-gear nerds, and analog lovers.” This is the band's philosophy, as described by Jason.

In addition to being members of the Jake Schlegel band, these guys live busy lives. Danny is a purchasing manager for an aviation company. Preston works 50 hours a week as a cook. Ryan owns and operates The Launch Pad, which is a two-part operation in Plainfield, Ind. The Launch Pad is home to The School of Rock, and it also is a fully functional studio. Ryan also plays in several other bands. Jake still performs music at his church, does landscaping, and he also owns and maintains rental properties. Jason was, prior to the last year, working for five years in a national touring band, and for a total of 10 years he has been touring nationally as a singer-songwriter. Jason also writes music for TV, including music on the show New Girls, and on the Netflix exclusive Love.

The Message and the Music

The creative process that Jake goes through is rapidly evolving. He was a solo artist for the last three years. He would hire local musicians to come in and record for his records and on occasion to play with him live. But the cast has been rotating up until this point. Now that a core group of members has been established, more moving parts are involved in the creation of a new song. Lyrics still are mostly created by Jake, with phonetic tweaks and input from Jason.

While the band hasn’t set out to address any specific themes, Jake mentioned that if you listen to his music, both in the past and in the future, you will notice that drug addiction is a recurring theme. He credits his personal history of addiction, as well as the heavy saturation of it that we see in the midwest, as the reason it continues to come up. He has lost three friends in the past five years. Jake mentioned that while he is in recovery, he is constantly exposed to it in life, and it has affected his life in every way. It affects who he is today, who he was, and his relationships with other people. It is a source of strong emotions for Jake, and it comes out in the lyric writing process. He hopes that in the future if the opportunity arises he may be able to help another music artist quit their drug addiction and be inspired in the way he was inspired.

The Road from Here

As a band they aspire to become a “super band”, a band that they would enjoy seeing live.

They want to perform a set that is dynamic and exhibits their influences and range while also maintaining an overall band sound. They pride themselves on being able to range from an alt-country-rock sound to bluegrass roots-music acoustic songs and piano ballads, all in one set.

The band takes inspiration from a wide range of artists. They describe their personal sound as being a midwest rock and roll band. They are influenced by artists like Pink Floyd, Neil Young, Sturgill Simpson, Tyler Childers, Chris Stapleton, and Ryan Adams. Their musical style takes inspiration from bluegrass music, heartland rock, Americana rock, and what they describe as stoner country.

“Overall I think we are inspired by anyone who is a great singer-songwriter honestly,” Jason said, after having some difficulty condensing the wide range of inspirations that the band draws from.

Another common thread among the members of the band is their love for albums. They currently are writing their next album. They estimate that they have about half of an album completed. They have not begun the recording process yet, but they promise to keep their fans posted. Don’t be too disappointed, though. On an undisclosed date in February they will be releasing a three-song music video compilation. The songs that will be included are one new-release song and two off the last record that have been rearranged. The songs will be recorded live in a studio and will be done in a style intended to give the viewer an experience similar to what they would get seeing the band live.

The band has not been planning any extended tours, but they will be playing regional shows. They have upcoming dates in Chicago, Cincinnati, and Lexington. They try to limit the shows they play locally in Indianapolis, so that when they do play locally it has more of an impact and they have more fans come out. They have been networking with bands out of Cincinnati as a way to expand their fan base in other states through show swapping, which is what most of their local Indianapolis shows will consist of in the future.

Jake’s sentiment on the bucket list best represents the band’s love for what they do:  “In general, any place that has an appreciation for music like ours is a place we’d like to play.”

As someone who has spent a lot of time touring, Jason describes festivals as a unique opportunity to actually spend time with other bands and musicians.

“You get so busy with the in and out, one venue to the next, everything becomes mechanical. At a festival you get to wander around, see other bands perform and hang out with them. It’s musical comradery.”

In their ideal scenario, this year the band will be driving around in their new van, touring regional shows this summer, finishing up their record, and playing at festivals.

The Band and Their Fans

Jake and the other members don’t have much of a taste for social media. But that doesn’t mean they don’t want to interact with their fan base. They prefer to live life presently, and social media can distract from that. So if you are checking them out on social media platforms, the majority of what you will see will be promotion-based. You also can subscribe to email updates from Jake.

They do plan on doing more live-in-studio videos. It is something they enjoyed doing. Videos are also how they have enjoyed learning about and interacting with the musicians they like on social media. They feel that videos can give a better sense of the band and who they are as people, as well as who they are as musicians and players.

The band feels like their followers are mostly composed of music lovers. A step above the casual listener, their fan base enjoys learning about what gear the members are using, admiring their technique and playing style, as well as learning the stories behind the song lyrics. They feel like their fans are very lyrical content centered. And they love interacting with their fans after shows, so don't be afraid to approach them and strike up a conversation.

Getting to Know the Band: The Fun Stuff

When asked what artists the members would like to collaborate in a dream scenario, one living and one dead, we got a wide range of responses. Jake stated that they would like to work with Jerry Garcia (dead). Preston said, “To sit down with Chris Thile would be an ego death to the umpth degree; that would be incredible.” For his choice of the dead, it would have been Prince. For Danny, the choices came quickly: Living would be Sturgill Simpson, and dead would be Neal Burgess. Ryan’s choices were John Bonham for deceased, and anything involving Led Zeppelin for the living.

Musical guilty pleasures, or rather musicians that the members enjoy that they think may surprise you. Let’s see if you can match them.

For the Jake Schlegel band, competing has never really been a huge part of why they enjoy making music. Their goal with the competition is to go out and have fun. They have worked with a lot of musicians they have competed against in the battle. Jason formerly played with J. Elliot, and they still remain close musical friends, as they have been for over a decade.

The band is currently trying to come up with a new name, in the format of Jake Schlegel and ___ or Jake Schlegel with ___. So if you are a creative individual and get hit with some inspiration, send it to them on social media!

Jake Schlegel is now a licensed commodity, available on Art Lists, a streaming service for filmmakers and videographers. Spread the word and keep your ears open; you could end up hearing a Jake Schlegel song in a movie in the near future.