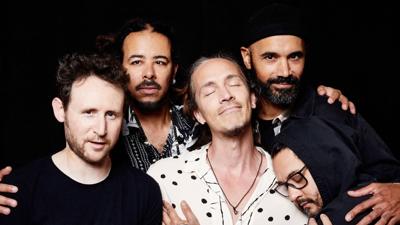 In the early days of Incubus, turntablist Chris Kilmore remembers a lot of nonstop action.

“We took four weeks to write Make Yourself and four weeks to record it. And then, we were back out on the road,” Kilmore says. “Early in our career with this band, we didn’t stop. You were either touring or coming home to record.”

Now celebrating the 20th anniversary of Make Yourself, Incubus visits Indy for a show at the Murat Theatre on Saturday, Nov. 14. Ahead of the show, our Seth Johnson caught up with Kilmore for a phone interview, discussing the making of Make Yourself and much more.

SETH JOHNSON: Who were some formative DJs for you that initially piqued your interest in the art form?

CHRIS KILMORE: I had a local guy in my neighborhood growing up in Pennsylvania. His name was Brandon Coy, and he went by [the moniker] DJ B. Coy. He deejayed this under-21 spot that I used to go to when I was 14 or 15 years old. It was kind of like a YMCA, but they had a club where they’d spin on Friday, Saturday, and Sunday. So he kind of took me under his wing.

As far as the big DJs, Jazzy Jeff is probably one of my bigger influences. DJ Scratch and DJ Qbert too. I think DJ Qbert is probably the best scratcher in the world. [Other influences include] Cut Chemist, Nu-Mark, Mix Master Mike, and a lot of the X-Ecutioners, like Rob Swift and Roc Raida.

I was really into hip-hop in the late ’80s and early ‘90s (and I still am into hip-hop), so all of those DJs are pioneers in my eyes.

JOHNSON: As a member of the Jedi Knights DJ crew, you worked alongside other DJs. But what adjustments came with working alongside other musicians as part of a live band?

KILMORE: Building a song with a DJ crew is slower paced. It’s similar as far as one guy does one thing and another does something else, and you do have to dig and search for records. But with a live band, it’s instant, especially with the good musicians that I’m surrounded by. They’re instantly changing stuff and moving things around.

For me, that was one of the harder things to adjust to.It was like, all of a sudden, “Okay, let’s change this, and let’s change that.” And I was more used to, “Let me go dig through my crates and find the record, and I’ll see you guys in about 30 minutes.” [laughs]

So I learned how to get real quick and add improvising. And then, eventually, the DVS scratch systems came out, and everything went digital. Then, it became really quick, so that saved my life. [laughs]

JOHNSON: When you first joined Incubus in 1998, what were those early sessions like? Were the guys easy for you to gel with?

KILMORE: It actually really was pretty easy for me. They had called me on a Friday, and asked if I would be able to rehearse the next day. I said yeah.

When I had my first tryout, it was an hour session at this place called Sound Arena out in the valley. We sat around for 45 minutes just talking. Little did I know, they were really just trying to get an idea of my personality. So we were talking everything from girls to aliens — all kinds of crazy stuff.

When we had about 15 minutes left, the bass player at that time (Dirk Lance) was like, “Why don’t you show us what you can do?” So I showed them some battle routines, and I could tell that they had never really been around that before. They looked shocked, and their jaws were a little dropped.

They gave me a cassette tape with shitty live recordings of Fungus Amongus and S.C.I.E.N.C.E., and were just like, “Take these, see what you think, and we’ll be in touch.” Well, later that night, they said, “Can you come rehearse on Sunday?” I was like, “No. It’s Valentine’s Day, and I’m dating a Dominican redhead from Queens. So I cannot miss that.” [laughs] So then, they were like, “Well can you learn all these songs on Monday? Because we have a show on Tuesday.” I said yeah.

So I learned it all, and we did a five-show West Coast run. Two days later, they were like, “Alright. You’ve got the gig. We’re going to Europe. See ya in Europe.” So I went from being at home one day in L.A. to doing 305 shows that year. I started with them in February, so it was just a whirlwind.

Looking back on it, it’s pretty crazy. Even though, at the time, I didn’t think it was that crazy.

JOHNSON: With this being the 20th anniversary of Make Yourself, can you reflect on any fond memories you may have from writing and recording the album?

KILMORE: There are actually a lot. We were in this little room at Sound Arena. It was a regular rehearsal room with no windows or walls. We were just kind of jamming.

Throughout my travels, I always recorded things, whether it was just with a handheld microphone or whatever. So I pressed up all these sounds that I had from over the years into a scratch record, but that took two-and-a-half weeks to actually get. So while the guys started writing Make Yourself, I was like, “I’m just waiting for my record. I’m going to put this here, trust me.” And they were super cool with it.

They were like, “Here’s 16 bars. We’re going to leave this open for you to do whatever you want when you get your record.” So that’s how a lot of the scratching came onto Make Yourself. “Privilege” was like that. There’s that little bit of scratching in the middle, and we just left that open until I got my record.

When we actually went into the studio to record, I had a little DJ setup in the hallway. We were at NRG in North Hollywood, and there were a bunch of other bands there. 311 was there a lot of the time, and Jurassic 5 was there a lot of the time. And because I had that turntable setup in the hallway, I was always out there practicing and trying stuff. People would just walk by, and one day, Jurassic 5 was there. That’s how “Battlestar Scralatchtica” came about.

Brandon missed a day because he had a dentist appointment, and we weren’t going to waste a day. So we wrote a cool little track. I was out in the hallway scratching, and Nu-Mark and Cut Chemist walked by. I was like, “Hey. Do you guys want to scratch on this track we just did?” We went in, laid it down, and that’s how “Battlestar Scralatchtica” came about.

JOHNSON: Has it been fun revisiting Make Yourself, from a performing standpoint? Were you rusty on any song in particular?

KILMORE: For me personally, I actually really enjoy revisiting Make Yourself because my role in the band has expanded greatly into playing all kinds of keyboards and things like that. But when we were on Make Yourself, I just had two turntables. So I really get to showcase what I originally did in this band, which is really fun for me.

Sofar So Good: An Introduction to Indy’s Intimate Concert Series