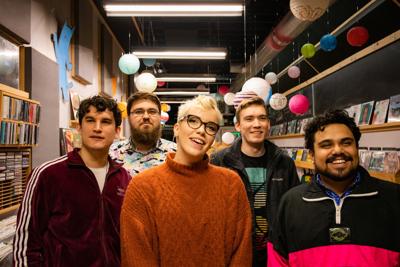 Final ranking will be determined by a combination of judges' votes and audience votes. Each audience member will vote for three bands, and the outcome of those votes will make up  62.5% of the final scores. My goal with this series of articles is to give you a chance to get to know each of these eight finalist bands a little better before the Finale at the Vogue.

This one time, at band camp. But no seriously, nearly all the core members of Forstory actually met at a music business camp put on by Anderson University. Including Sydney Frank, who would not officially join the band until nearly three years later. Michael Slonim, Cole Chavez, Gordon Housman, and Drew Montgomery made up the original members of Forstory. They started their music-making career after participating in a jazz ensemble. Sydney got to know Michael through a class at the university that she was auditing, they began working on music together, and Michael later introduced her to the rest of the band. Sydney was originally hired as the band's photographer, and the running joke is that they liked her so much they demoted her to lead singer.

The origin of their name is just as iconic as how they all met. The band had been struggling for a while to come up with a name they all liked, and that was meaningful to what they wanted to represent with their music. The actual name of Forstory was something that came to Michael in a dream, yes, really. The name Forstory represents the group's belief that the journey they are on together is just as important as their destination. The group has been through a lot of trials, both together and independently. And because of that, they value being there for each other and telling those stories. And as things continue to come together, they want to share that and those experiences with their fans through their music.

The band as they are today

If you look at the album art for most of their releases, you will start to notice an overarching theme. Each cover features a light bulb with a scene created inside of it. Sydney illustrates the album covers. The light bulb represents the band, their creativity, and the love they have for each other, as well as for their fans. The scene inside of it aims to represent the challenge or circumstances that the song deals with in some way. "Through everything that we all have dealt with over the last couple of years, the band has consistently been a source of joy for each of us, and the light bulb enduring through each single has kind of represented that,” said Michael in regards to the cover art.

Forstory describes their musical genre as indie-pop. They blend the personal music styles of each member around an indie-pop based core sound. Even though each member draws from influences and other genres, the band does not want to fall into sounding like a copy of another band's sound. They admire The 1975 because their sound was unique when they came out, so much so that other bands have replicated it. Forstory hopes to create their own unique identifiable style. They also hope to showcase each of their own backgrounds while still being able to maintain Forstory’s overall sound.

When Forstory was first founded as a group, they struggled to identify the genre of music that they wanted to belong to. Michael acredits Sydney joining them as what solidified their identity as a band. "Before Sydney joined the group, we were a little bit lost with what our sound was. Sydney helped, she was the final piece that sort of connected everything. We are all on the same page now of what Forstory sounds like, but it's hard to define. We kind of all have it in our heads and we know what it is. We just hope our music shows it too."

Cole leans toward metal, rap, and hip hop. He would love to work with Tyler Creator at some point, and he dreams of performing at Camp Flog Gnaw. Cole is in a total of three bands, while also attending college full-time.

Drew's main influences are based on jazz. When asked the question on who he would collaborate with, either living or dead, he chose Miles Davis, an American jazz trumpeter. All of Drew’s other music projects have been based in the jazz genre, so fans are often surprised when they see him playing with Forstory.

Gordon, who wasn't able to be at the interview, creates beats and EDM music as a side project. He has so far not released any of it, but would consider it in the future. Currently Gordon uses it as more of a creative outlet and another way to express himself musically.

Michael and Sydney both describe themselves as people who listen to just about everything. They share a passion for John Bellion and would love to collaborate with him. Michael stated that if he could pick someone additional, it would be Quincy Jones because they both are producers, and he has a huge amount of respect and admiration for Jones. Michael does production for other artists as a side gig from time to time. For Sydney, it would be Ella Fitzgerald. Sydney describes Fitzgerald as her biggest vocal influence. Sydney does still work in photography upon request but Forstory is her priority and focus.

The secret to success

Forstory credits all of their success to loving what they do and to the loyalty of their fans. At their very first show, they played a venue with a 49-person capacity. The band had over 125 fans show up to the show to support them. The venue was a distillery in Anderson. The side of the building was made up of several bay windows. The venue ended up opening them all up, and the fans filled not only the building but the sidewalk and the street as well. Michael recalls the show as one of his favorite moments since playing for Forstory,  "Fans were singing along to a single we had just released that morning, it was incredible. Our fans are just amazing.”

The band has also played several shows with Sofar Sounds, as far away as Chicago and Louisville. But they have their sights set on something much larger. Forstory aspires to play on the stages of both Red Rocks and the Lollapalooza Music Festival. With their pattern of smashing every goal they set for themselves and the continued support of their fans, I am confident that we will see a day that Forstory "makes it." If you are wondering what the road to Red Rocks looks like for Forstory, items on their list include doing more shows with Sofar, playing the Egyptian Room here in Indianapolis, and they are scheduled to perform at the upcoming Halfway to Mile Music Festival in Appleton, WI. They will be performing there March 6-7.

When Forstory gets to play on stage at the Egyptian Room, we are all in for a show. The band has vowed to shave their heads, or at the very least Sydney's, on stage before the performance. Sydney made this promise when she first joined Forstory nearly a year ago. "I have wanted to play the Egyptian Room since I was like 16. But I told them, I was like, 'Guys, if we play the Egyptian Room, you guys can like just like shave my head on stage. Which I've done before, but I'm thinking like bald. Something just crazy like buzzing each others' heads on stage would be wild."

Just for fun, we decided to ask the members of Forstory to tell us their musical guilty pleasures. Michael listed Lizzo, which Cole countered with saying he feels empowered when he listens to Lizzo's music. Sydney said that hers would have to be Shania Twain, because she has a lot of nostalgic memories of listening to her CD when she was younger. Cole said he honestly couldn't pick one because he listens to such a weird range of music. Everything from Death Grips to jazz. For Drew, he said he doubts anyone really knows he is into metal.

Some final words from Forstory

To anyone who hasn't checked us out yet, we are not a jazz band, we promise. We want to say thank you to MOKB Presents for this incredible opportunity. It's an honor to share the Vogue stage with some of Indy's best talent. To our fans, we just want to say come see us! This is going to be a great show at a fantastic venue, and we're ready to throw a party!

Stuff, things, and other reminders:

●     Come support Forstory and the other seven finalist bands on February 15 at the Vogue! I hope to see you all there.

●     If you can't make it, you can support Forstory on social media and streaming platforms, or by coming to the festival in Wisconsin when they perform on March 6-7.

●     Forstory had two new singles come out on February 7. You can check them out on any streaming platforms.