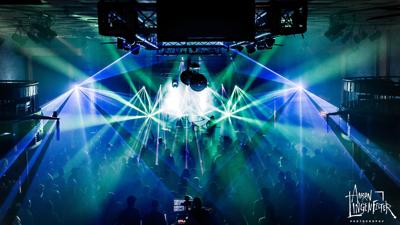 Andrew Pickel and and Kevin Hinnefeld have played music together for a long, long time — since middle school, in fact.

“It started out very roughly, with him just showing me how to play a couple chords on an acoustic guitar,” Pickel says. “And then we finally got a cassette player a week later and started recording cassettes in his room.”

Now, the longtime collaborators can be seen up on stage as a part of the Bloomington-based jam band Dizgo. On Feb. 1, in fact, Dizgo will play their latest headlining show at the Vogue, before performing a noteworthy run of dates across the Midwest.

Although they started playing music together in grade school, Hinnefeld and Pickel pinpoint Elephant Quiz as their first serious project.

“It was 2006 when we formed a band called Elephant Quiz,” Pickel says. “That lasted for quite some years, but we were more experimenting and having fun. Just friends playing music with a variety of different other people that were in the band as well.”

Following the end of Elephant Quiz in 2015, Hinnefeld acquired a keyboard and began surveying new sounds. From this exploration, the seed for Dizgo was planted.

“I started playing synth bass on top of pad keyboards, so I could do bass and keys at the same time,” says Hinnefeld, who had previously just played bass in Elephant Quiz. “I was really fast at creating a bunch of cool ideas that sounded good and filled out because I had the bass and the keys. It sparked a whole different world.”

Dizgo played their first show at the Bluebird in Bloomington on April 14, 2016, opening up for their friends in Bloomington-bred band The Main Squeeze. From there, the band strategically began expanding on their fan base in surrounding markets.

“Pat [the band’s manager] was always hinting at this idea of needing to grow an aspen tree that starts where it starts but then the roots go out,” Pickel says. “He was like, ‘Your dreams of wanting to play in all these far away markets are awesome, but you cannot reach any of those goals until you start where you’re at and conquer your hometown first. Then, you branch outward from there.’”

With this being said, the band believes Indiana serves as a great home base for touring bands.

“Any cardinal direction, there are markets relatively close to us, which makes the touring aspect of what we’re trying to do way more realistic,” Pickel says. “After shows, I still constantly hear, ‘Man, it’s so awesome to see somebody from the Midwest actually making some moves here.’ That’s a big thing for us.”

Following their Feb. 1 headlining show at the Vogue, Dizgo will continue to build on their imprint with large shows in neighboring states.

As for a follow-up to 2019 album Deeper, Dizgo says they’re taking their time.

For a full listing of Dizgo’s upcoming tour dates, be sure to visit the band’s Facebook page.

A Radiant Conversation with Wolfi

Josh Kaufman Shows A Different Side with ’NDOXO’ Group

After releasing his R&B-oriented ‘NDOXO’ project in 2019, the seasoned Indy singer is set to perform the songs with a brand new live band.