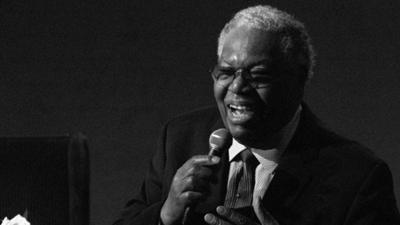 Everett Greene has been around the block a time or two.

With 70 years of singing experience, the bass baritone has performed at jazz festivals all across North America, while also doing some acting and voiceover work. Long before any of this, however, Greene could be heard singing on the city’s historic Indiana Avenue in the 1950s.

Still singing today, Greene graciously took time to chat with writer Seth Johnson about his experiences on the Avenue.

SETH JOHNSON: Tell me about your first introduction to Indiana Avenue. What was it like? What were your thoughts when you first discovered it?

EVERETT GREENE: My first introduction was in 1954. I had just come home from Korea. I came here to visit my mom when I got home, and she took me down to The Cotton Club and to George’s. I was really impressed with the people and the music that was going on. I was impressed with the Avenue having so many places to play in such a small area, and all of them had good musicians in ‘em.

When I got discharged, I had no intention of coming here to stay. I was only coming here on weekends. My mom convinced me to stay a little longer. One week turned to two, and then two turned to boredom. [laughs]

I’m from Washington D.C. originally, and I was a doo-woper all my life. My dad was a musician and had a band, so I knew so many of the old songs that he had played. When I finally settled down here, I joined a church choir. I worked with a lady and spread my range out some. I started hanging out at some of the places [on Indiana Avenue] after learning some music, and there were so many places to go at the time. I wasn’t working, per se, but I was learning my jazz craft.

My first jazz gig in the city was with Wes Montgomery’s trio at The Hub-Bub. They’d have what they called an “amateur night.” So that’s how I got started.

JOHNSON: From your experience, was the environment on Indiana Avenue pretty welcoming of new musicians?

GREENE: They had absolutely no problem with you, if you could play or not. There was one musician that would come to the jam sessions, and he’d play the alto saxophone. He was learning the horn, and the guys would all go, “Here comes Claude, here comes Claude.” But they’d let him play!

Later on in life, I happened to be in California. I was driving from Los Angeles inland, and I heard a saxophone solo. When it was over, a guy said, “Okay, that was Claude Bartee.” And I said, “Wow! I can’t believe this is the guy that nobody wanted to play with.” But that’s how you learned. Going, sitting in, and learning the music.

But the guys were all welcoming. If you wanted to come play, you’d always be welcome to come and sit in. If they liked you a lot, you got a chance to sit in a lot.

JOHNSON: You said a lot of musicians would come to Indiana Avenue just to hang out. Can you elaborate more on that?

GREENE: Jack McDuff [came here]. You had never heard of Jack McDuff. Roland Kirk [came here]. You had never heard of Roland Kirk. Those guys would come here. There used to be an after-hours club called Missile Room just south of Indiana Avenue, and a lot of guys would just come through. They had heard about Wes. Some of the great guitar players and some of the great musicians would come and say, “I just want to hear this guy.”

Wes was my next-door neighbor for a long, long time. Our kids grew up together. Sometimes he would sit out on the porch, practicing and so forth. One day when he was out playing, I asked him if he knew, “Willow Weep for Me.” He said, “Ah yeah, I haven’t played that for a long time.” So now every time I hear his recording of it, I say, “I put that in his mind. I’m the reason he recorded that song.” [laughs]

JOHNSON: Where were some of your favorite places on the Avenue to go at that time?

GREENE: George’s Bar. The Cotton Club kind of closed up early. Al’s British Lounge was another popular place. The Red Keg was another place. All those places were on the Avenue, but there were other places. 40th Street Tavern had lots of jazz. Mr. B’s was on 30th and Northwestern. All of those clubs had really good musicians playing. You could just run from club to club to club and hear really good music all day long. A lot of the clubs I can’t remember the name of now. [laughs] It was almost unbelievable that there was so much good music going on here.

I dropped out of the scene in the early ’60s. The VFW had a talent hunt here, and I got involved in it. I was pursued by this company. They tried to get me to sign a contract. I had a good friend who was a disc jockey in the city that said, “It’s a good contract, but just wait until the competition is over. Then, you can go from there and see what you want to do.” Well, I was one of the finalists in the competition, and I won a recording contract from the same guy who’d been pursuing me for all these months. Having thought I read the contract already, I signed it. I didn’t realize it was altogether different.

I was so disillusioned that I just stayed away from the clubs for 10 years. That was in the early ’60s, and I wouldn’t go near the clubs. I actually started singing with a gospel group.

JOHNSON: Around what time did you get back involved again?

GREENE: Around 1975, I started getting involved again. I started getting back out and sitting in. I got a chance to really hone my craft. I learned my craft by working with different people. I’m not a schooled musician at all. I only had about six or seven years before I retired in ’82. Right away, I auditioned for a play in Chicago. It was an Off Broadway production, and that’s when I made all my wonderful connections with so many of the big-time guys.

I look at the experiences that I’ve had working with some of those guys, and it all stems from learning my craft on the Avenue. I got a chance to do so many things that I never would’ve done before.

JOHNSON: You said you learned so much from being on Indiana Avenue. Are there people who you specifically remember as being good teachers?

I tell people now…I’m not in a position to teach singing, but I do coach a few people. Like, how to approach a song, breath control, and things like that. These are the things that are going to give you longevity, if you do it the right way.

After 70 years of doing this…I started with a quartet when I was 15 years old. We had a policeman who was our manager, and he could get us into clubs. After carrying on all these years, I’m still able to do this in a high fashion, I’d like to say. I like to think I’d know when to quit.

Note: Writer Seth Johnson was connected to Everett Greene via NUVO reader Greg Reynolds, who emailed Johnson in response to his interview with Indianapolis Jazz author David Williams. If there are other individuals from Indiana Avenue that you’d like Seth to interview, please email him at sjohnson@nuvo.net or simply leave your recommendations in the comment section.

Discussing the Musical Legacy of Indiana Avenue with David Williams

Carrying the Torch: A Conversation on Indy Jazz Then and Now

A wide-ranging and expansive chat with bass baritone Everett Greene

An Interview with the Tucker Brothers

After the release of their latest album Two Parts, sibling sensations Joel and Nick Tucker reflect on their jazz pursuits in Indy.