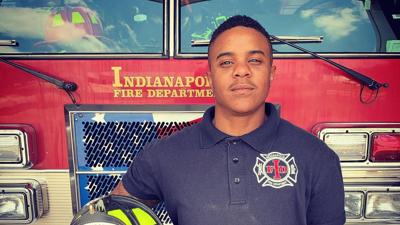 Crescent Ulmer doesn’t live the typical musician’s life. When he’s not up on stage with his band, the Indy native is out fighting fires as a member of the Indianapolis Fire Department.

“I have a career where I can also support my passion,” Ulmer says of his work/life balance. “It also benefits this other side of me that wants to help people. I had gotten that satisfaction through music, but it’s cool to have it in a twofold way with something that’s challenging and involves the community.”

Last month, Ulmer and his band the Tall Boys released a seven-song EP titled After All We’ve Been Through. On the heels of its release, Seth Johnson caught up with Ulmer, discussing how the Indy native got to this point in his life.

SETH JOHNSON: When did you first start playing music?

CRESCENT ULMER: I started playing at 15 years old. My next-door neighbor, who was also my best friend, was dating a guy who lived down the street, and he had an older sibling. They gave me their first guitar as my guitar. I remember I didn’t even know how to play it. I would just strum on it and sing. Finally, my mom got tired of it sounding terrible, so she signed me up for guitar lessons.

I took guitar lessons for maybe two months. The instructor actually taught me how to sing and play guitar. The second or third lesson, I came back to her and had learned all these songs on guitar from Ultimate Guitar tabs. I went back, played them for her, and she was like, “Holy crap. This is really good.” By the fifth lesson, I brought her a song that I’d written, and she was like, “You wrote that? Oh man. You need to keep doing this.”

From there, I stopped going to the lessons and just became obsessed. I’d be up until 5 in the morning before school playing songs or writing songs. In high school, I had a little setup rigged in the front room where the computer was. I’d record songs with a Rock Band microphone, and I started putting them up on Myspace. People started listening, and I’d get messages from people. Then, I just got hooked.

JOHNSON: Where did you play some of your first shows?

ULMER: My very first show was in Montpelier, Indiana, at a coffee shop. At that time, I didn’t even have real songs — I was just improvising and making up songs. After that, I did a string of Hot Topic shows — they had an entire network across the state. I graduated high school when I was 17, and I moved down to Bloomington with a buddy. After that, things were just nonstop.

JOHNSON: I know you have a longstanding friendship with Sirius Blvck. Who are some of the other people that helped you get more intertwined with the local music community?

JOHNSON: Shifting away from music for a bit, can you give me the back story on how you became a firefighter?

ULMER: At age 22, I moved away from Bloomington because the party side of that lifestyle just got to be really overwhelming, and I was pretty depressed. So I moved back in with my mom and just started working at Amazon.

I came home and told my mom that. She goes, “Honestly, I think that would be a really good job for you.” So I started googling how to become a firefighter and following through with it. I went out for IFD, got the job, and it just snowballed from there.

JOHNSON: What about your job as a firefighter do you love the most?

ULMER: As humans, I feel like our inclination is to be compassionate and helpful, but so often we’re not. This isn’t altruistic at all, and I completely take ownership of that … but it just feels good to be in a position where you can help other people. There’s just something about working with a group of people that just wants to help other people. … There's just no feeling like it.

JOHNSON: You also identify as transgender. I remember talking with you while that transition was happening, and you told me how it was affecting your singing voice. That being said, what overall impact did the transition have on your music career?

ULMER: That was probably the hardest thing that’s ever happened to me. I came out when I was 20, and had been using male pronouns for about four years before I decided to start HRT (hormone replacement therapy). The only reason why it even took me that long was because so much of my identity had been wrapped up in being a musician. My voice was the thing that people loved.

I’d look online and be like, “There’s gotta be other trans singers out there.” But there just weren’t very many. The only other trans musician I knew of decided not to take HRT because they didn’t want to lose their voice, so that really scared me. But a year and a half ago, it just got to a point where the depression around it all was so bad.

The first six months [of the transition] were really tough. It’s like puberty. Your voice is just so unpredictable on a day-to-day and week-to-week basis. When you finally think it’s leveled out, you have these cracks and peaks all of a sudden. It literally felt like when I first started singing all over again, and that headspace was really hard to be in. It’s a lot better now. I realized I just had to tune a half-step down. [laughs] I also just realized it’s the confidence you have in your voice.

My band was really supportive of me. It was tough, too, because the effects really started kicking in right as we started recording our EP. There would be these moments where we’d be in the studio. I’d go to sing a song that I’ve sung a thousand times, and they’d be like, “You don’t usually do this thing right here. Can you do that instead?” And I’d be like, “Guys. I literally can’t. I can’t hit that note.” It was really tough, but I’m glad we did it though. Battling through that and getting it done felt good.

JOHNSON: You mentioned that you’ve played many of these songs on the EP a thousand times. How old does that make some of them then?

ULMER: Except for Track 3 (“Like That”), all of the songs are anywhere from eight to 10 years old. They’re all songs that I’ve been playing since I was 17 or 18, and they’ve had so many different versions.

That’s why we called the EP After All We’ve Been Through. It was like, “I’m finally going to retire these songs. I finally have the band that’s playing them the way I’ve wanted to hear them.” They were songs I wrote when I was going through a lot and questioning my sexuality, my identity, my career choice, and my lifestyle. These songs have been through all those things, and they’ve been through different sounds with different bands. It was like, “After all we’ve been through, here it is. It’s done.”

Keeping It Real with Courtney Barnett

Sirius Blvck Is Back

After decades of existence, Footlite Musicals still has a knack for bringing people together through theater