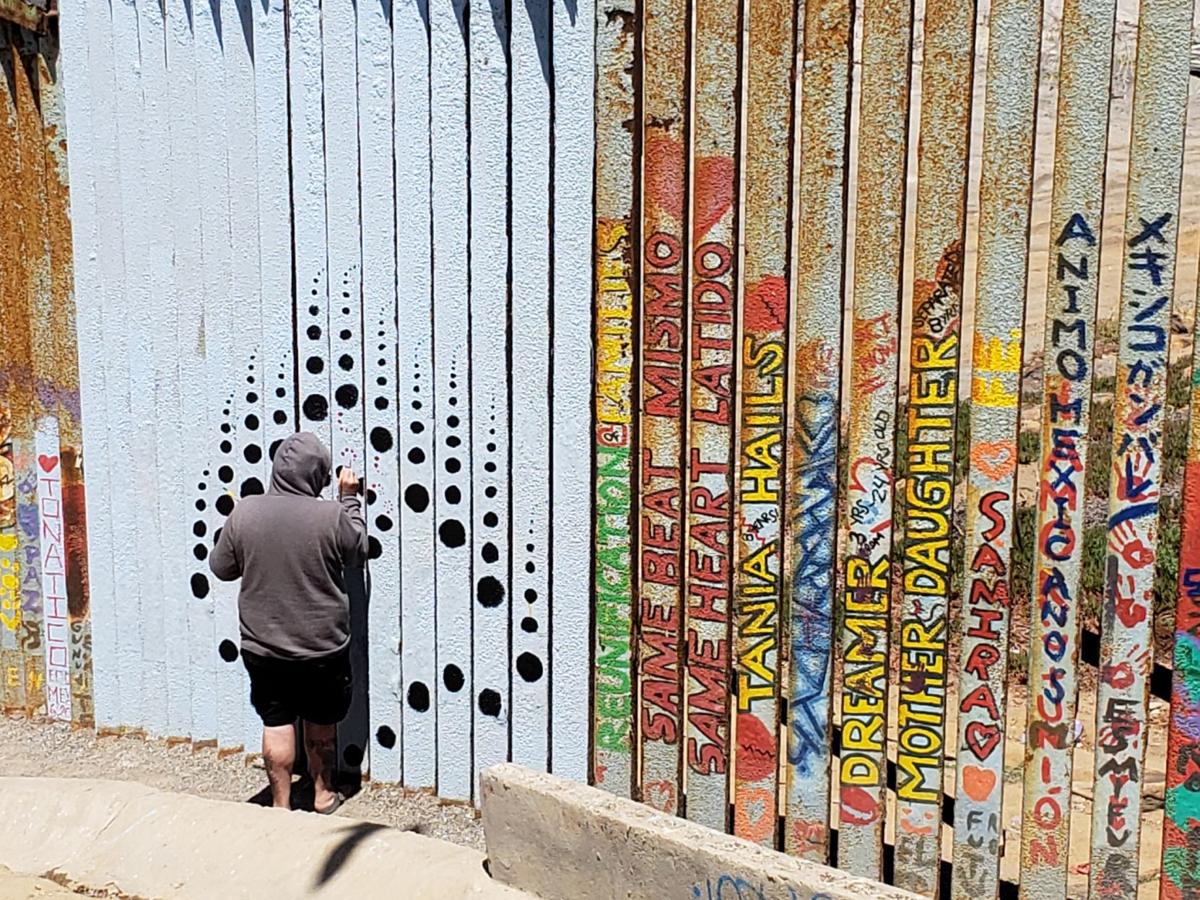 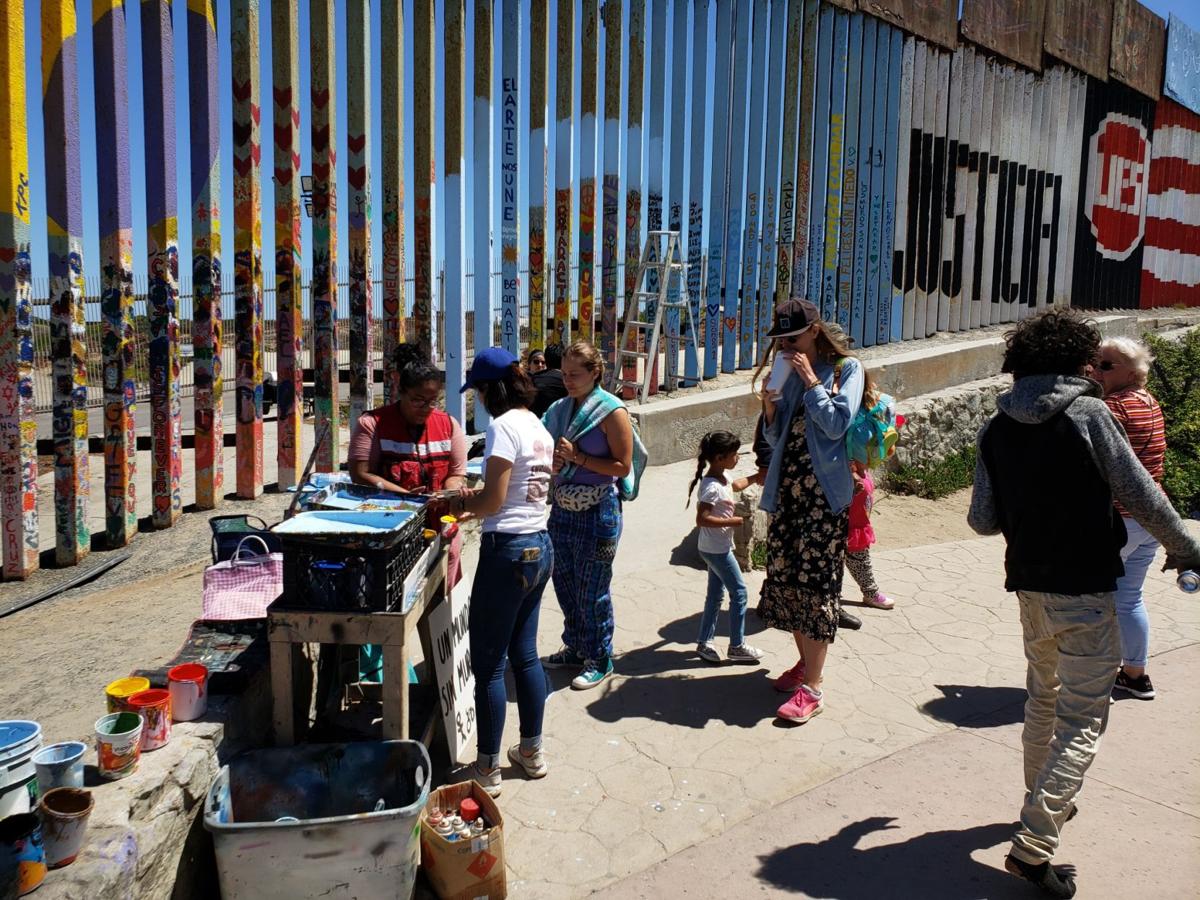 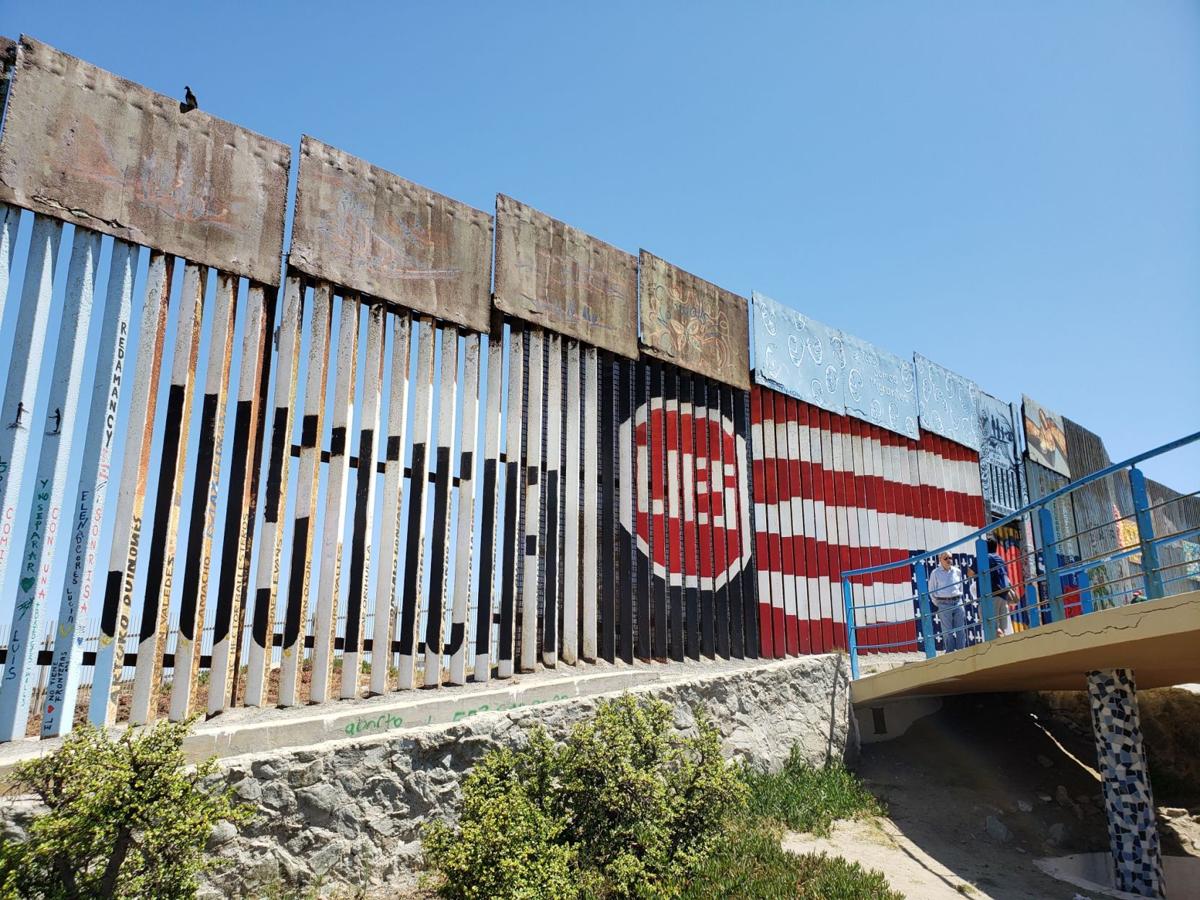 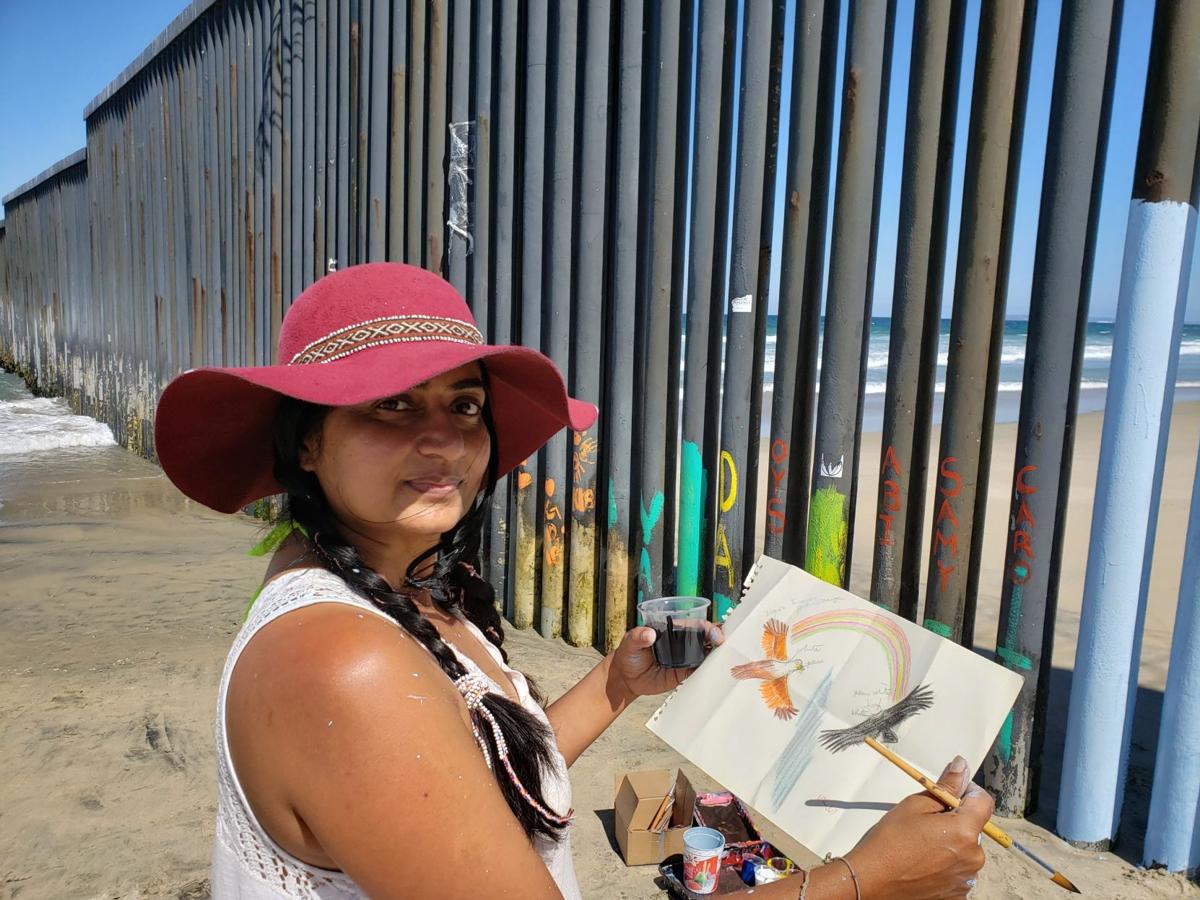 Bhavana Gesota with her design for the Brotherhood Mural 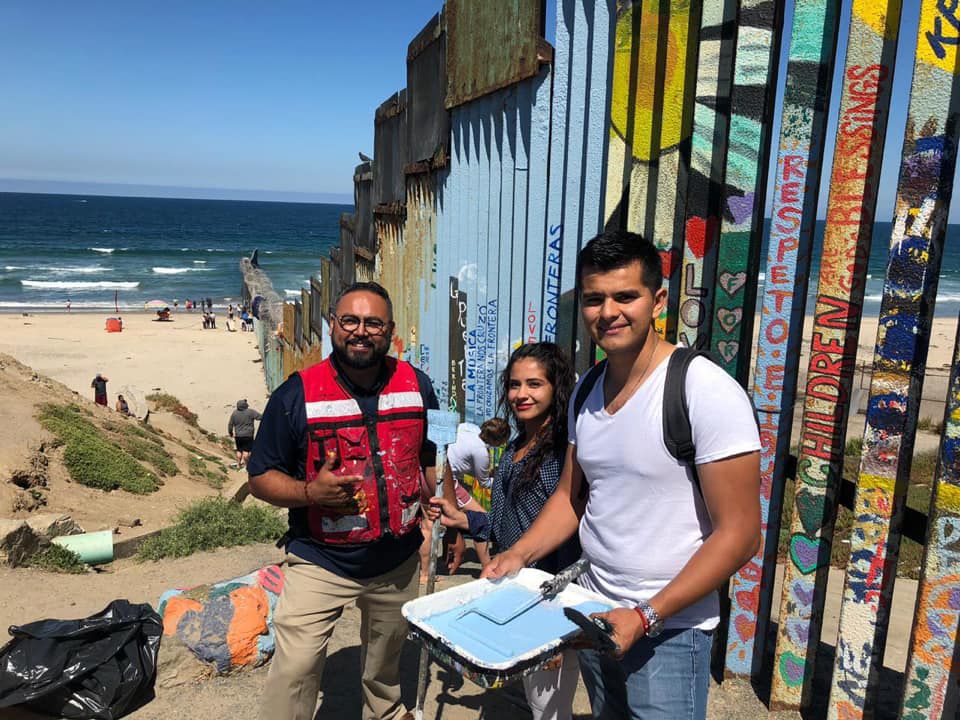 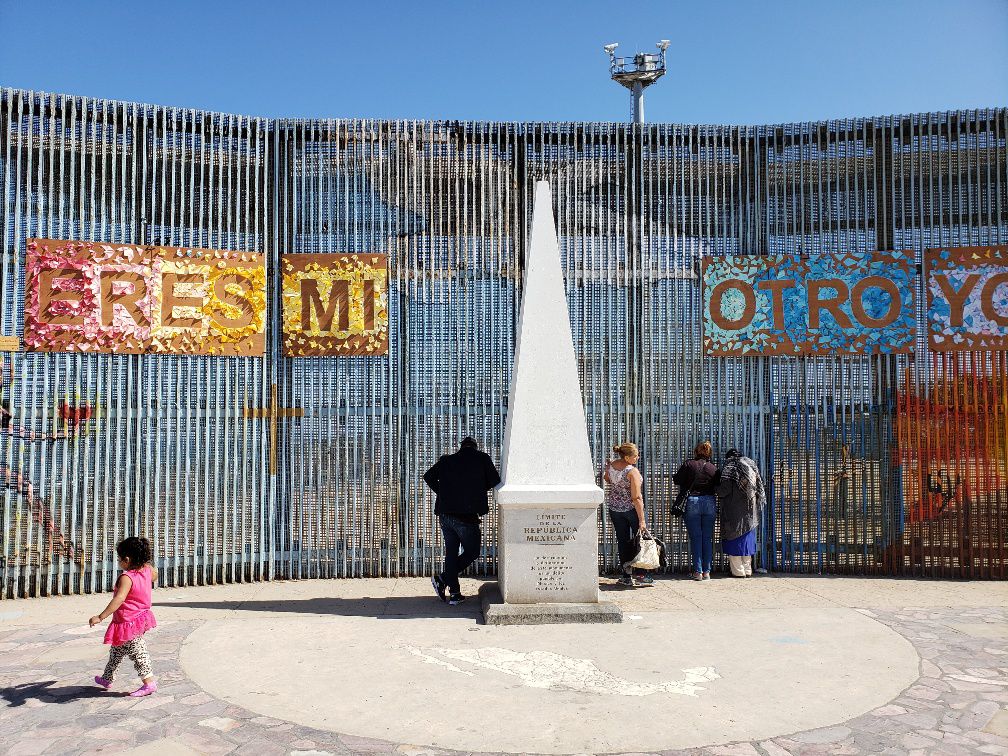 Mexican nationals waiting to talk to family members on the other side of the border. 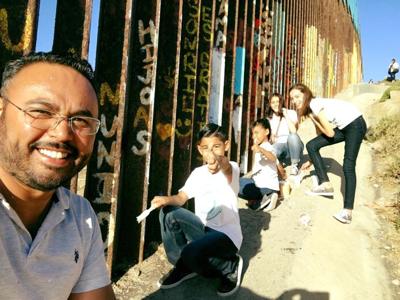 This Side has Dreams Too, a 16-minute documentary which focuses on an ongoing collaborative mural painting on the Mexican side of the border fence, will be screened at the Indy Shorts International Film Festival running July 25-28 as part of the series of short films "Beyond the Headlines."

This is the second annual year of the short film festival —  the Midwest’s largest — run by Heartland Film, which will take place at the Indianapolis Museum of Art at Newfields and other selected venues around the city.

The leader of this project is Mexican artist Enrique Chiu, who spent 14 years living on the U.S. side of the border, in San Diego. The artist, who exhibits his work internationally, currently lives in Tijuana, where he has a studio.

The morning of July 20 was the latest communal painting session at the beach in Tijuana, Mexico, attracting a dozen or so painters from as near as Tijuana and as far away as Norway. But these artists didn’t need to complete an application in order to participate in painting La Mural de la Hermandad (the Brotherhood mural). All they needed to do in order to paint this mile-long mural, the longest mural in the world, was simply show up.

With so many participants painting the mural —  over the past two-and-a-half years there have been some 4,000 —  the mural on the Mexican side resembles more of a tapestry of quilts than a singular work.

At 9:30 a.m., Chiu arrived with his two assistants, Iris Estrella, and Jocelin Ramos. They set up a station offering painters free paint and free use of brushes and rollers to paint the fence, which is composed of tightly staggered steel slats that stretch down to the beach and 30 meters into the ocean.

In front of the station, a painted sign read "Un Mundo Sin Muros" (a world without walls).

Chiu started la Mural de la Hermandad project on Election Day 2016, the election that brought Donald Trump to office. But Chiu is more interested in bringing people together than trading political barbs with the likes of Donald Trump.

“A lot of people get together and they enjoy the time to express themselves,” he said.

In the past two-and-a-half years, the project has attracted worldwide attention in the press, drawing journalists from all over the world to write and broadcast about it.

And La Mural de la Hermandad has become something of a cause to rally around as the issue of the border has become increasingly polarizing in the U.S.

On March 13, 2018, Donald Trump visited wall prototypes in San Diego, and he has been back repeatedly to inspect his “wall." (On that day they were within sight of Enrique Chiu and his volunteers, who were working on the Brotherhood Mural on the other side.)

In November 2018, Central Americans seeking refugee status came to the Tijuana beach and climbed the border fence as a protest. That same month, Customs and Borders Protection fired tear gas into Mexico at the nearby San Ysidro border crossing. CPB claimed afterwards that the purpose was to disperse rock throwers rather than the migrants trying to cross the border who were intermingled with them.

In reaction to such incidents, the Border Patrol and the U.S. military put concertina wire on top of and alongside the border fence at the Tijuana beach and stretching inland as well.

But none of this has dampened the enthusiasm of Chiu and the artists who heed his call to help out with the mural.

“A lot of people like musicians from Mexico ... known musicians and actors ... came to paint,” said Chiu. “We’re getting a lot of promotion about the liberty of expression, about the border and to promote human rights for the immigrants."

Chiu also said that there is another, longer format film in the works that will highlight the Brotherhood Mural.

The project has attracted, and continues to attract, artists from all over the world.

One of those artists is Indian-born itinerant artist Bhavana Gesota, who staked out the section of wall closest to the water to paint. She had originally come across the border for a pretty conventional reason: she had sought low-cost treatment for a dental infection.

“Just when I showed up to Tijuana to get it fixed, I found out about Enrique,” she said. “Somehow he showed up in my Facebook newsfeed. And that's a great project. I'm also an artist. So [I thought] I would like to  paint a little on the wall …. that's how it all happened.”

Walls, she says, are nothing new. “You know that the Berlin Wall, the Great Wall of China walls have been there throughout human history."

But that doesn’t mean they need to stand indefinitely.

Gesota points out that the Berlin Wall, which separated East and West Berlin for most of the Cold War, is no more. Scattered remnants of the wall function as an art gallery.

And, while the walls are still standing, seeing all the beautiful imagery on the walls is a positive thing for immigrants approaching it, she said.

“For those who are trying to get across the border ... in the immediate moment it represents hope for a better life,” Gesota continued.

Another painter at the wall that day was multimedia artist Norman Sotolongo. He was painting the fence along with his niece Sophia, who resides in Norway. Sotolongo is very familiar with the wall, as he used to live within sight of it in Las Playas de Tijuana.

The section of fence that he and his niece were painting over had already been painted by other artists, but had been faded by salt in the air and seaspray.

Sotolongo wanted, he said, to create something of an optical illusion —  making the border fence seem to disappear. His sentiment seemed to both echo  and build on that of Gesota.

"I was feeling weird about painting over somebody else," he said. "And somebody's gonna come and paint over my masterpiece And that's also a good lesson of the impermanence of things. I mean, nothing lasts.”

Art in New Places: A Day Trip to Tijuana