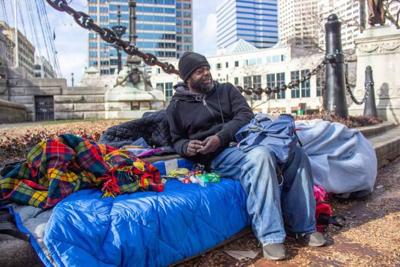 Chris Williams (pictured above) got kicked out of an Indianapolis homeless shelter years ago after, as he remembers it, staff said he was being disruptive. Williams said he was just standing up for himself because someone else was lying about him.

Williams was in and out of jail from 2001 to 2013 and said going to shelters was a familiar experience.

“I’d rather fight the weather out in my tent like I do,” Williams said as he sat on a ledge at the Soldiers and Sailors Monument downtown.

Even when the weather turns bitterly cold, Williams isn’t alone in choosing to stay outside instead of going to an emergency shelter for the night.

Melissa Burgess, program manager at Horizon House, knows who these people are. She and the rest of the Professional Blended Street Outreach Team hit the streets six days a week in the winter months to make sure people experiencing homelessness have food and the basic essentials to survive a cold surge.

It’s an opportunity to talk about coming inside, if only for the night, but many decline.

“[It’s] more common than you would probably think,” Burgess said.

It’s impossible to know exactly how many unsheltered homeless choose to stay outside, but the annual Point-in-Time Count offers a glimpse. When the count was taken Jan. 30, 2019, the temperature was 11 degrees below zero, and 105 people were unsheltered.

There were a total of 1,567 people counted, including those in emergency shelter, transitional housing and safe havens.

There are many reasons some unsheltered homeless choose to stay outside.

The overnight shelters in Indianapolis have religious or church affiliations, which can be unwelcoming for some, especially same-sex couples. Some have pets that wouldn’t be allowed inside, so they choose to remain with a companion rather than get temporary warmth.

There are also drug and alcohol policies that can make it difficult to get inside.

Shelters have a Winter Contingency Plan, coordinated by Wheeler Mission, which lasts from Nov. 1 to March 31. That means some of those rules are loosened during the colder months.

Instead of not being allowed into a shelter if someone is under the influence of drugs or alcohol, the standard becomes just making sure that person can handle him or herself.

Unlike in the past, the Winter Contingency Plan, which went into effect Nov. 1, doesn’t include any restrictions when it comes to weather this year.

It used to be that weather and temperature dictated if the plan was active, but that was confusing for many who needed shelter, according to Chelsea Haring-Cozzi, who leads the Coalition for Homelessness Intervention and Prevention.

Because the city doesn’t operate any shelters, it’s the de facto responsibility of Wheeler Mission — which has a men’s shelter and women’s and children shelter — to make sure all shelters are on the same page, especially around this time of year.

William Bumphus, director of the men’s shelter, said the number of people staying overnight hovers around 400 during the winter and gets up to around 500 in January and February.

Wheeler Mission is a non-denominational Christian organization, and Bumphus admits there was a “Bible thumper” mentality in the past but said that has gotten better over the last four or five years.

For example, Bumphus said addiction and recovery services aren’t religious anymore. Still, those who are in the shelter during chapel time have to attend or can avoid it by going outside.

The religious component can be off-putting, but Haring-Cozzi said there are still some people who just won’t go inside, regardless of who operates the shelter.

Williams, 48, is one of those people. He has a tent behind the Marion County Jail downtown and said he doesn’t feel tempted, even on the coldest nights, to get into an emergency shelter.

Williams said people who criticize that decision don’t understand what it’s like to experience homelessness, especially for such a long period of time.

“People don’t realize they’re one paycheck from being right where I’m at now,” he said. “So when they think they’re better than we are, tell them I’ve got a backpack and a tent. I’ll give it to them on discount when they come.”