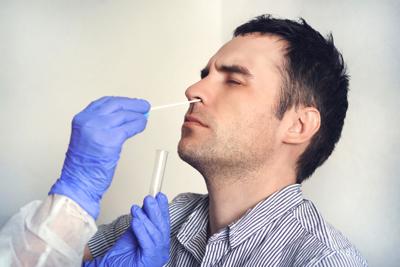 Beginning next week, any Hoosier who wants a test for COVID-19 will be able to get tested at one of the state’s OptumServe or drive-through testing sites.

“I think a big part of that is the peace of mind,” Box said about the new testing policy. “Those individuals who have really been concerned all along and are just not going to be comfortable until they are able to test themselves and know they are normal, or negative.”

Kristina Box. commissioner of the Indiana State Department of Health, described how COVID-19 testing will be available to all Hoosiers beginning next week. TheStatehouseFile.com

In addition to the expanded testing, it was announced that the health department has started providing zip code-level data on how the novel coronavirus is spreading and that the Bureau of Motor Vehicles will open for walk-in customers for the first time since March.

The gradual reopening of business and other activities continues as new COVID-19 cases and deaths are reported. Friday, the health department reported that 452 more Hoosiers have tested positive for COVID-19, bringing the total number of confirmed cases to 39,146. An additional 16 Hoosiers have died from the virus, totaling 2,214.

Until Box announced the change in testing protocols, only individuals with COVID-19 symptoms and those in at-risk categories, including people over the age of 65 or with underlying health conditions, were able to be tested without a doctor’s order.

Starting Monday, all Hoosiers, including children under the age of 12, can now be tested, including individuals who work in Indiana but live in a different state, because of the improved testing capacity, Box said. However, out-of-state workers will need an appointment for testing.

As testing increases, Hoosiers will now be able to get a more detailed view of where COVID-19 cases are concentrated. The health department’s website will now include a map breaking down positive test counts by zip codes, Box said, providing information that will help Hoosiers better understand where cases are occurring and who is being affected.

Box also said that the numbers will help officials guide where they put testing sites, which could help develop strategies to reduce the spread of the highly contagious virus.

The data is limited because if there are fewer than five cases in a zip code or a zip code has a population below 1,500 people, the counts will be suppressed, Box added. She cautioned that zip codes often cross county lines, so the counts will not align with those in the county map.

As the spread of the virus has gotten under control and the state moves into Stage 4 of the reopening plan allowing larger gatherings and businesses like movie theaters and bars to reopen, the BMV is relaxing its strict appointment-only policy and will start taking walk-in customers.

BMV Commissioner Peter Lacy said that every available appointment that the BMV was able to put on their system had been taken. The number of appointments offered each day will be reduced to help serve walk-in customers.

He also said that branches will return to normal operating hours starting next week after having been operating on an extended six-day week since the beginning of the national health emergency. Changes have been made to branches to ensure that social distancing guidelines can be followed.

Driving knowledge exams will be allowed in the branches, but driving tests will not start until early July, when the scheduled appointments that were cancelled in March will resume.