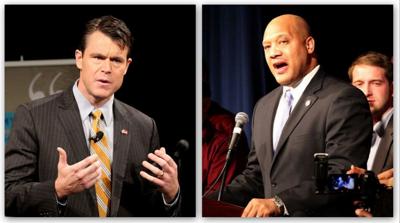 Democratic lawmakers from across the Midwest are calling on the U.S. Senate to pass a law they said is the most effective approach to reforming American police culture currently available.

The representatives, including U.S. Rep. André Carson, D-Indiana, gathered on Zoom Friday to highlight the pending George Floyd Justice in Policing Act. The law recently passed out of the U.S. House with bipartisan support, the representatives said, but it has stalled in the Senate. Republicans in the upper chamber have crafted a separate bill House Democrats say offers only recommendations rather than detailed changes.

“Policing needs to be reformed, and even reimagined,” Carson said as he and Democratic colleagues from Michigan, Illinois and Missouri argued why the George Floyd Act needs to move forward.

The legislation was named in honor of George Floyd, an unarmed Black man who was killed after a Minneapolis police officer pressed his knee to the back of Floyd’s neck for almost nine minutes when arresting Floyd on suspicion of using a counterfeit bill. Protests erupted around the country in the days and weeks following Floyd’s death, prompting policymakers to revisit how to hold law enforcement officers accountable for using excessive force — particularly against Black people, who protestors argue are targeted more aggressively by police than others.

If passed, the George Floyd Act would touch on multiple areas in policing. For one, it would ban police departments from using controversial chokeholds and similar force when restraining suspects in arrests. The act also bans officers from using no-knock warrants and requires departments to use body cameras and change how they train officers, such as by mandating training on discriminatory racial and religious profiling.

In the virtual conversation Friday, Carson reflected on his own experiences in describing why America needs a law like the George Floyd Act. As a Black man, Carson said he was a victim of racial and religious profiling during a past arrest. But he also cited his experience in law enforcement as a former officer for the Indiana State Excise Police and the Indiana Department of Homeland Security and said he knows firsthand the problems that need to be corrected in policing.

“There are plenty of wonderful, wonderful police officers who care deeply about their communities and who have the best of intentions,” Carson said. “But too many officers are motivated by racism and unchecked bigotry.”

While their Republican counterparts have offered alternative suggested reforms, the representatives said those alternatives are not enough compared to the George Floyd Act. That includes a recent executive order from President Donald Trump that calls for the creation of a database to better track officers with a history of misconduct and other reforms. Some have criticized Trump’s order, however, for not addressing racism as an underlying reason behind police misconduct and because it’s not as binding as a law.

“That’s an executive order,” said U.S. Rep. Brenda Lawrence, D-Michigan. “What the streets are calling for is transformational change that requires a law.”

The Senate Republicans’ police reform bill is called the JUSTICE Act. Unlike the House version, the Senate proposal does not mandate a ban on chokeholds, for example. The JUSTICE Act also doesn’t address qualified immunity, a legal process that can shield police officers from being held accountable for misconduct.

The Senate itself has yet to vote on the JUSTICE Act, U.S. Sen. Todd Young, R-Indiana, wrote in an op-ed for the Indianapolis Recorder Friday that outlined his disappointment with colleagues he said have stalled needed discussions about police accountability.

“I co-sponsored Sen. Tim Scott’s JUSTICE Act, but partisan politics kept it from even being debated publicly, much less voted on,” Young wrote.