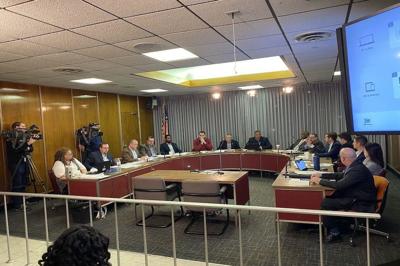 Indianapolis City-County Council member Leroy Robinson laid out a plan that includes new proposals, policy changes and improving communication over the next year.

Robinson told the Recorder of his plans about a week after Democrats on the Public Safety and Criminal Justice Committee rejected a Republican-backed proposal that would have created a commission to study violent crime and its disparate impact on African Americans.

Robinson, a Democrat who represents District 1, is the chairman of that committee.

Robinson will introduce three proposals as early as the next committee meeting Feb. 26, which will be at 5:30 p.m. at the Fay Biccard Glick Neighborhood Center, 2990 W. 71st St. Robinson said Marion County Prosecutor Ryan Mears and Indianapolis Metropolitan Police Department (IMPD) Chief Randal Taylor will be there.

One proposal would create a “super-utilizer data system,” which would show exactly which people are using the criminal justice system — courts, jail, arrests, etc. — at a high rate. Robinson said it’s difficult to know who those people, known as super-utilizers, are right now.

“Once we do that,” he said, “we can get that person some help and some assistance on how to stay out of the system.”

A second proposal would amend the focus of the Community Crime Prevention Grant Program, which the council allocates annually. Robinson said the $3 million awarded to organizations will be used for violence reduction instead and will address issues such as trauma associated with violent crime.

A third proposal would create a juvenile justice task force to focus on reforms specific to juveniles.

Robinson said each council member will work with criminal justice agencies to create a public safety plan specific to their district, since a blanket plan may work for some districts but not others.

Robinson said each district would get the same amount of money, regardless of how much crime and violence actually happens in each district, but added the proposal could be changed to make it so districts that need more resources would get more money.

He declined to say how much money would be dedicated to these plans.

There will be a bigger focus on hearing from “experts” in criminal justice, including those in the community who have been impacted by violence, according to Robinson.

Officials from agencies such as IMPD and the prosecutor’s office have been asked to pull data relevant to disparities in criminal justice and figure out what policies they can enact to “balance things out,” Robinson said.

Robinson said the committee will work with criminal justice agencies to hold all-day events around the city, where there will be resources for people who need help getting their driver’s license reinstated and getting their criminal record expunged.

Robinson said there will be more details about those events at the Feb. 26 committee meeting.

The Marion County Criminal Justice Planning Council — which is supposed to study and make recommendations regarding law enforcement and criminal justice — has monthly public meetings and will also have “experts” come talk to members about how to reform the criminal justice system, Robinson said.

Robinson had released statements that included some of the plans, but not everything was known.

“We’re moving forward,” he said in the interview. “We have an agenda. We’ll work with all of the agencies and all of the stakeholders in the community to address these concerns. This is not just a council-led initiative. This is something that involves all stakeholders that are interested in reducing violent crime.”

The plans are the result of a years-long effort on the part of councilors to better understand how criminal justice reform should look.

That included feedback from the Criminal Justice Reform Task Force and meetings with the Government Alliance on Race and Equity, which took place up to December of last year.

The Republican-backed proposal Democrats turned down at the committee meeting would have established a commission to review the status of the city’s short- and long-term response to violent crime, recommend proposals and gather information to recommend policy changes.

The proposal failed, 8-3, along party lines.

Republicans, along with the Indianapolis Fraternal Order of Police (FOP) and two Democratic councilors, announced a new “citizen-driven group” that will bring together residents, stakeholders and neighborhood associations to figure out solutions to violent crime.

Robinson said he has “no qualms” with what the group is doing.

These developments coincide with a quadruple homicide that happened Feb. 5 shortly after the committee meeting.

Democrats’ main rebuttal to Republicans at the committee meeting was that it’s time for action, but that sparked criticism because the public didn’t know what that action would be.

Robinson said the plans he’s laid out is the action.