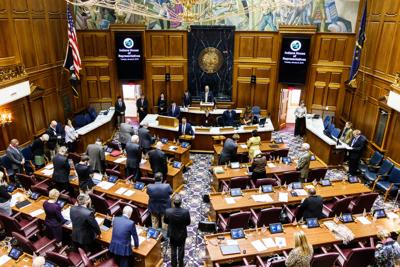 Lawmakers dealt with legislation covering syringe exchange programs, students with disabilities and coal plant closures as the General Assembly ended its next-to-last week of the 2020 session:

What it does: HB 1182 started out as a bill to modernize how state law refers to HIV, replacing the label “AIDS” with human immunodeficiency virus (HIV) and the word “carrier” with “individual with a communicable disease.” But it was amended to extend the state’s syringe exchange program to July 1, 2022, rather than current end date of July 1, 2021.

What happened: The House voted 78-7 on Thursday to concur with the changes made in the Senate, including the one-year extension of the syringe exchange program. Six of the nine programs in the state, including populous ones such as Marion and Allen County, would have expired in 2021 without the change.

What’s next: HB 1182 will now go to Gov. Eric Holcomb for his decision on whether to sign it in to law.

What it does: HB 1341 requires the State Advisory Council on the Education of Children with Disabilities to develop a plan to inform certain students about resources and opportunities. Those include students who received a certificate of completion or other non-diploma certificate of recognition, as well as students who had an individualized education program, service plan or choice scholarship education plan and withdrew from school when they were at least age 16.

What happened: The House voted 89-0 Thursday to concur with changes made in the Senate. One Senate amendment changed the eligibility to students who received the certificate of completion or other non-diploma after Dec. 31, 2003, rather than 1999 as the bill originally stated. in the bill from 1999 to 2003 for students with disabilities. Another amendment added requires the advisory council to provide its plan to the General Assembly by Oct. 1.

What’s next: HB 1341 will now go to Gov. Eric Holcomb for his review and possible signature into law.

What it does: HB 1414 requires the state’s utilities to notify the Indiana Utility Regulatory Commission if they plan to close an energy-producing plant. It could pause the closure of coal plants until Dec. 31 of this year while the 21st Century Energy Task Force finishes its work.

What happened: The bill was heard in a conference committee Thursday where the differences between the House and Senate versions were discussed. The Senate weakened the bill by removing language that would have required a hearing at the IURC before closing a plant. At the joint House-Senate conference committee multiple people from the coal industry to energy groups testified for and against the bill.

Jesse Kharbanda, executive director of the Hoosier Environmental Council, said Indiana should look to help from states like Iowa that have successfully integrated renewable energy into the overall electricity grid. But Rep. Alan Morrison, R-Brazil, dismissed the idea by saying we shouldn’t make comparisons to states with different geographical features from Indiana. When Kharbanda tried to respond, he was shut down by the committee chair and author of the bill, Rep. Ed Soliday, R-Valparaiso, who said, “No, no, no, Mr. Kharbanda, no.”

What’s next: The conference committee will continue its work on HB 1414.

Lacey Watt and Victoria Ratliff contributed to this report. They are reporters for TheStatehouseFile.com, a news website powered by Franklin College journalism students.