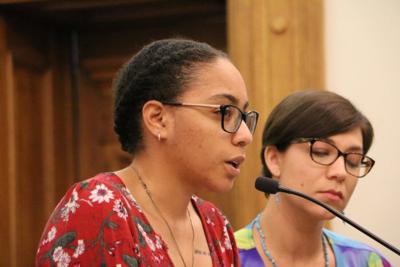 Photo by Brandon Barger, Sa’Ra Skipper speaks about her struggles

A legislative study committee heard from Type 1 diabetics who described their daily struggles with pharmaceutical companies, insurance agencies and the healthcare system to get the insulin they need to stay alive.

Sa’Ra Skipper testified that she lived off samples and donations of insulin that she shared with her younger sister, also a Type 1 diabetic, for years.

Sa’Ra Skipper spokes about her struggles to afford insulin for her Type 1 diabetes while Taya Keeler listened nearby during the Interim Study Committee on Public Health, Behavioral Health, and Human Services meeting Tuesday. Photo by Brandon Barger, TheStatehouseFile.com

“It’s so frustrating to me the person who is actually working a full-time job with insurance and I am not able to afford what I need because it’s a thousand dollars and I know it’s not my fault,” Skipper said. “I feel like I am being failed.”

Skipper was among the witnesses who testified Wednesday before the Interim Study Committee on Public Health, Behavioral Health and Human Services, which is examining rising prescription drug costs and what lawmakers can do about it.

The committee also heard from lobbyists, pharmaceutical companies and doctors as well as patients who shared testimony and data to explain the rise in prescription medication prices, who gets that money and how it affects the people who need the drugs.

Executives from Indiana-based Eli Lilly and Company, a leading producer of insulin, talked about how they have programs designed to reduce overall costs of diabetes medications for their consumers.

The company has offered different programs such as automatic discounts, rebates and an out-of-pocket cap for Medicaid Part D consumers.

“This is an incredibly important topic for all of us,” said John Steel, senior director of Lilly Diabetes Corporate Affairs.  “We want to make sure that everyone who needs insulin has it.”

But these programs don’t reach as many consumers as Hope Charters would like. She is a Type 1 diabetic.

“We appreciate what Lily is trying to do but it’s almost like too little too late and it feels like such a PR move.” Charters said. “Like it takes five to seven dollars to manufacture and provide insulin why are they still charging like $135 for a half-priced vial.”

Charters has struggled with Type 1 diabetes since she was 15. Soon after she was diagnosed, her father lost his job and his insurance coverage. He had been injured on the job and could have fought for disability payments, but instead settled with the company so his daughter could get six more months of insurance coverage.

“For years, we had to beg clinics for free samples of two different types of insulins,” she wrote in a statement to the committee. “We did not qualify for any patient assistance programs through the pharmaceutical manufacturers. My mom had to ignore utility bills and rent occasionally in order to pay for my insulin when no free samples were available.”

Harry Rybolt is not only a Type 1 diabetic who struggles every day, but he lost his 39-year-old son, also a diabetic, in August because he was taking a “cheaper” option which put him into a diabetic coma which ultimately led to his death.

“This stuff has got to stop,” Rybolt said. “Something has got to be done where people who need it can get it no matter the cost because it is a fatal choice.”

The committee also heard from Colleen Becker, a policy specialist for the National Conference of State Legislatures, who gave examples of how other states are tackling the problem. Bills passed in 2019 in Louisiana, Maine and Minnesota have transparency requirements and language to ensure the best interest of clients is considered.

Also in attendance was Antonio Ciaccia, of 3 Axis Advisors, who conducted a study through the 46Brooklyn project to figure out why prescription medication prices were so high. 3 Axis Advisors is an Ohio consulting company that advises government and businesses on many issues, including prescription drug prices.

He also spoke about the issue of Pharmacy Benefit Managers (PBMs) and how the problem has resulted, in part, because from 75 percent of those enterprises are handled by three companies.

The lack of competition allows for them to raise prices and underpay pharmacies, Ciaccia said.

Rep. Robin Shackleford, D-Indianapolis, said in a news release after the meeting that she plans to push for legislation to control the cost of prescription medications, noting that drug costs rose nearly 58 percent in Indiana from 2012 to 2017.

“This is not a one-sided problem and we have to take into account the consumers, manufacturing companies, insurance plans, pharmacists, and pharmacy benefit managers when crafting policy changes,” she said.