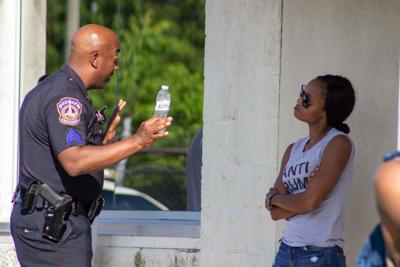 A protester and police officer talk off to the side of a demonstration at IMPD's Northwest District. (Photo/Tyler Fenwick)

When protesters first hit the streets in Indianapolis in late May and early June, their chants were the familiar ones.

And then came a new slogan, one that wasn’t difficult to memorize: “Defund the police!”

“Defund them, refund us!” has become a common chant that reverberates off of the buildings downtown.

Elected officials in some cities — such as Minneapolis, where George Floyd was killed by police — have pledged to take similar action, but there aren’t many details yet.

In Indianapolis, there appears to be at least some momentum behind the idea of cutting back on public safety funding from people who actually have the power to do that, even if it’s currently not the position held by the mayor and chief of police.

City-county councilor Ethan Evans, who represents District 4 on the northeast side, said there are some councilors who have been talking “behind the scenes” about how to “get things started,” but he declined to go into more detail.

“I’m not saying totally take away all funds, but we should be looking at ways to address these problems and shifting how we view our police,” said Evans, who is on the Public Safety and Criminal Justice Committee.

Leroy Robinson, who chairs the committee, did not respond to a request for comment.

Public safety and criminal justice combine to make up 60% of the city-county budget. The Indianapolis Metropolitan Police Department alone accounts for about $254 million, which is about 31% of the money for city departments and about 22% of the entire city-county budget.

The budget process begins in early August, when councilors will begin to consider priorities for the next city budget. Meetings may not be physically open to the public at that point because of the pandemic, but they will be available to the public in some capacity.

City-county council President Vop Osili said in an interview at a recent protest that “defund” is a big word.

“I don't think that's the word we want to use on that, because ‘defund’ means basically you take all the money away, and we know that we cannot do without our police force,” he said.

That’s the dilemma that quickly sprang up when “defund the police” became a louder, more sustained demand.

What does it mean? Depends on who you ask.

Patrisse Cullors, one of the co-founders of the Black Lives Matter movement, said in a recent interview on the podcast “Deconstructed” her goal involves “decreasing the police’s ability to be in contact with Black people.”

Cullors, a self-described police and prison abolitionist, said reforms that don’t do that simply aren’t effective because they do nothing to change the structural racism within police departments.

Abolishing policing as it is in the United States seems to be a more popular goal now than in 2014 — when Michael Brown Jr. was killed by police in Ferguson, Missouri, which launched the Black Lives Matter movement — but that also doesn’t appear to be the immediate goal of many who say they want to “defund” police.

What most people seem to mean when they call for the defunding of police is a version of the following: Cut back spending on police departments drastically and redistribute that money to other resources and departments while also limiting the role of police so armed officers don’t show up to situations that don’t require violent intervention.

It’s not as catchy of a slogan as “defund the police.”

Tom Stucky, executive associate dean at the School of Public and Environmental Affairs at IUPUI, said research has made it clear that spending more money on criminal justice doesn’t lead to a safer society.

Using the analogy that an ounce of prevention is worth a pound of cure, Stucky said there are issues such as mental health and food insecurity that are underlying factors in crime, and police just aren’t well equipped to deal with those problems.

“We have made the criminal justice system our default response to a number of social problems that we don’t handle well otherwise,” he said.

Part of Stucky’s possible reimagining of public safety is a system in which people who aren’t necessarily sworn police officers respond to a burglary, for example, that’s called in the day after it happens.

It’s very unlikely there would need to be an arrest made at the scene in that scenario, so the person responding makes the report and leaves police free to respond to situations where their presence could actually be useful: an armed robbery in progress, for example.

Beryl Cohen, executive director of the National Association of Social Workers Indiana Chapter, said it’s not enough to simply move in a direction where social workers and other service providers are the ones responding to non-violent scenes, though.

Are service providers part of the police department? Do they come through a partnership with a local clinic? Is there an armed officer nearby in case of an emergency?

“If there was one, easy solution to this whole problem, we would’ve done it a long time ago,” Cohen said.

IMPD already does something similar to what people are asking for with the Mobile Crisis Assistance Team, or MCAT.

The program — which started as a pilot in the East District — initially involved teams of officers, paramedics and clinicians who focus on calls regarding mental health and addiction in order to keep people out of jails and emergency rooms.

Indianapolis EMS pulled out of the partnership in late 2018, but the program continues with officers and clinicians working together.

The Center for Criminal Justice Research at the Indiana University Public Policy Institute evaluated the pilot program in 2017 and found MCAT transported a person to jail less than 2% of the time and that 85% of IMPD East District officers surveyed said the program was a good additional resource in responding to emergencies.

Researchers at the Public Policy Institute are currently conducting another study to evaluate its effectiveness.

City officials have also pointed to the Assessment and Intervention Center (AIC), which will divert non-violent, low-level offenders from jail and connect them with treatment and wraparound services. The AIC is scheduled to open later this year at the Community Justice Campus.

But when it comes to actually taking money from IMPD and redistributing it elsewhere, Mayor Joe Hogsett isn’t on board yet.

Hogsett recently announced a partnership with the Criminal Justice Lab at the New York University School of Law to “chart a new path” for public safety in Indianapolis.

Hogsett said “nothing is off limits” when the time comes for policy recommendations. When asked specifically about the possibility of scaling back funding in public safety, he said that’s “putting the cart before the horse.”

“That certainly would not be my recommendation,” he said, while noting he understands “defund” doesn’t necessarily mean to abolish.