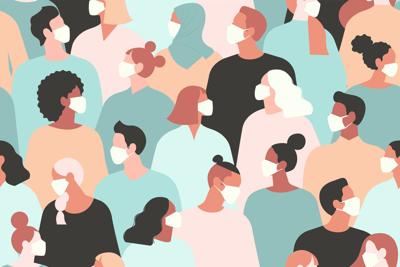 U.S. and Worldwide Numbers As of Tuesday Morning, From John Hopkins University:

BREAKING: As reported by Emily Cochran of the New York Times, the Senate on Tuesday evening approved extending the application period for a relief program for small businesses, granting five additional weeks for the remaining money left in the program to be spent.

Less than four hours before the Paycheck Protection Program was scheduled to close with $130 billion still available for loans to small businesses seeking to maintain their payrolls, the Senate approved extending the application period and allowing small businesses to receive aid until Aug. 8.

As reported by Fadel Allassan from Axios: Anthony Fauci testified to a Senate committee Tuesday that he would "not be surprised" if the U.S. begins reporting as many as 100,000 new coronavirus cases per day, adding, "I'm very concerned and not satisfied with what's going on because we're going in the wrong direction."

The big picture: The country is currently seeing about 40,000 new cases daily, but that number will rise rapidly "if this does not turn around," Fauci said. He added that the outbreaks in various parts of the country put "the entire country at risk" and "clearly we don't have this under control."

Earlier in the hearing, Fauci warned that some states are "skipping over" checkpoints in the federal reopening guidelines and that this is leading to new hotspots in states like Texas, Florida and Arizona.

What he's saying: "I can't make an accurate prediction, but it is going to be very disturbing, I will guarantee you that, because when you have an outbreak in one part of the country even though in other parts of the country they're doing well, they are vulnerable. I made that point very clearly last week at a press conference. We can't just focus on those areas that are having the surge. It puts the entire country at risk."

Alexander Calls For End Of Mask Usage As Political Issue

What’s new: In an attempt to stem the tide of politicization of wearing a mask, Senate Health Committee Chairman Lamar Alexander (R-Tenn.) urged Americans to stop politicizing the use of masks to slow the spread of COVID-19, adding that it would help if President Trump wore one himself once in a while.

“Unfortunately this simple lifesaving practice has become part of a political debate that says: If you're for Trump, you don't wear a mask. If you're against Trump, you do,” Alexander said Tuesday during a hearing focused on COVID-19.

“That is why I have suggested the president should occasionally wear a mask even though there are not many occasions when it is necessary for him to do so. The president has millions of admirers. They would follow his lead. It would help end this political debate. The stakes are too high for it to continue.”

Background: The Centers for Disease Control and Prevention recommends the use of masks or cloth facial coverings when it is not possible to stay at least 6 feet away from others. Studies have shown the use of face coverings can slow the spread of COVID-19 because it prevents coronavirus carriers who do not know they have the disease — because they’re not showing symptoms — from spreading it to others.

However, the issue has become political in the U.S.

Polls show Democrats are more likely than Republicans to wear masks in public, and Republican governors have been more hesitant than Democratic ones to issue statewide mask mandates, including in states experiencing surges in cases like Texas, Arizona and Florida.

In recent days: Senate Republicans have begun to advocate the use of masks. Yesterday, Majority Leader Mitch McConnell said this on the Senate floor: “We must have no stigma — none — about wearing masks when we leave our homes and come near other people. Wearing simple face coverings is not about protecting ourselves. It is about protecting everyone we encounter.”

With coronavirus cases surging and no end in sight, schools and daycare centers may not fully reopen in the fall, triggering a massive child care crisis for millions of American workers, Axios' Erica Pandey writes.

School districts are starting to release their plans for the fall. Many, including those in Seattle, Omaha and Fairfax County, Va., have come up with hybrid online and in-person schedules.

At the same time, more states are reopening — and calling employees back to work.

A solution: Firms can build in flexibility for working parents by implementing shorter work days or weeks.

Treasury has released an updated report on second-round funding data for the Paycheck Protection Program (PPP). To date, over 4.7 million loans have been made for more than $518 billion. Over $134 billion remains available for use. The deadline to apply for a PPP loan is today.

The full report can be found here.

On Monday, Treasury Secretary Mnuchin issued a statement on the launch of the Primary Market Corporate Credit Facility (PMCCF).

The facility is now fully operational and is available to provide bond financing to U.S. companies with investment-grade debt ratings, including those that were investment grade as of March 22, 2020.

On Monday, the Federal Reserve released a new term sheet for the PMCCF. The facility will serve as an effort to support market liquidity through the availability of credit for large employers. Pricing will be issuer-specific and rely on market conditions.

A press release from the Fed, the PMCCF term sheet, and an FAQ are here.

On Monday, the Department of Health and Human Services (HHS) announced an agreement to secure large amounts of remdesivir for the U.S. through September.

More than 500,000 treatment courses of the drug have been purchased through September for American use. HHS will allocate shipments of the drug to state and territorial health departments based on COVID-19 hospital burden. Shipments will occur every two weeks.

On Monday, the FDA approved an emergency use authorization for an antibody test produced by Danaher. Beckman Coulter, a unit of Danaher, has shipped tests to 400 hospitals across the country and will produce more than 30 million tests a month. The test has a specificity rate of 99.6 percent and a 100 percent sensitivity rate.

The University of Washington’s Institute for Health Metrics and Evaluation (IHME) has lowered its projection of how many people are likely to die from COVID-19 in the U.S by October 1. The model now projects roughly 175,000 Americans will die from the virus by October, slightly down from its projection of about 180,000 last week. The model says that number could be reduced to 150,000 if people wear facemasks at all times in public.

A new policy report from Ball State University says COVID-19 has damaged Indiana’s tourism and hospitality sectors to the point where strong government intervention is necessary.

According to the report, the sectors have come to a near standstill during the first half of the year.

“The Recovery After COVID-19: Travel, Tourism, and Hospitality Industries of Indiana,” report by Craig Webster and Sotiris Hji-Avgoustis, management faculty in Ball State’s Miller College of Business cites the World Travel & Tourism Council’s findings that the pandemic caused over 100 million tourism-related job losses across the globe. “The estimates for the losses of jobs in the sector are substantial for many reasons,” stated Webster. “There is little to be done in terms of moving to virtual tourism that can benefit the labor that works in bricks and mortar tourism and hospitality establishments. So, while software engineers, accountants, and university professors can easily move their operations to their home offices, many in tourism and hospitality do not have that option."

The research cites 2018 data on tourism, which suggests that one in 23 Hoosier workers is employed through the various hospitality industries. Ball State says the same data also shows that the Indiana tourism industry directly supported more than 152,000 jobs in Indiana in 2018.

According to the report, while the state is not in a major hub of international tourism, Indiana’s travel, tourism, and hospitality industries are important to the economy and provide significant revenues.

The report suggests the state could take the lead on a number of initiatives, including the funding of market research for the industry, coordination of policies across the state for the industry, training workers and encouraging workers to return to the industry, and developing a state-level recovery strategy. Webster says the pandemic will likely have a lasting effect upon the government and the travel, tourism, and hospitality industries for years to come.

You can view the full report by clicking here. (Inside Indiana Business)

The mask order was due to expire Saturday. It requires face coverings for all people inside businesses and enclosed public spaces where social distancing of at least six feet can’t be maintained. Like the first order, it exempts people who can’t wear face coverings for health reasons but goes further by specifying examples of those conditions, including people with “respiratory conditions such as asthma and chronic obstructive lung disease; severe anxiety; autism; cerebral palsy; two years of age or younger.” The order also requires businesses to have hand sanitizer available at entrances for customers. (South Bend Tribune)