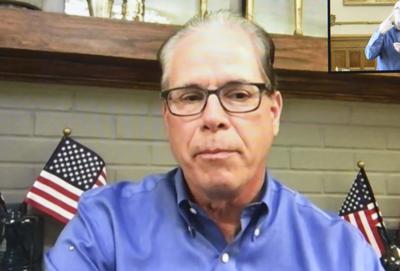 The pot of federal money helping individuals, businesses, hospitals and governments weather the COVID-19 pandemic may be running dry.

“When we get back, I think there will be very little done in terms of additional federal dollars, other than truly aimed at errors and omissions and some particularly hard hit sectors,” he said from where he has been in lockdown through the outbreak of COVID-19. Congress is expected to return to Washington on May 4.

This week, Congress passed the CARES 3.5 Act which will allocate $321 billion to the Paycheck Protection Program to help small businesses keep their workers on payroll. This money will supplement the $349 billion previously approved in the CARES Act.

The act will also provide $60 billion in economic disaster assistance, with $50 billion going to the Disaster Loans Program.

Braun shared the economic data after Dr. Kristina Box, the state health commissioner, provided her daily updated on COVID-19—656 new cases for a statewide total of 13,680 and 35 deaths, with 741 across Indiana.

As the daily numbers show slight decreases and the state begins to prepare to reopen the economy, the number of Hoosiers seeking unemployment is still on the rise.

Thursday, Commissioner of the Department of Workforce Development, Fred Payne, reported that while the weekly number of unemployment requests have declined, they are still triple the previous record. Overall, 515,000 Hoosiers have filed for unemployment over the past several weeks as the pandemic took hold.

Congress has acted swiftly to hold those hurt by the pandemic, which has resulted in schools, businesses and other activities being shut down to slow the spread of the virus. So far about $3 trillion has been allocated to help reduce the damage to the economy, including funds for an additional $600 weekly payment for individuals who collect unemployment.

The federal budget is beginning to see the impact of the expenditures.

Braun said that just in the past few weeks, the national debt has ballooned by $3 trillion, from the already $23 trillion debt. He said the next steps taken by Holcomb will be critical, since the relief from the federal government will be minimal.

“That’s why the next step from the feds is going to be meted out pretty carefully,” he said. “We have to be careful to that we don’t go over the tipping point when it comes to the economic damage.”

Holcomb has said the state’s economy will be restarted slowly as businesses put procedures in place to be sure employees and customers will be safe and there won’t be a resurgence of COVID-19. A first step in that process comes Monday—Holcomb signed an executive order Friday to allow health care providers and facilities to resume elective medical procedures.

Facilities, including hospitals, veterinarians and dentists, will only be allowed to resume provided they have appropriate amounts of personal protective equipment and consult recommendations developed by their medical associations or industries.

Later Friday, Holcomb announced that the Indiana Economic Development Corporation has secured commitments for more than 6.3 million pieces of personal protective equipment – up from 2.6 million last reported on April 13 – for hospitals, first responders, long-term care facilities and health care providers treating COVID-19 patients. To date, more than 1.17 million items have been delivered to the health department for distribution.

Meanwhile, state health officials will continue to provide guidance to hospitals, business and individuals as they navigate the changes brought about by the pandemic.

Some of that guidance included telling Hoosiers not to follow President Donald Trump’s suggestions that ingesting disinfectants could kill the virus in people.

Box said she has responding to questions about that “remedy” saying, “We have assured them that that’s not something we recommend.”

Holcomb referred to the president’s comment when asked whether he was serious about the disinfectant and he replied that he was just being sarcastic.

Braun, one of Trump’s staunchest supporters, said, “Sometimes when you’re not clear with how you say things and especially when you’re at a high level where people watch, it’s probably best not to venture into areas that you may not know a lot about.”

Victoria Ratliff is a reporter for TheStatehouseFile.com, a news website powered by Franklin College journalism students.