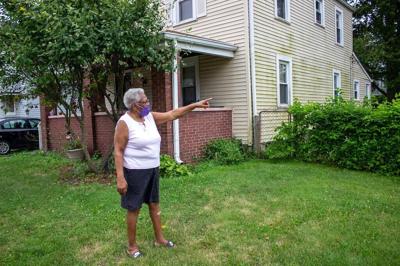 Don’t tell Pearl Carter she lives in the Monon16 neighborhood. That’s a ploy, she said, to attract new — mostly white — people and businesses.

“This is my block,” she said with a laugh.

Increasingly, though, it hasn’t been Carter’s block. It started when the Monon Lofts apartment buildings went up a few years ago. They stand tall on the other side of her backyard. Then there’s a newer Mexican restaurant and a coffee shop. White people love the trendy feel of the area, Carter said, plus the Monon Trail is right there.

Carter said she gets a letter in the mail at least once a week from developers offering to pay top dollar for her home. The same is true for her 103-year-old mother who lives across the street, along with other long time residents.

“We feel like we’re being smothered out,” she said.

Carter hopes this isn’t the beginning of something worse coming to her neighborhood. She still loves sitting on her porch and hosting porch parties. Everyone seems to have a dog, Carter said, and she watches people walk them to make sure they have a bag.

She’s glad people want to move into the area, but home prices are climbing — some new builds on Carter’s street are worth more than $200,000 — and the fabric of the community is changing.

“We’ve been gentrified,” she said.

A recent study from the National Community Reinvestment Coalition said the census tract where Carter lives is, in fact, “gentrified,” and it ranked Indianapolis No. 12 on a list of the most intensely gentrifying cities from 2013 to 2017.

People use their eyes and ears to judge if their neighborhood is being gentrified, and studies use complex methods and formulas. Some people don’t like the term gentrification — they prefer “displacement” or something else — and there isn’t a widely agreed upon definition of what gentrification means exactly.

Breanca Merritt, the director of the Center for Research on Inclusion and Social Policy at IUPUI, said it comes down to disinvestment, followed by opportunity. Riverside, for example, has gone through the disinvestment, and developers are now taking advantage of its proximity to IUPUI and downtown.

“There’s this feeling of being undervalued,” Merritt said of original, longtime residents in gentrified neighborhoods.

"There’s nothing to see"

The displacement of residents — specifically in predominately African American neighborhoods — has played a significant role in the formation of the city’s west side.

Most notably, the very creation of IUPUI depended on the displacement of several Black neighborhoods. While the communities are largely absent, the evidence of gentrification can today be found in the architecture — specifically apartment buildings — that fill the bustling downtown.

“I think one of the profoundest effects of urban renewal that began in the post-war period, it becomes easier to ignore heritage,” said Dr. Paul Mullins, professor of anthropology at IUPUI. “You can’t recognize the heritage of the community. They don’t borrow style from the [Madam C.J.] Walker building, and they look like they could have been dropped anywhere. If you’re just looking around downtown, there is no African American heritage, there’s nothing to see.”

Mullins said the city looks at the near west side as a “blank slate they can fill with smart development,” which he said really translates to businesses and houses most people can’t afford to live in.

"Gentrification is on the racism spectrum"

Some residents in Riverside have the same fears Carter has for her section of Martindale-Brightwood. In Riverside, new homes are going up for just under $300,000, and those homes are next to a new brewery.

“When the breweries come in, that’s how you know it’s just too late,” said Renee Davis, a fourth-generation resident in Riverside.

Davis, who briefly lived on the near east side for work, recently closed on a house in Riverside and said she feels lucky to get back before possibly being priced out.

The $300,000 homes are causing worry, but there’s also 16 Tech, an innovation district being developed along Indiana Avenue.

“We have a lot of older residents that still live here,” Davis said. “I’m really concerned that we’re gonna have an issue with predatory lending practices really taking off over here.”

Phyllis Hackett — affectionately known as “Sakina” in the community — moved to Riverside as a child with her family in 1961. They lived on the south side and were displaced by the construction of I-70. Later, in Riverside, parts of her neighborhood were cut off again — this time by I-65.

Those experiences have helped shape Hackett’s thinking. She doesn’t like pinning a word like “gentrification” to a larger problem.

“Gentrification is on the racism spectrum,” said Hackett, who bought her first home in Riverside in 1998 and now lives in her third purchased home.

Like Carter, Hackett said she’s glad people want to live in Riverside, where the median property value is about a quarter of what it is for all of Marion County, according to Indy Vitals. There are three golf courses in the area, she pointed out, plus a regional park.

Hackett isn’t very worried about displacement, though that’s contingent on reparations — or “something somewhat similar to that” — to give original residents the economic fortitude to stay in place.

A catalyst for homelessness

As of 2019, roughly 1,600 Indianapolis residents struggle with homelessness. During a June press conference, Mayor Joe Hogsett said the city is taking “a holistic approach to public safety” and is working with a “homeless outreach street team … to engage individuals who find themselves downtown without a place to stay.”

Some activists say this is a short-term solution that doesn’t adequately solve for the issues of systemic racism and gentrification in the city.

Gentrification is a series of events that happen over time, and there isn’t a lone remedy. But some believe community land trusts can be part of the solution.

A community land trust, or CLT, is a nonprofit meant to keep housing permanently affordable by buying property and maintaining control and governance. The CLT can sell or lease homes (or other buildings) that are on the land. A homeowner, for example, holds a deed for the house and a lease for the underlying land.

If a homeowner chooses to sell, the resale price is determined by a formula contained in the ground lease, which usually leads to a resale price that is lower than the market value.

Near East Area Renewal (NEAR) is in the process of setting up a CLT. It hired a consulting group last year and could have an organization established by the end of August, according to Davis, the Riverside resident who is also a housing advocate for the group.

The goal, Davis said, is to have housing units within the CLT in about a year. She identified neighborhoods close to downtown as the most likely starting points.

“We want to ensure that when we’re building houses and making houses available for people to buy, that we’re fostering long-term, mixed-income neighborhoods,” she said.

A lot of people see homeownership as a way to generate wealth. Numerous studies have pointed to the homeownership gap between Blacks and whites as one of the drivers in wealth disparities.

It could be a tough sell in some cases to get someone on board with the idea that they won’t be able to cash out later by selling their home at the market rate, and Davis said that’s something NEAR has considered as it looks for community support.

But CLTs aren’t designed as tools for wealth; they’re meant to make sure the market doesn’t hijack a neighborhood. Plus, as Davis pointed out, it’s not as though homeowners are just out of luck if and when they sell, since they can still get some equity.

Andy Beck, a co-founder of Homes for All Indy, said CLTs could help combat gentrification by allowing middle - and lower-income people to “exist in this community where the market does not allow for them to exist anymore.”

There are some CLTs with organizational structures, but Beck said he isn’t aware of a CLT in Indianapolis that has actually purchased properties.

Beck is part of the Homes for All Indy Community Land Trust Coalition, which he said meets regularly about how to promote the cause and is working on a vision for a city-wide CLT model.

Current affordable housing models let residents get into a home they would normally be priced out of, Beck said, but then they can sell the home later and turn a big profit. A CLT would make sure that home continues to be affordable for the next family.

“Safe, affordable housing is a human right,” Beck said. “My priority is providing people housing, giving people roofs over their heads, providing some stability and opportunity.”

Harrison Center will lead another iteration of PreEnact Indy