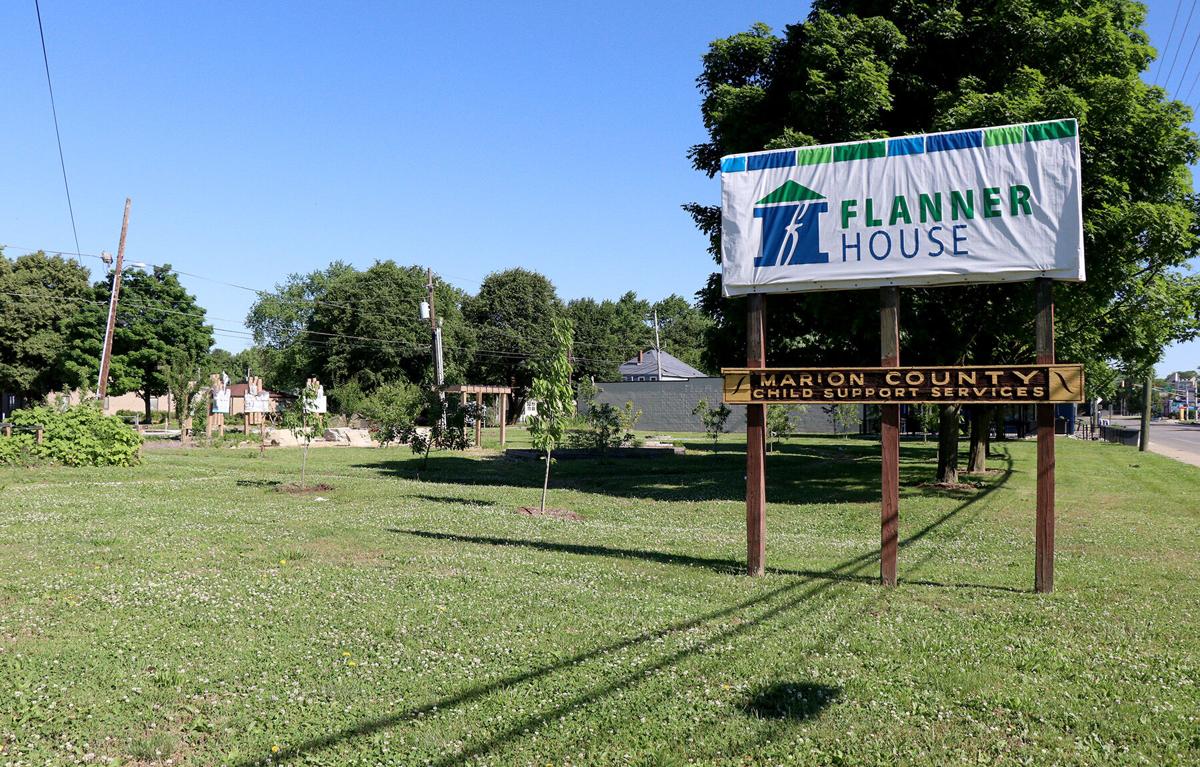 Flanner House has been an integral part of Indianapolis since 1898, helping to address needs and build community empowerment. 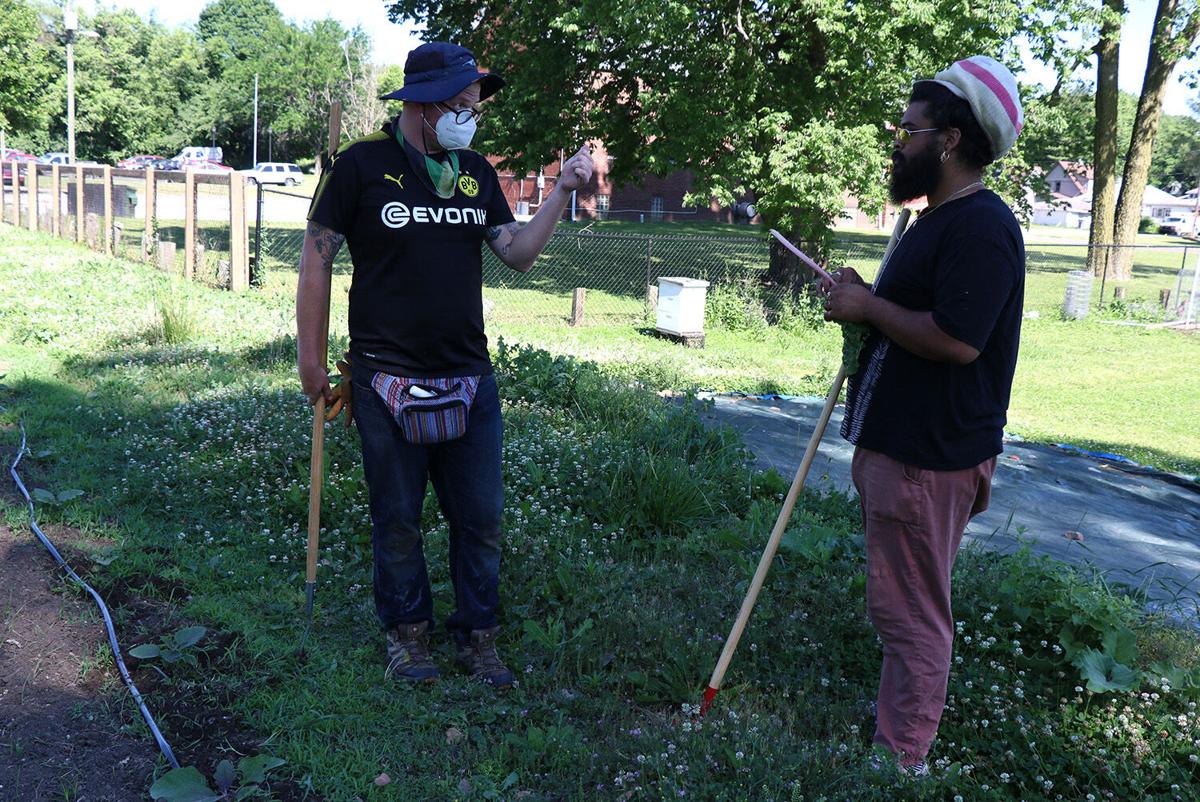 Nick Selm, left, and another Flanner Farm employee discuss what needs to be accomplished that day on the farm. 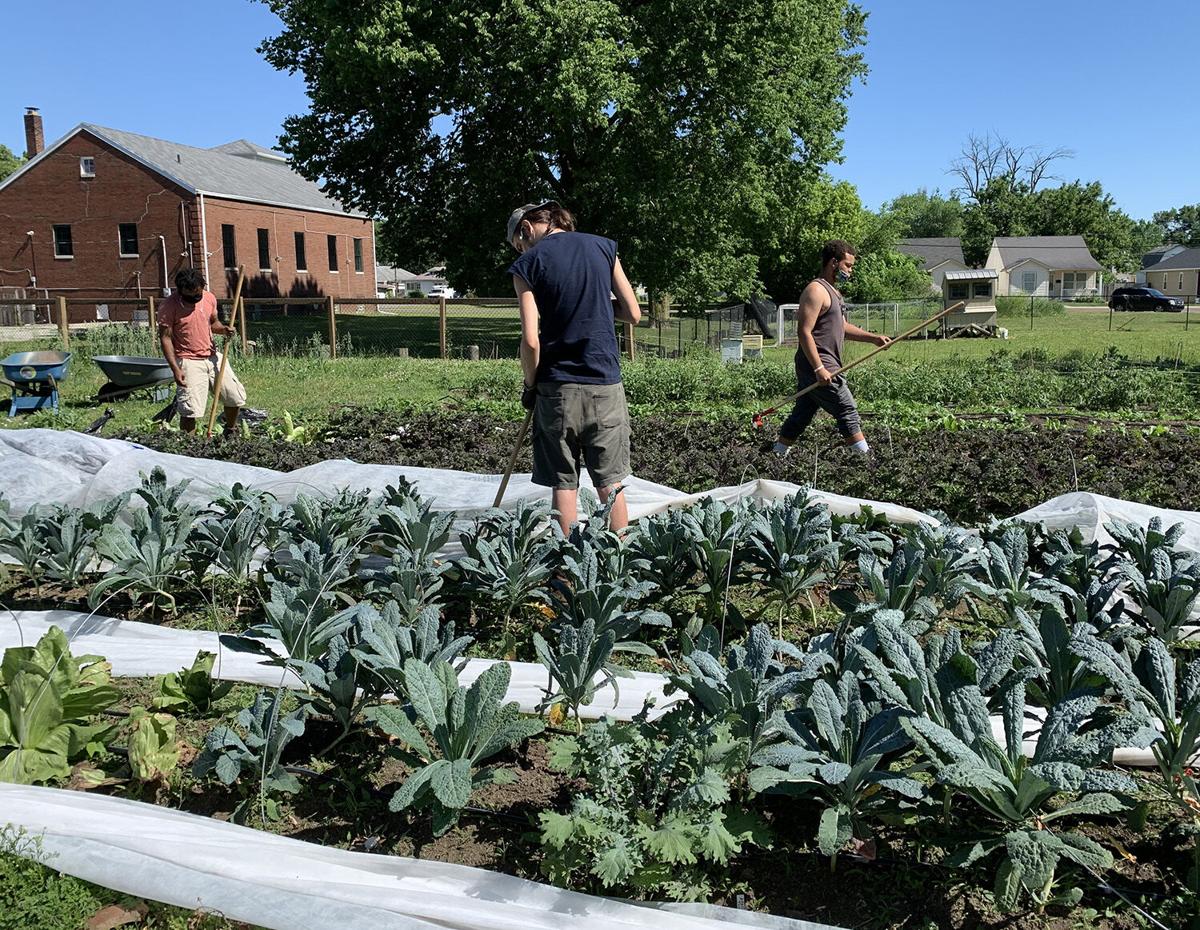 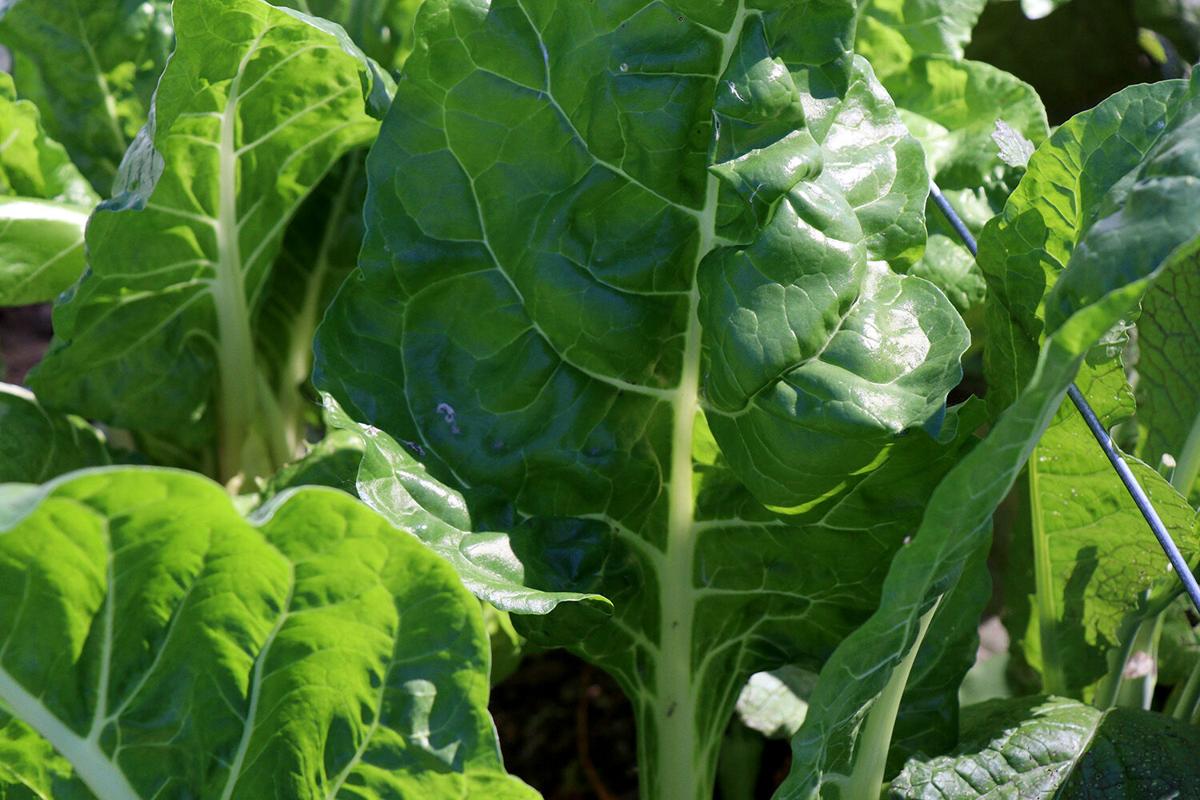 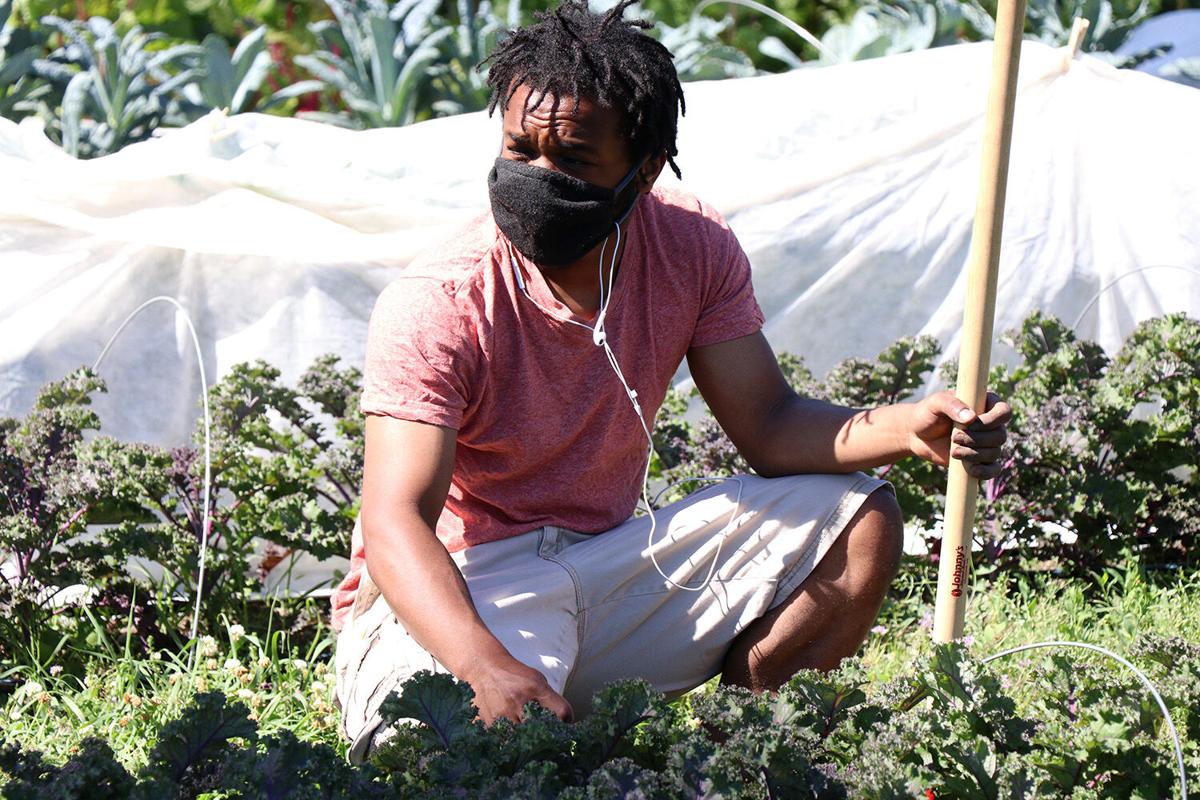 Calvin Campbell has worked at Cleo's Bodega & Cafe for a year. While Cleo’s was operating under limited hours because of COVID-19 restrictions, Campbell helped on the farm. 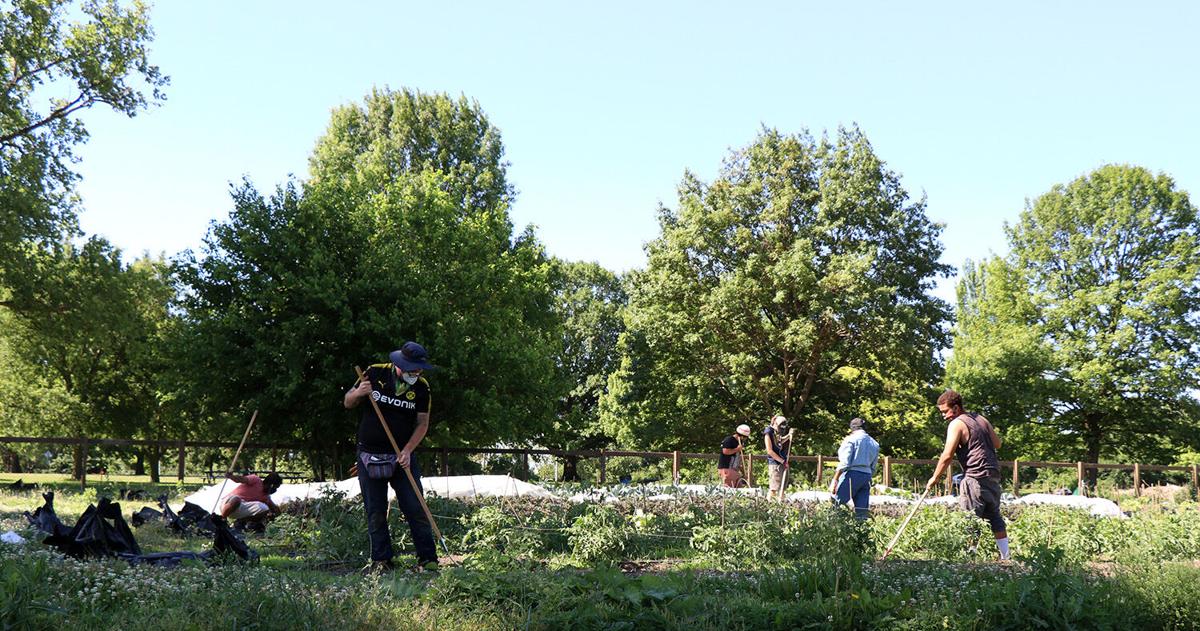 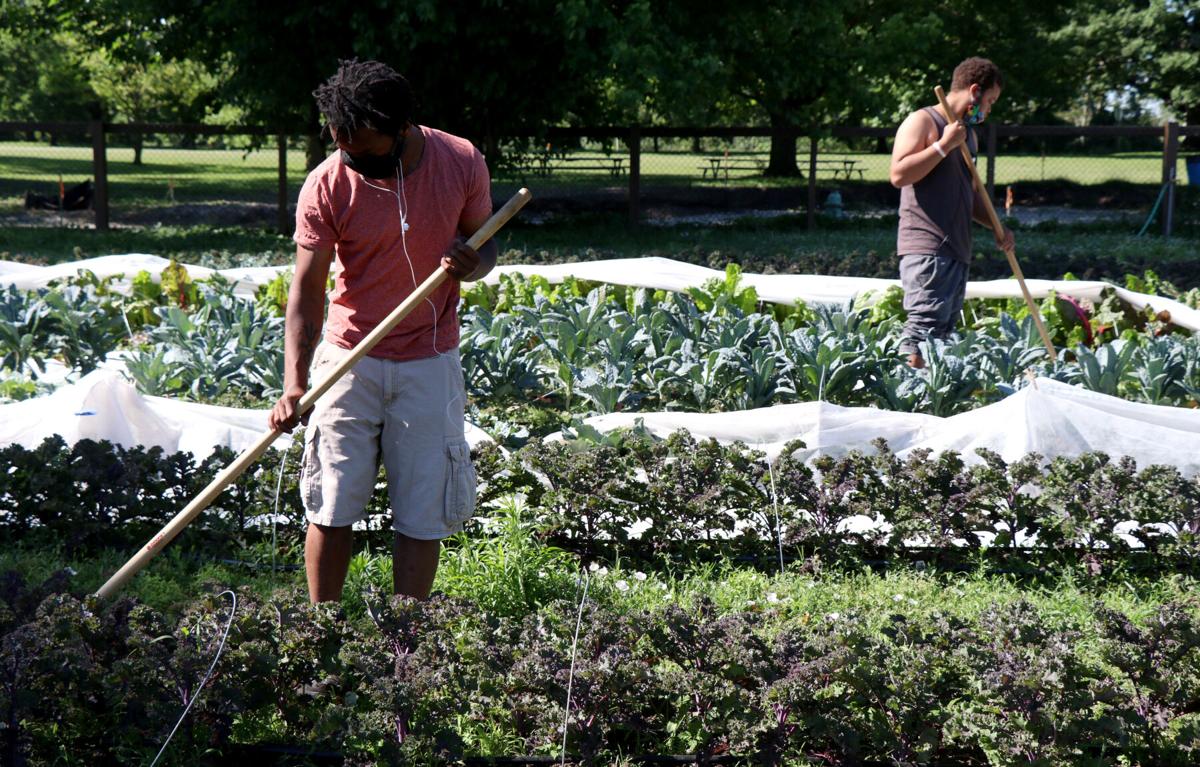 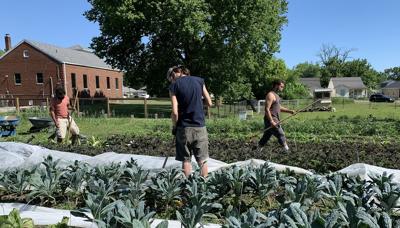 Tucked behind Dr. Martin Luther King Jr Boulevard and to the side of Watkins Park just north of downtown Indianapolis isn’t where you’d expect to find vibrantly red-stemmed Swiss chard or leafy curly kale reaching to the sky.

But there they are, along with a variety of other vegetables on the 2-acre urban farm at the Flanner House, a 120-year-old center of activity for the surrounding African American community.

Flanner House was founded in 1898 to provide social services to Indianapolis’ growing African American population, many of whom had migrated north from southern states.

The first farm was built in the 1940s. “Self-sufficiency activities,” such as gardening and canning, were taught to help people save money and access to healthy food. The farm closed in 1976, but the need for healthy food didn’t change.

The northwest side of Indianapolis is the largest food desert in the city and the state. A food desert is an area where residents have restricted access to affordable, healthy food options due to a lack of grocery stores within a convenient traveling distance. Decades of redlining practices, in which city districts were color-coded based on desirability, with the least desirable being red, have made it difficult for anyone wanting to open a grocery in the area.

The near northwest side was left without a grocery store when Double 8 Foods closed down in 2015.

In order to address this need, Flanner House reopened the farm in 2016 and began once again to teach cooking, canning and nutrition. At the same time, it developed the Farming, Education, Employment and Distribution program to help manage the farm, and to offer additional opportunities to the community.

“Instead of making overtures to corporate chains to move into the neighborhood, Flanner director Brandon Cosby made the decision to have a community-centered source of healthy produce,” said Nick Selm, Flanner House’s farm and FEED program manager.

FEED is a program for young people 16 to 24 that offers job training and education in urban agriculture and all aspects of the local food economy of Indianapolis. Participants are paid a stipend while in the program. Special consideration is given to people from the area or those who have an economic or judicial disadvantage, but anyone can apply.

Jasmine Knox, 21, first learned about FEED through a family friend who works at Flanner House. She has been in the program since November. She had no previous experience in gardening or farming.

“It’s actually changed my life,” she said. “There’s something about starting with something that is empty, to plant it and see it to grow into this, it makes you feel good about yourself, that you can accomplish something.”

The program has inspired Knox to dream about creating a similar project herself in the future.

“I would like to own a large dog sanctuary and a farm,” she said. “I would like young people to work on it who might otherwise get in trouble, to help give them a work ethic, a meaning, and teach them to garden, because if you can grow your own food, there is so much you can do with that.”

Selm, the farm manager, returned to Indianapolis from South Africa, where he worked for a few years with an urban farming organization that emphasized home gardening.

“The farm is invaluable in an area like the near northwest side where there is a chronic lack of access to food and a long, sad history of disenfranchisement and economic depression,” he said. “Reconnecting to food production is an empowering, emancipatory experience, and Flanner House is helping to facilitate that for the community.”

Addressing another need in the community, Flanner House opened Cleo’s Bodega & Café. The café is the front and the bodega is in the back, selling the produce from the farm to the community at cost. Last summer, green peppers cost 25 cents, mustard greens were $1 a bunch and eggplants were $1.50.

Calvin Campbell has worked at Cleo’s for a year and is a resident of the community. He says his parents were ecstatic when they heard about the store opening and encouraged him to apply.

“I’ve been here with it as it’s grown. I’ve seen the impact it has had in the neighboring areas and believe that is really important for this area in general,” he said.

The farm sets up a weekly produce stand along Martin Luther King Street, selling vegetables with the community’s diets and tastes in mind. It also sells vegetables to a few local restaurants.

“We want to make the farm profitable by distributing to restaurants, but our main priority is to feed the community, treating the farm not as a business, but as a utility,” said Selm.

The farm surrounds the playground area of Flanner House’s Childhood Development Center. While the children play, they watch the vegetables grow and develop a connection between the farm and their food.

“Low-income areas have been so disproportionately disconnected from where their food comes from, and there’s that big gap between what you need to do to survive and what you need to do to thrive,” Selm said. “I think in a lot of poor neighborhoods, if there is a Taco Bell or there’s a gas station and you can get cheap, satisfying food, you’re not really going to think about is this healthy. You want to feel full, and you want it to taste good.”

Selm would like to develop more participatory programming on the farm for the community. He would like people to take what they have learned at the farm back to their own home gardens and be in charge of their own plates.

“Then you’re going to see a ripple up effect in other parts of their lives,” he said. “Few things are more smugly triumphant than eating stuff you grew yourself.”

Flanner House is continuing to adapt and meet the needs of the community when a crisis hits. While state COVID 19 restrictions were in place March through June of this year, the café, bodega, and Child Development Center were closed and employees were repurposed as food distributors. The goods from the bodega were split into care packages and delivered to Flanner families.

“Mr. Cosby didn't think twice about this. Not only did it keep his staff employed, but it kept his community fed,” Selm said. “Many of our Flanner House community members are hourly service industry workers, which means that even on a good day, money is tight. Also, Mr. Cosby tried his hardest to buy foods from local black businesses so that not only would our families get fed, but local businesses would be supported.”

While Cleo’s was operating under limited hours because of COVID-19 restrictions, Campbell not only helped with food distribution but also helped on the farm. His experience there taught him he wants to start his own home garden and help other family members to do the same.

Knox planted a home garden by herself this year.

“I’ve learned the importance of growing my own food,” she said. “There were things I knew, but the experience of being here has opened me up a lot more.”