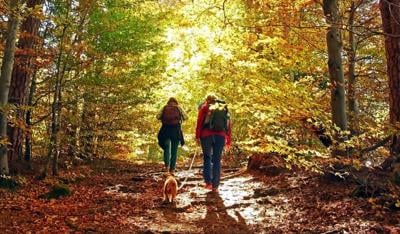 There is a rehabilitated focus by the governor’s office on tourism in Indiana. Yes, the step-child of economic development is being touted as a priority.

A report from the U.S. Bureau of Economic Analysis (BEA) Indicates Indiana already has a well-developed OR sector. BEA’s comprehensive view of the economic dimensions of OR found Indiana ranked 14th nationally in the percent of state GDP originating in OR. That’s standing right behind #13 Oregon.

However, that report includes, not only the use of RVs as a means to OR, but also the manufacture of those vehicles. A careful reading of the study shows manufacturing is 49 percent of Indiana’s OR-GDP compared with 12 percent nationally. We’d expect Indiana accommodations and food services to be more than 15 percent of OR-GDP when the national percent is 27 percent.

Fortunately, there is a 23-year-old plan to boost OR tourism in Indiana. It involves a premier hiking trail from Deam Lake in Clark County to Martinsville in Morgan County, a trail of roughly 150 miles, winding through six additional Indiana counties (Scott, Washington, Jackson, Brown, Lawrence, and Monroe). This is the Knobstone Trail, which already exists excepting a few unconnected sections. With pending Rail-Trail connections, the Knobstone will link the Indianapolis metro area to that of the Louisville area.

With its diverse levels of difficulty, the Knobstone has the potential to bring recreational visitors from near and far. However, no state or local agency identifies the eight county Knobstone as a regional development corridor.

How can Indiana realize the benefits of the Knobstone Trail?

1.   Public and private entities in the eight counties need to see the unified Knobstone as a significant asset for economic development and the quality of life.

2.   A coordinated effort by those counties to energize state government’s prioritizing South Central Indiana as a magnet for population growth, community stabilization and redevelopment, plus commercial investment.

3.   A public policy commitment to complete the Knobstone and to safeguard its physical integrity and appeal to diverse trail users.

4.   A commitment of public and private funds, joined with a sustained program of volunteer time, to establish, maintain and enhance the trail’s condition and access.

This is not a new initiative, but rather one that has languished because too few Hoosiers have been acquainted with the potential of Outdoor Recreation and the Knobstone.

Here is an eight county, regional stimulus that utilizes Indiana’s assets and will restore pride to an area of Indiana that is largely forgotten and often self-denigrating.

Let’s accelerate progress on the Knobstone and not falter for lack of vision or the courage to succeed.

Mr. Marcus is an economist. Reach him at mortonjmarcus@yahoo.com. Follow his views and those of John Guy on “Who Gets What?” wherever podcasts are available or at mortonjohn.libsyn.com