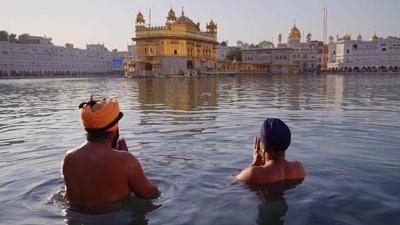 "It's a magnificent film," popped out of my mouth before my brain could censor this personal reaction to documentary-maker Gerald Krell's introductory remark, "Did you like it?"

Krell telephoned late afternoon on April 1, in response to my email with a series of topics for a preview story of his newest documentary, "Guru Nanak: the founder of Sikhism: Life and Legacy," airing at 9 p.m. on April 2, on WFYI-1public television.

We laughed at my exuberance and his chutzpah. He doesn't open a conversation with 'Hello, how are you.' He cuts to the quick. While my brain was processing what would have happened if I had not said what I said, Krell was taking the lead.

"I'd be up all night typing answers to your email questions," he informed. "so I'll just talk." What happened over the next hour, as Krell took me on his journeys of discovery across continents since 1999 with the founding of his company, became a tutorial in documentary-making.

Working as the producer/director in tandem with his son, Adam Krell, as producer-videographer-editor, "finding the common denominators" is the underlying principle for each of the now half-dozen faith-based documentaries produced by Auteur Productions, which is based in Maryland.

Delivering "interfaith understanding for a Western audience is where I'm coming from," explained Gerald Krell. "I've always approached each documentary as a learner. I really have to do my homework to connect" the viewer with the topic. So he starts with commonalities and taps into our natural inquisitiveness.

"Guru Nanak" opens as an expectant fairy-tale. "Under a full moon, a child is born in 1469. He would become the founder of the Sikh faith, the world's 5th largest world religion. A teacher, poet, revolutionary activist, his universal message of justice and equality for all, [particularly advocating for women in relation with men], service to others and honest living, devotion to nature and the environment, were well ahead of his time."

Filmed on locations in India and Pakistan and throughout the United States, Krell points out, "Nanak spoke to what is part and parcel of our American Dream. Guru Nanak founded the fifth-largest religion in the world, and yet Americans and the Western World know very little about him."

By "finding the situations and people who could validate the place of Sikhism within American principles," Krell anticipates the viewers of the documentary will join with Nanak as a "seeker of knowledge," and come to understand why in his youth he questioned aspects of his family's, and his community's, faith-based Hinduism, and subsequently how his years of journeying led him to a monotheistic faith with its own precepts, and with music as a significant bridge between people as they build relationships across all of life's landscapes.

"I listen to where people are coming from," explained Krell. "I'm always an ombudsman for the audience. As a filmmaker, it is a matter of discovery. I may have a preconceived notion, but I have to adjust to where the people [I'm interviewing] are coming from and listen to what they are saying. Preconceived notions don't work" for an honest approach to interfaith understanding… and to reach the people who have misconceptions, he adds.

"To find situations that are universal, I document what comes out of the interviews. It's the situation and the people" that he asks his audience to consider, says Krell, not his personal notions, that form the documentary.

Krell says he intuitively finds an accessible arc, so viewers feel comfortable coming along on his journey as a documentary maker about a personality who himself was on a journey of self-discovery that led to a universal discovery.

When I asked Krell, why/how within Nanak's quest 550 years ago, we now can find affirming paths within our present juncture of 'physical distancing' [my preference over 'social distancing'] and amidst a recognition of the importance of 'social caring,' there was an unexpected space of silence.

"I'm not a religious person," he offered. "I am a learner, always on a journey. Perhaps…perhaps this film was meant to come just at this time," as one way to take us back and forward to contextualize the life and legacy of a child born under a full moon, on April 14.

Perhaps, Krell and I thought in tandem, what compelled Nanak as a seeker in his epoch coincides with what was happening in other parts of the world through other seekers. Within the closing decades of the 15th and the opening decades of the 16th century, people in different parts of the world were coming to terms with the schisms they had undergone, and they were part of a developing quest for unity.

"Watch the documentary," concluded Krell, "and tell me what you take away."

I will watch tonight, and welcome everyone else's comments as part of a nuvo.net critical review. Email your thoughts to  rkohn@nuvo.net

Premiere screenings took place in New Delhi at the National Museum and for the New Zealand Parliament. The Washington DC National Press Club had its premiere "Guru Nanak" screening for national, international press and the public at large. The documentary had its NYC premiere at the Paley Center of Media.