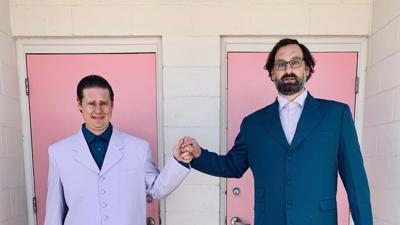 Eric Wareheim is pretty familiar with Indianapolis, but not for reasons you might expect.

“We [Tim and Eric] haven’t done Indianapolis in many years, but I used to come there in my younger days,” Wareheim says. “When I was playing in punk bands, we used to tour there. We’d mostly play people’s houses or the VFW halls in Indianapolis.”

Having now found loads of success with comedic partner Tim Heidecker, Wareheim will make his way back to the city as part of Tim and Eric’s “Mandatory Attendance” tour, stopping by Clowes Hall on Thursday, Feb. 20. Ahead of the performance, Seth Johnson caught up with Wareheim for a phone interview, discussing the evolution of Tim and Eric on stage and much more.

SETH JOHNSON: When did you and Tim first start doing these live stage shows?

ERIC WAREHEIM: It was the first thing we did. In film school, we started making little short videos, like Tom Goes to the Mayor and some other funny stuff. We would open up for bands like The Shins and some other people, and we’d show videos and talk. This was literally 20 years ago. And then, we started going to film festivals, showing our films and doing little talks. We didn’t even know what to call what we were doing. It was just kind of this conceptual, video art performance thing.

So we were doing it for a while, and then we got TV shows. And naturally, we were like, “We should promote this the best way we know how, which is with a live concept.”

JOHNSON: How similar or different is the live show now compared to back then?

WAREHEIM: It’s really funny, but it’s so close to what we did when we were 19. I think that’s what is keeping us going out and performing live. It just makes us laugh. We’re 43 now, and I think it’s funnier that we’re these older guys dressing up in spandex and doing these bad choreographed dances. Really, a lot of the humor is very similar. [laughs] Some of the songs are better. It’s almost half musical. We love singing and stuff.

JOHNSON: You mentioned the music. Do you and Tim write the songs together?

WAREHEIM: We usually sit around, and we start singing. We’ll have a concept. We have a song about dogs. We sing it and record it on our iPhone.  And then, Tim will take that little recording and compose something.

We also have another amazing guy [can’t remember his name]. He’s a guy Tim works with from Nashville. This guy took all these little sketches and added production to them, so they’re these beautiful numbers. Usually Tim and I handle it, but this guy really took it to another level.

JOHNSON: You mentioned the spandex outfits. Can you elaborate further on the costuming for this “Mandatory Attendance” show? Do you and Tim put a lot of thought and effort into costuming?

WAREHEIM: It’s funny we’re having this conversation because Tim and I are not professionals when it comes to costuming. For our first shows, we would go out and buy stuff, and the joke was kind of that the costumes were never that good. It’s the same with this tour. We love this bad, tacky look.

For the first bit, we have this very, over-the-top, almost Vegas-style outfit. I don’t want to spoil it by telling you what exactly it is, but there are a lot of shimmering diamonds and capes. We have a team of people that help us put these things together.

JOHNSON: Is the set design for these shows constructed in a similar fashion?

WAREHEIM: Yeah. The set design is pretty simple. A lot of the show consists of these video elements that act as our backgrounds. This guy Vic Berger made all the videos this year. So that’s a big part of the show. It’s almost like a character in the show.

JOHNSON: Shifting gears, you and Tim have a new show called Beef House premiering on Adult Swim in late March. Where did the initial concept for that show come from?

WAREHEIM: [laughs] It’s just so funny to hear people say the words “Beef House.” We were just kind of thinking of what genre we haven’t tackled, and we’ve never really done a sitcom series, which is so perfect for us. We just had this idea of all these guys living in a house with my wife and how horrible that would be for her. We loved that idea.

We came up with these somewhat traditional sitcom concepts, but then tweaked them in a Tim and Eric way. You watch it, and you feel this comfort. Like, “Oh, I’m in a sitcom.” But then, you start understanding what the stories are, and it becomes this demented funny version of that. It was super fun to put together.

JOHNSON: Personally, what sitcoms did you grow up loving?

WAREHEIM: I liked Seinfeld, Cheers, Perfect Strangers. … Sitcoms were kind of the first thing I watched when I got my first black-and-white TV when I was 12 or 13. That style was ingrained in our heads, as it was with a lot of other people in that generation. So it was easy to dive into that world and pervert it.

JOHNSON: What have you enjoyed about working with this Beef House cast?

WAREHEIM: Most of the guys are guys we’ve worked with in the past on Awesome Show, like Ron Auster. But then, we were like, “We should have one great actor in there,” and we asked Jamie-Lynn Sigler, who’s most famously from The Sopranos. She was like, “Yeah. I think you guys are funny. Let’s do it.”

So the set dynamic was so weird because most of the guys are not the best actors, and she’s such a good actor. [laughs] It became this weird dynamic of her just waiting for the guys to remember their lines, and that kind of became part of why it was so funny. But with the way we edited it down, everyone nails their lines, and they have all this really great character and emotion.

Hasan Minhaj is blowing up the elephant in the room

’s Hasan Minhaj gears up for a Bloomington show