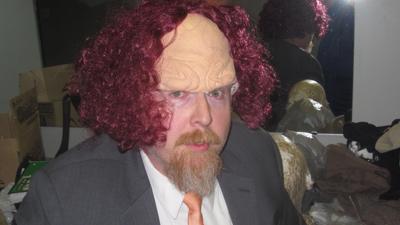 Every October, bygone comedians receive their proper posthumous tributes as part of a unique Indy tradition known as the Dead Comics Party.

“I hate having a favorite because I like to appreciate everything,” says co-founder DJ Dangler, reflecting on his favorite moments from the eight-year Dead Comics Party history. “But by far and away, my favorite was when we had Jim Henson do puppets a couple years ago, and everybody else can go straight to hell. [laughs] It was the best.”

On Wednesday, Oct. 23, the Dead Comics Party will return to its regular home at the White Rabbit Cabaret in Fountain Square. In keeping with tradition, the show will feature 15 to 20 local and regional comedians paying homage to some of their all-time favorites that have passed away.

Having performed at comedy clubs from coast to coast, the locally based Dangler stumbled upon the idea for the Dead Comics Party while chatting with some friends.

“My friends and I were talking about who our favorites were, and it was right around Halloween,” Dangler says. “We were like, ‘Oh, we should do a show.’”

“We weren’t copying anyone when we did it, but we have now seen that other folks have done it [in other cities],” Dangler continues. “It’s sprung up around here after the fact, and I take that as a compliment.”

As one might expect, however, the event has evolved over the years, ultimately turning into its own Indy beast.

“We’ve really streamlined it into an excellent show,” Dangler says. “I think back about how chaotic it was and how nuts I used to go worrying about it. But now, it’s really just an awesome evening.”

When it comes to the individual tribute selections, Dangler trust that the participating comics will do what suits them best.

“People do things that are either verbatim or inspired by their favorite comics,” Dangler says. “I don’t want to tell people how to pay tribute. The only thing I’m really proud of is I think they’ve all been labors of love.”

“The very first year we did it, I learned something that was very important,” he continues. “When somebody tells you who they want to be, that’s the right answer because that’s who they’ll do the best job at. If you’ve loved that comic, you’re going to do a good job sharing that with a room full of strangers.”

With this being said, some of the participating comics might take the stage in full costume, while others come out looking like themselves. Nevertheless, Dangler ensures it’s always a great time.

“Some people come out and it looks like an impressionist,” he says. “But one of my other favorites was we had someone who wrote a [modern] Weekend Update for Gilda Radner to read, and it was perfect. It was just a modest costume, and it was great. Some weird, fun nonsense pops up that I absolutely love.”

An Interview with Megan Gailey

After finishing third on Season 14 of America’s Got Talent, the Indy-based comic continues forward with his modest pursuit of comedy stardom