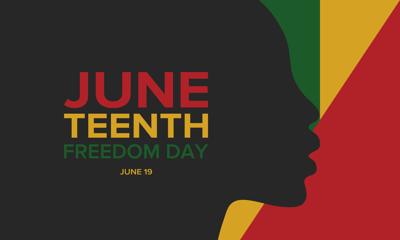 Juneteenth celebrations not only look different this year, but there’s renewed interest in the holiday that commemorates the end of chattel slavery for all African Americans.

COVID-19 social distancing restrictions and recommendations have canceled or moved most commemorations online for virtual celebrations.

In addition, recent protests to end police brutality and racial inequity and injustice have sparked vigor in a holiday often overlooked — by all Americans.

President Abraham Lincoln signed the Emancipation Proclamation on Jan. 1., 1863, and in doing so freed millions of enslaved African Americans. However, due to either slave owners purposefully withholding information or slowly-moving news, the news of liberation didn’t reach Galveston, Texas, until June 19, 1865. Since then, June 19 — or Juneteenth — commemorations have been held annually to remember the day every enslaved African American was finally freed.

Thanks to legislation introduced by former State Rep. Bill Crawford in 2010, Indiana became the 34th state to recognize Juneteenth as a state holiday observance.

Here are some of the Juneteenth events happening locally.

The local activist group Black Out For Black Lives will celebrate Juneteenth at 7 p.m. June 19 at the Indianapolis War Memorial. The group will explain the history and significance of Juneteenth.

The group also will call for justice in the deaths of African Americans who have been killed.

Edna Martin Christian Center (EMCC) will have a Community Peace Walk, starting at EMCC’s Leadership and Legacy Campus. Participants are encouraged to bring signs or other art and wear either black, red, gold or green. EMCC will provide refreshments following the walk.

Join others for a week of virtual activities to celebrate Juneteenth. Indy Juneteenth will showcase red cocktails — a staple of Juneteenth — and feature performances from spoken word artists during “Red Light Special” on June 18. On June 20, the group will host a virtual party from 3 p.m. to 7 p.m. with a drum circle and live DJs.

The Children’s Museum of Indianapolis

Due to COVID-19, The Children’s Museum of Indianapolis moved its Juneteenth commemoration online, making it the theme for its monthly Virtual First Thursday. Two former museum board members discuss race and acceptance in the video.