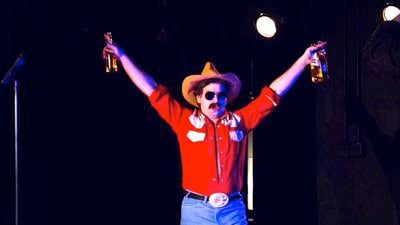 Indianapolis comedian Isaac Landfert knows his style isn’t the easiest to pin down.

“Quite frankly, I’ve always been a little outside of any box,” Landfert says. “I do character stuff, but not a lot of stand-up shows want character stuff. I do structured, improvised shows, but I’ve never done a pure improv show. So everything I’ve done has always had to be these self-made things.”

Last week, Landfert unveiled his first live album, Isaac Landfert Live at the White Rabbit Cabaret, showcasing the many sides of his comedic mastermind. For some context on the album’s release, our Seth Johnson caught up with Landfert for an in-depth phone interview.

SETH JOHNSON: I’ve interviewed you many times as a part of other comedy-related write-ups, but we’ve never really dove into your life story. That said, let’s start from the beginning: where did you grow up, and how did comedy play a part in your upbringing?

ISAAC LANDFERT: I’m from Grant County, Indiana. If you’re familiar that’s between here and Fort Wayne — it’s where James Dean is from. So I grew up in a completely rural environment. Comedy did definitely play an important role, but live comedy wasn’t something that existed anywhere locally. My dad was sort of a pre-internet comedy nerd, so he used to dub a lot of VHS cassettes and stuff. He actually would edit out profanity in movies using two VCRs and a tape deck so that he could show us things like Coming to America when we were young.

My older brother Vinny and my cousin Jake were also pretty into comedy. When I was in my adolescence and they were teenagers, they started doing stuff like making short videos. That’s something I was always aiming at and angling for, and it took me until high school to start doing some stuff. All my friends were in punk bands, and I would sometimes open shows by reading stuff or doing weird things. It took until I was 19 out on the road for me to create my first character, Jasper T. Colbaire, and things took off from there.

JOHNSON: When you say you went out on the road, were you a part of the band, or simply a comedic opening act?

JOHNSON: I was a kid in the punk scene who didn’t play an instrument, and all my friends were in bands so I kind of ended up being the manager buddy guy. I actually did manage the funds that the band made — I kept the money out of their hands after shows and put it towards investing in the band.

After high school, my buddies’ band was doing that level where they were doing small tours, or they’d do one of the small stages on Warped Tour for like 20 dates. They were all into comedy, but they were into music first. When I created the Jasper character, though, it was with those guys, and me, my brother and two of the guys in the band formed a mock band where we’d do guerrilla performances. We would just put ourselves onto shows with other bands without anybody knowing what was going on, and then we’d show up in these costumes and do this meta comedy act.

JOHNSON: So character work is really where you got your start in comedy then, correct?

JOHNSON: Were there comics that did that type of work who you looked up to when you first started doing it?

LANDFERT: Saturday Night Live was always a big thing. I always really liked guys like Mike Myers who could play an array of characters, and those characters were very fleshed out. They all had interests, dislikes and ranges of emotions, beyond just having catch phrases. Beyond that, there were people like Paul Reubens, Jim Varney and Cassandra Peterson. As I got a little bit older, there was also Sacha Baron Cohen. I just love when a character can have a life of its own, and we don’t even care who’s playing it.

JOHNSON: I know you were in Muncie before eventually winding up in Indy. Is Muncie where you wound up after high school?

LANDFERT: Yeah, it was kind of natural. Where I grew up, a lot of people ended up at Ball State. My brother had moved there, and a couple of the buddies that I was doing stuff with moved down there as well. We started doing that mock band, where it was my primary focus and their side project. We started doing these shows, and then we started making short films where we played the characters from the mock band in the movies. Those would be anywhere from five minutes to an hour long, and then we’d do premiere shows.

We did that around Muncie and the surrounding area from 2001 to 2008, and then my wife and I made plans to move to New York. In preparation of setting off, I originally did Jasper as a stand-up act and started getting my feet wet on doing a solo performance. After doing that for about a year, I started doing sets as myself as well, and my brother also started doing stand-up. I moved into that as well, so that when I moved to New York in 2008, I was equipped to go do solo performances.

JOHNSON: What was it like being in New York, and how long were you there for?

LANDFERT: We were there for barely over two years. We signed a third lease, but we had just had a kid and decided there was no way we were going to be able to afford it. So we moved to Indianapolis.

But being up there was good. I took writing and improv classes, and I did shows but I wasn’t able to do as many as I would’ve liked because my work schedule conflicted. And I was completely broke, so I couldn’t jeopardize my work. I had been working in kitchens for a decade and a half, and I couldn’t figure out any kind of way to transition into a line of work that would make me more available. But it was cool. I was able to do stuff I wouldn’t have been able to do if I stayed in the Midwest.

Before I left, I was actually able to do a second audition for Last Comic Standing. I showed up in character, so I was kind of B-reel stuff, but I made it on TV both times, which was nothing more than cool. It also gives more credence to the Jasper character because any time he does anything he brings up being on Last Comic Standing twice. [laughs]

JOHNSON: You mention that it was tough being in New York with a family. That being said, it would seem like your current curatorial role with the White Rabbit Cabaret is a much better fit. How did you get tied in with the White Rabbit, and what has your relationship with the venue meant over the years?

LANDFERT: When I moved to Indianapolis, I knew some people because I’d been coming down and doing stand-up before I left. A friend had recommended Fountain Square to us. They were like, “You’re coming from New York. You’ll want some walkability. The city is not that walkable, but this neighborhood is.” When I moved in, I got lucky. Tad Aschliman was my neighbor and meeting him helped tremendously with integrating into the neighborhood.

Ben Sutton [former frontman of hardcore band In the Face of War] and I had known each other for 20 years from the punk scene, and he was living in a house two doors down from where I had moved. I bumped into him outside of the Dugout one day, and we were talking about comedy. He mentioned this place called the White Rabbit that had been open for less than a year, and that he figured they would want to do stand-up.

I walked in, and it was when Andy [White Rabbit co-owner] would still bartend. There was a flyer for INDYPROV on the bar, and I was like, “Oh hey! You guys have improv here.” And the first thing he said was, “Yeah. We have improv. It’s alright. If I had it my way, I’d love to have some stand-up.” I was like, “Oh shit. Well that’s why I’m here.”

I met with Debra [the other White Rabbit co-owner] after that, and we started doing a monthly stand-up show. Little by little, I started inching my way in more. I worked the door, and then we started producing shows together. Eventually, it just rolled along and grew.

JOHNSON: What was the first show you ever produced there?

LANDFERT: It was a monthly stand-up show that we called the Absurd Third-Thursday Stand-Up Showcase, and we ran it for about six-and-a-half years. Along the way, other comics started coming around because of that show, and we started building relationships. That’s where Let’s Make A Date, An Evening with the Authors*, Speakeasy and all these other events came from, which comics brought to the venue.

JOHNSON: Your album, Isaac Landfert Live at the White Rabbit Cabaret, came out last week. Was that the first live album you had ever recorded before?

LANDFERT: Yeah, it was my first, and I waited a long time to do it. 2001 is when I say I started comedy. Even though I’d been trying to do things before that, it’s when I started Jasper and jumped in. At the time, I never would’ve thought it would be any kind of career, and I definitely wouldn’t have thought I’d still be doing Jasper 19 years later. But I made a mental checklist of what I would want to do if I had the opportunity, and an album was always one of the things on there.

I shelved the idea for a while because I figured it was going to end up being expensive to do it the way I wanted to do it as a sketch album. But about a year-and-a-half ago, I was like, “You know what? Fuck it. I’m just going to do a live album. In the last 10 years that I’ve been with the White Rabbit, live performance has been the real focus. Let’s do an album that showcases what I’ve built in this format.” So I did the multiple characters to showcase the kind of comedy that I do.